Elephant in the room | Inquirer Opinion

Elephant in the room 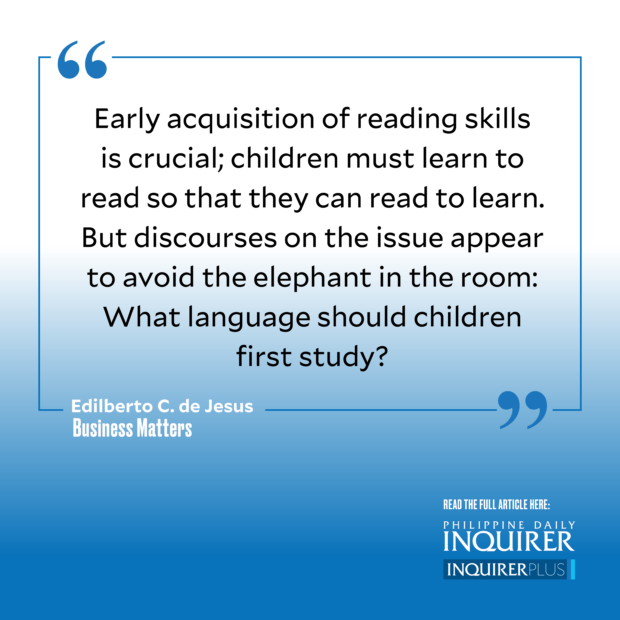 Ninety percent of Filipino children, ages 10 (out of school or at Grade 3 level), cannot read simple texts. World Bank’s diagnosis of our learning poverty has unleashed a fresh wave of alarm and lamentation at the state of Philippine education—already exposed two years ago by international assessment results. The Philippines ranked lowest in the Pisa reading test for children in middle school, and performed lower than expected in an Asean test of peer countries.

Early acquisition of reading skills is crucial; children must learn to read so that they can read to learn. But discourses on the issue appear to avoid the elephant in the room: What language should children first study? Exceptional in Southeast Asia, the majority of Filipino children take international assessment tests in a language not their mother tongue. Philippine educators worry, however, that reading tests in Filipino, the national language, would yield even poorer outcomes.

Although probably now the most widely used lingua franca in the country, Tagalog, rebranded as “Filipino” and first adopted by Executive Order No. 134 in 1937 as the national language, is not the mother tongue of most Filipinos. Experts estimate over 150 living languages spoken as mother tongue by Filipino children. But even before globalization, cable television, and the internet turbocharged its spread, Filipinos sought proficiency in English, cultivated in the elite private schools as the key to status and employment. The Department of Education (DepEd) has long recognized our problem of language diversity and the orientation to English, since at least the term of Secretary Andrew Gonzalez FSC (1998-2001).

Before his DepEd appointment, Brother Andrew, a former De La Salle University president and a Berkeley Ph.D. in linguistics, had published studies supporting the Unesco call for children’s education in the mother tongue and its use as their first medium of instruction (MOI). In 1999, Brother Andrew launched the Lingua Franca Education Project as a modest response to the Unesco advocacy.

LF prescribed using Tagalog, Ilocano, or Cebuano as MOI in Grade 1 experimental schools. In partnership with the Summer Institute of Linguistics, DepEd has already started conducting, as a pilot project, the First Language Component (FLC) Bridging Program in the Lubuagan school district of the Cordillera Administrative Region’s Kalinga Division. From Grades 1-3, the FLC strategy focused on developing speaking, reading, and writing skills in the Lilubuagen mother tongue and its use as the MOI for other subjects. Filipino and English were taught as the second and third languages (L2 and L3).

FLC initially met opposition, even from DepEd teachers in Kalinga, who felt the initiative implied doubts about their professional competence and diminished their prospects (and those of their students) for advancement. Beyond Kalinga, critics worried that the focus on mother tongue instruction would take time away from learning English. Their premise, seen in the practice of elite schools, was “submersion” as the effective strategy in learning the preferred language, limiting the use even of Filipino in the school to its designated class hour.

DepEd struggled to convince skeptics of its commitment to English (and Filipino) competence and the limits of the “submersion” strategy. As Brother Andrew had noted, submersing children in a language they do not understand will not work; if children cannot understand the language the teachers use, they “simply cannot learn the subject matter.” Instead, teachers must use the mother tongue as a transitional language, the language they know best, until Filipino or English can take its place. International research had shown that children who learn to read and write in their mother tongue more quickly develop literacy in other languages.

Some sectors still hope to recover English as our common medium of communication. Sadly, that ship sailed 50 years ago. Meanwhile, Sen. Robin Padilla, who topped the 2022 senatorial race, admits that he cannot follow Senate deliberations conducted in English. Secretary Erwin Tulfo complains about the government (including his own DSWD) choosing to communicate in English (pa-English-English pa). Check also the use of English in print and broadcast media, including cable TV.

Hard to avoid stepping on elephant dung. Or being stepped on by the elephant.