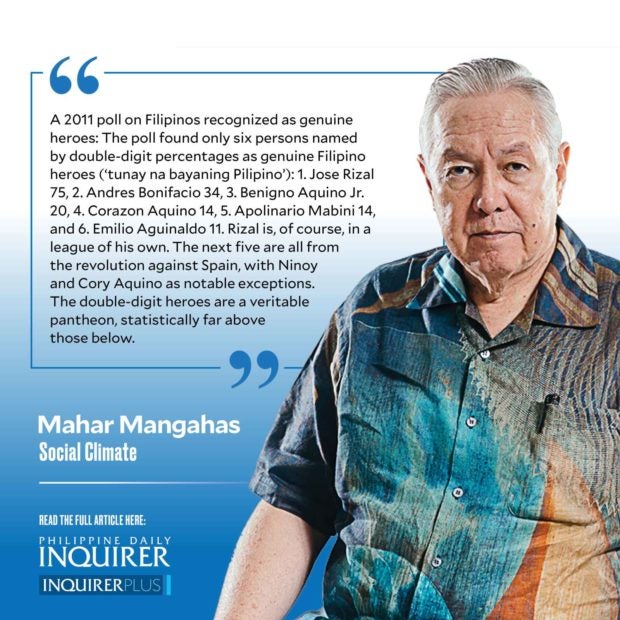 Last Monday, Aug. 21, SWS communications man Leo Laroza searched our website using the phrase “Ninoy Aquino.” He found two survey reports—one in 1999 on the importance of a number of 20th-century events, and another in 2011 on genuine Filipino heroes—and shared them at the weekly staff meeting as context for National History Month and the death anniversary of Ninoy Aquino.

A 1999 poll on the importance of 14 events of the 20th century. In its final survey of the last century, Social Weather Stations laid out 14 events on separate cards before a national sample of 1,200 adults (3 percent error margin). The respondents were asked to look at all the cards and then indicate whether an event was “one of the most important that happened in the Philippines, very important but not the most important, somewhat important, or not important” (“Edsa revolution is Philippines’ most important event of the century—SWS survey,” www.sws.org.ph, 12/29/1999).

Note that the poll did not ask for the events to be ranked against each other. There was no limit to how many events could be called “most important.” The total percentage of “most important” answers is 209, meaning that, on average, the respondents rated two events that way rather than only one.

This non-commissioned survey asked a national sample of 1,200 adults in March 2011: “Who are the persons whom you consider a genuine Filipino hero? You can name up to 5 persons.” It offered no list to prompt the respondents.

Rizal is, of course, in a league of his own. The next five are all from the revolution against Spain, with Ninoy and Cory Aquino as notable exceptions. The double-digit heroes are a veritable pantheon, statistically far above those below.

There were 15 percent whose nominees did not merit a single percentage point when rounded. Three percent said they had no hero, and 3 percent refused to answer. Thus, 94 percent had at least one hero to nominate. The average number of heroes named was 2.3, or only half of the permitted limit.

Social surveys are scientific documentations of history from below: what the people say that they know and value, of the nation’s past.