The slow, rough road to school 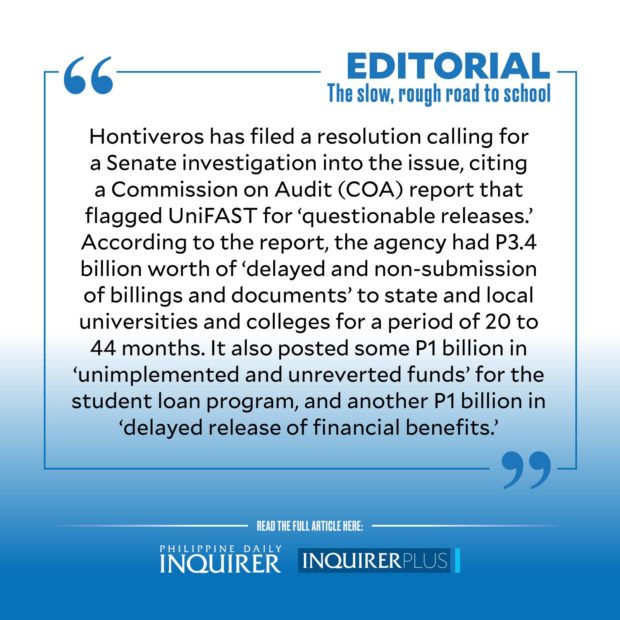 Until hundreds of college students complained to Sen. Risa Hontiveros about not getting the promised cash grant from UniFAST, little is known about the P7-billion funds earmarked for such assistance by this agency attached to the Commission on Higher Education (CHEd). UniFAST stands for Unified Student Financial Assistance System for Tertiary Education.

Most people who saw the chaotic scenes at the distribution of the education cash aid by the Department of Social Welfare and Development (DSWD) on Saturday only know about the P500 million that Social Welfare Secretary Erwin Tulfo announced was available for indigent students from the elementary to the college level. At least 29 were hurt when parents and students scaled walls, rushed the gate, and stampeded their way to the DSWD offices for the promised P1,000-P4,000 government subsidy. Tulfo, who apologized for the scenario straight out of a zombies apocalypse movie, blamed “miscommunication” for the fiasco.

Just as desperate are the UniFAST grantees who have waited years to be given the assistance mandated under Republic Act No. 10687, or the UniFAST Act. The law, signed on Oct. 15, 2015, mandates free tuition and other fees for poor students wanting to pursue college education.

Hontiveros has filed a resolution calling for a Senate investigation into the issue, citing a Commission on Audit (COA) report that flagged UniFAST for “questionable releases.” According to the report, the agency had P3.4 billion worth of “delayed and non-submission of billings and documents” to state and local universities and colleges for a period of 20 to 44 months. It also posted some P1 billion in “unimplemented and unreverted funds” for the student loan program, and another P1 billion in “delayed release of financial benefits.” The report traced the nonimplementation of RA 10931, or the Universal Access to Quality Tertiary Education Act, for more than four years “to the absence of a loan repayment mechanism.”

CHEd chair Prospero de Vera said the issue had been addressed by CHEd-UniFAST in its reply to the COA, a claim disputed by the senator. Saying such “so totally dismisses and gaslights the students who have been following up for years to receive what is due them, as they now struggle to re-enroll in school,” Hontiveros added.

The senator said that in her first four days in office, she received more than 300 complaints via email from both students and institutions. “Some scholars even shared that they cannot even apply for or avail of other scholarships because they are listed as UniFAST scholars even if CHEd has not sent them any updates since signing the contract. These UniFAST lapses, ironically, are literally standing in the way of the students’ right to education.”

CHEd even launched a social media campaign soliciting testimonials from scholars with its own campaign hashtag #IStandWithChedUnifast to defend the agency, but the PR attempt fell flat and gathered more complaints from grantees:

“We have not [received] our TDP (Tulong Dunong Program fund) for the past two years but you keep on forcing us to renew requirements. Many students have a similar problem, so we can’t help but wonder where the funds are going,” a grantee commented on the post. Said another: “Could you at least respond to our cases through email or through a call?”

On top of the unexplained, probably misused, UniFAST funds, the COA also flagged the CHEd for overpaying by as much as P130 million to three public higher educational institutions due to “inadequate” control mechanisms and accounting review process.

The much-delayed UniFAST grants and CHEd’s overpayment of tuition and other school expenses to several colleges are just the latest scandals to hit the education sector, with the Department of Education (DepEd) yet to fully explain its allegedly questionable purchase of P2.4 billion worth of “pricey” and “outdated” laptops for public school teachers. The overprice reduced the number of intended beneficiaries from 68,500 to 39,583 public school teachers.

This week’s school opening also exposed the lack of preparation by regional DepEd offices, which have yet to solve the perennial problem of lack of classrooms and chairs, as well as leaky facilities and flooding because of intermittent rains. With millions of students back for in-person classes, the transport sector also failed to provide enough public conveyances, adding more burdens to students and their families.

All these problems show how unprepared the education sector is in resuming in-person classes despite two years of opportunity to put things in order. Scenes showing students sitting on the floor or holding classes in flooded classrooms at the opening of this school year should prompt education officials to seriously address the most basic requirements, such as adequate classrooms and educational aid for poor students, instead of ROTC and other less urgent concerns.