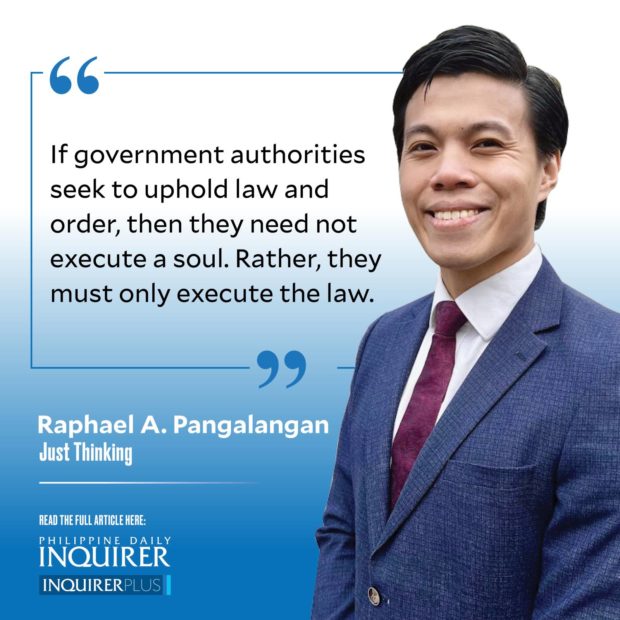 The year of our Lord 2006 was the pinnacle of a bout of a lifetime.

At the blue corner stood the abolitionists, seeking to wipe out judicial executions from the Philippine legal order. On the red corner were the retentionists, who sought to preserve the status quo and “strike fear into the hearts of criminals” through the ultimate threat of capital punishment.

On June 24, 2006, then President Gloria Macapagal Arroyo signed Republic Act No. 9346 into law, prohibiting the imposition of the death penalty in the Philippines. Notably, the law expressly repealed RA 8177 (“An Act Designating Death by Lethal Injection”), RA 7659 (the “Death Penalty Law”), and “all other laws, executive orders and decrees, insofar as they impose the death penalty[.]”

The following year, the Philippines joined the Second Optional Protocol (OP2) to the International Covenant on Civil and Political Rights (ICCPR) and bound itself to “abolish the death penalty within its jurisdiction.” OP2 was ratified on Nov. 20, 2007 (albeit without Senate concurrence—more on this another time).

All this to say: It was a big year for the abolitionist movement. The battle was won! But be that as it may, the war was far from over. Indeed, it continues to this day.

Over the past 16 years since RA 9346, a total of 37 bills have come before the lower house proposing the reincorporation of the death penalty—24 of which were proposed during Duterte’s presidency. At present, four remain pending before Congress: Senate Bill No. 198 and House Bill Nos. 501, 1543, and 2459.

SB 198 seeks to revive RA 8177 for the crime of “large-scale illegal drug trafficking,” while HB 2459 would impose the death penalty for foreigners who violate RA 9165 (the Comprehensive Dangerous Drugs Act of 2002). HB 501 proposes the death penalty by “hanging, firing squad, or lethal injection” for “certain heinous crimes,” such as qualified bribery or possession of marijuana.

The least nuanced of the bunch is HB 1543 by Surigao del Norte 2nd District Rep. Robert Barbers, which proposes the repeal of RA 9346 but makes no mention of reviving RA 8177, et al. As pronounced by the Supreme Court on countless occasions: “When a law which expressly repeals a prior law is itself repealed, the law first repealed shall not be thereby revived unless expressly so provided.” Hmmm… Sounds like someone may need a crash course in statutory construction!

Now, one might think we could end this conversation by simply pointing out to our dear legislators/death penalty revivalists that these proposals would violate the Philippines’ international obligations under the ICCPR and OP2, but one hath another think coming. Invoking international norms in domestic processes, after all, is like listening to a Kantian debate with a utilitarian in a late-night inuman. It’s not so much that they are arguing with each other, but past each other.

Each of these proposed legislations, in many a varied way, builds upon a singular assumption: that the fear of death will deter crime. Otherwise known as the “deterrence principle,” our legislators assume that the more severe the penalty, the less likely the crime. Alas, if only it were so simple.

Allow me to engage you in a quick mental exercise: All of us have jaywalked at some point in our lives. My question is: Would you still have done so if the penalty for jaywalking was death? The answer would likely be “no.” Now, what if the penalty were less severe, say, a fine of P1,000? Likely, the answer would still be a “no.” That’s a lot of money, after all. But what if the fine were lessened to a measly P1, or a stern finger-wagging, might you still have trudged beyond the zebra crossing?

I would often pose this exercise to my students, and though the lot of them would easily afford to pay the P1 price, they still would not jaywalk—or so they claim. But then, I gave one last iteration of the problem. I asked: Regardless of the penalty, would they jaywalk if they knew no one was watching? Would they cross regardless of the “ped xing” if they were certain that they would get away with it?

As one may imagine, this elicited different responses. While some students feigned holier-than-thou loyalty to the crosswalk, the class recognized the point that I now here make: societal conduct is not shaped so much by the severity of punishment but the certainty of it.

Studies have shown that increasing penalties does little to deter crime. What more for the ultimate penalty: capital punishment. Indeed, severity and certainty may at times have an inverse relationship, where increased penalties would deter a victim from reporting the crime. This would be the case, say, for crimes committed by family members.

If government authorities seek to uphold law and order, then they need not execute a soul. Rather, they must only execute the law.