The crowds and desperation | Inquirer Opinion

The crowds and desperation 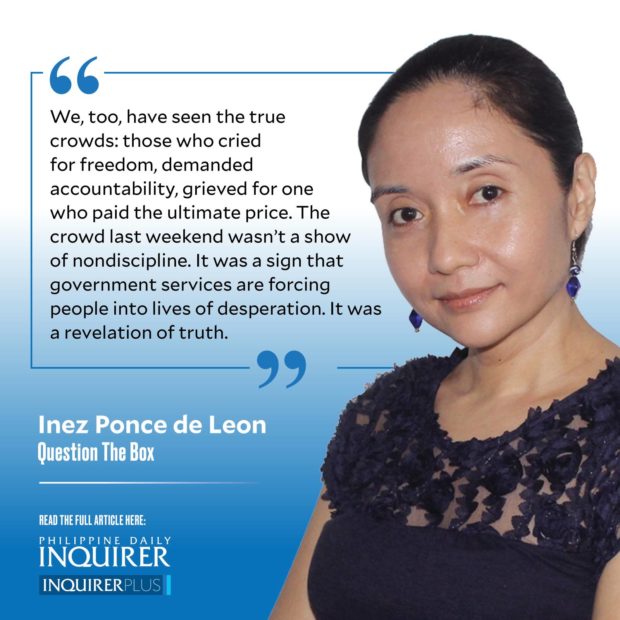 The photos of last weekend’s Department of Social Welfare and Development (DSWD) debacle were both pitiful and nightmarish: thousands of people, who had spent at least half the night lining up for a few pesos in educational aid, were pressed against the agency’s gates across the country. They had waited in the heat, rain, sweat, and humidity, only to be kept outside in droves of bodies and shared breaths.

In the end, the DSWD was forced to apologize for what it called miscommunication, and was advised to coordinate with local government units (LGUs) to distribute aid more efficiently. This should have been the first thing that the DSWD did, if it knows how trust networks operate. LGUs know their zones, people, and communities best. Centralization of aid distribution would predictably end in both injuries and unfinished business.

Many of the crowd photos were framed rather craftily: some showed staff members standing on the fences, working against the flood of humanity, with the words “Task Force Disiplina” emblazoned across their backs. The photos imply that their task is to subdue an undisciplined mob, prompting some internet users to recommend military training to wipe future chaos out, and even laugh at the crowd for voting for the wrong people.

The sneering was neither compassionate nor necessary. Those seated on soft chairs in air-conditioned rooms will not understand what it means to have a dream of molding the next generation to be better than the first, while contending with not having enough money to feed one’s family. A keyboard warrior (i.e. troll) simply needs to copy-paste replies or pound away at their keyboard; those who agree with them (i.e. the gullible) will burn a few calories in shaking their heads.

It is easy to blame the poor for their manners when one never has to worry about the most basic needs. A tip, therefore, for those attempting to impose profundity on their so-called “hot takes”: Leave the “no discipline” groans for the motorists who can’t keep to their own lanes or the politicians who steal from the country’s coffers. No military training will ever cure those.

What happened last Saturday was neither isolated nor uncommon if we look at it as something to be expected from people who have dreams that they refuse to let go of.

We have been, at one point or another, in waves of humanity, in crowds of souls, in floods of voices and dreams. Only three months ago, tens of thousands of us were in the Pink Rallies. Yes, we didn’t press against each other or go on stampedes, but we were still a crowd dreaming desperately for change in governance—for the kind of governance that respects its people rather than turns them into dogs begging for scraps.

Only six years ago, people lined the streets to protest Marcos’ burial at the Libingan ng Mga Bayani, mere hours after the news broke. We at the Ateneo walked out of our classrooms and shouted our anger on the streets. It was a time when we were desperate for peace and rationality, a time when people were being shot in the dead of night and labeled “drug addicts” in the morning.

And not long before that, thousands marched to pay their respects to the assassinated senator who would have come home to a jail cell, but whose murder would later set the country free.

The pictures don’t lie. History is not gossip. No amount of Red-tagging or malicious hashtagging can erase the fact that the senator who once gave his life to the country is really, truly a hero.

We are people who reveal themselves in the voices of crowds. We have seen make-believe droves: the trolls online with their nonsensical diatribes, the bus-ferried groups that leave just as their supposed prized candidate starts talking.

But we, too, have seen the true crowds: those who cried for freedom, demanded accountability, grieved for one who paid the ultimate price.

The crowd last weekend wasn’t a show of nondiscipline. It was a sign that government services are forcing people into lives of desperation. It was a revelation of truth.