Deathmatch among the faithful | Inquirer Opinion

Deathmatch among the faithful 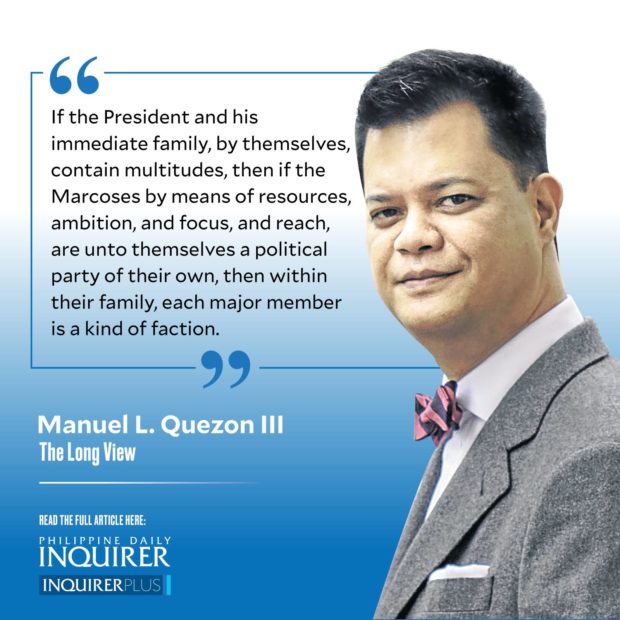 As the tired—but not so tired that it stops being relevant—old saying goes, the more things change, the more they stay the same. Presidents come and go, but every administration assumes power by assembling a coalition, which then temporarily assumes direction of the one-party system we have always had (the one party being the permanent administration party), which temporarily mutates to accommodate the new factions that rise and fall within each governing coalition. In terms of the current dispensation, a major component of the ruling coalition is not a party, but a family: the First Family.

It is in these terms that much of the ongoing political buzz, both above and below the fold so to speak (that is, in what’s fit to print and in the rest that zips around social media and chat apps), can be best understood. If the President and his immediate family, by themselves, contain multitudes, then if the Marcoses by means of resources, ambition, and focus, and reach, are unto themselves a political party of their own, then within their family, each major member is a kind of faction. There is the President, as patriarch and heir; there is the First Lady, who should be the matriarch except there remains the better-known and much more experienced Matriarch-Mother, the former first lady; there are, too, what the French would have called the Princesses of the Blood, the President’s sisters, and the endless permutations of who, exactly, gets along with whom.

Knowing this, two separate topics of conversation can begin to be dissected.

There is the ongoing fight, being fought out in the opinion papers on both old and new media, concerning the Executive Secretary. This is a position that is filled on the basis of near-absolute trust on the part of any president, the only question being if there are others holding other, close positions who are also known, and thus are identified to enjoy, a similar, equal, or, rarest of all, a superior amount of presidential trust. That there has been a sustained, blunt, and daring campaign against the Executive Secretary points to very powerful forces, indeed, being able and willing, this early on, to point fingers at someone put there by the President himself.

And there is the saga of the latest movie version of the Marcos Story, “Maid in Malacañang.” Here, the curious content of the film (as one can glean it from the many amusing reviews that have popped up) can only feed the uncomfortable impression that the impresario behind the film—the President’s eldest sister—has left an indelible mark on the production. It’s a stamp that is not complimentary of the (current) President, her brother, much as it promotes a warm, loving, fond impression of the President (her father), and her opinion of what his opinion was, of his eldest daughter. The former first lady, for her part, might have found little surprising in the telling, though one has to wonder what the current First Lady thinks.

The point is that family factionalism is on display even as coalition factionalism plays out, with appeals being made to communications, good governance, efficient administration, and similar “unself”-interested things, by people who would be the first to be indignant if their erstwhile affiliations—to, take your pick, former president Arroyo, the First Lady herself, the Iglesia ni Cristo, ad infinitum and ad nauseam—happen to be brought up. Having seen factionalism up close, let me be the first to insist that this is actually about the assertion of belonging—who, of the contending sides, is actually, truly, looking out for the President out of loyalty?—than it is about more mundane and disreputable things such as personal or factional gain.

In a lecture (“Considering the Slave Trade: History and Memory,” 1998), the American historian Bernard Bailyn wrote, “As historians we shrink from telescoping past and present, hoping to explain the things that happened for their own sakes and in their own terms. And we select from the documentation what seems to illuminate the outcomes, which we, as opposed to the people in the past, are privileged to know. But we do so critically, skeptically, because we know that we can never recapture any part of the past absolutely and completely. So we keep our distance from the past, from the stories we tell, knowing that facts may be uncovered that will change our stories.”

He went on to contrast this professional reticence with popular feelings concerning places identified with the past. “But memory,” he wrote, “is something different. Its relation to the past is an embrace. It is not a critical, skeptical reconstruction of what happened. It is the spontaneous, unquestioned experience of the past. It is absolute, not tentative or distant, and it is expressed in signs and signals, symbols, images, and mnemonic clues of all sorts. It shapes our awareness whether we know it or not, and it is ultimately emotional, not intellectual.”

To be sure, as it holds the reins of power, an administration is only in the process of making history; it is only in the midst of engaging in governance. But it is also, daily, engaged in the making of memories, of that frantic effort to make itself memorable when so little of what governments do can actually qualify for the distinction. This, I would argue, more than mere money-grubbing or political preening, is what is at stake, both within the family and the coalition arenas, not to mention the larger one of country and national memory.