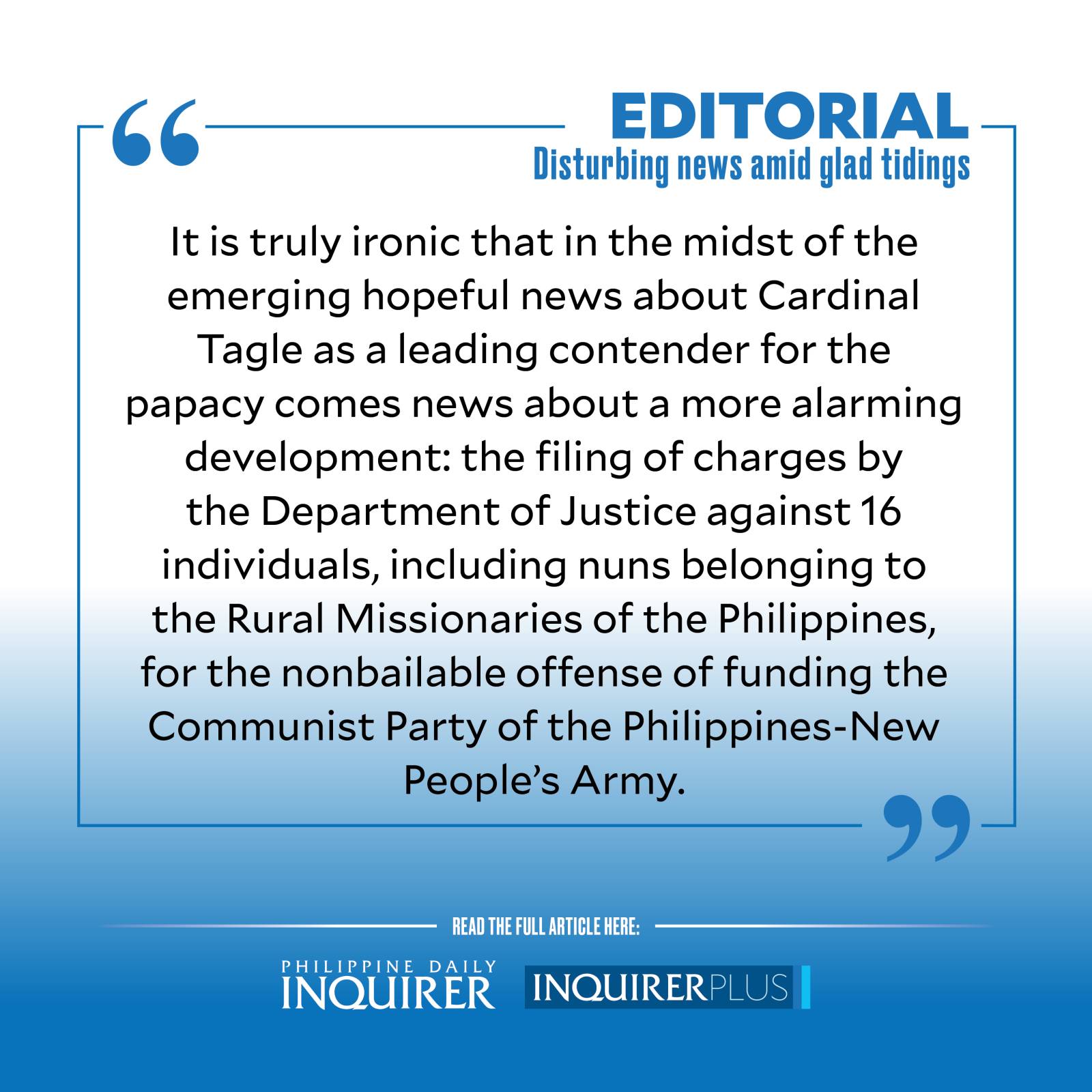 Thrilling news indeed, not just for Filipino Catholics but for all our countryfolk here and abroad, is the possibility of the selection of a Filipino prelate as the next Pope. The man in question is former Manila archbishop Cardinal Luis Antonio Tagle, who in recent years has been appointed to head different high offices in the Vatican, an indication of his growing influence in the Catholic establishment.

Catholic Herald, a London-based magazine, reported that in the event of a potential resignation by Pope Francis due to his health, Hungary’s Cardinal Erdő, a conservative canon law expert, and Tagle, seen as representative of the Church’s progressive group, are leading contenders to become the next Pope.

Indeed, the emergence of Cardinal Tagle as a “papabile” and of the Philippines as the country of origin of the possible successor of the ailing Pope is indicative of the direction being taken by the institution. From a “Euro-centric” Church, it is now seen as moving toward becoming a truly internationally representative Church, with greater numbers of people from the global South walking its halls of power. And within Asia, the Philippines, with its majority Catholic populace, is emerging as a center of the Catholic faith five centuries after the arrival of the first missionaries—traveling here with conquering armies.

This is why it is truly ironic that in the midst of the emerging hopeful news about Cardinal Tagle comes news about a more alarming development: the filing of charges by the Department of Justice (DOJ) against 16 individuals, including nuns belonging to the Rural Missionaries of the Philippines (RMP), for the nonbailable offense of funding the Communist Party of the Philippines-New People’s Army.

Red-tagging of personalities and institutions linked to the Church and those of other religious denominations is nothing new. Indeed, foreign missionaries have even been deported most recently in 2018, including Australian Sister Patricia Fox and Protestant missionary Adam Shaw, for allegedly engaging in “political activities.”

Before the formal filing of charges against the RMP sisters, the Anti-Money Laundering Council already froze three of the congregation’s bank accounts in 2019, based on testimonies of two informants claiming to be former communist rebels.

The RMP, which has consistently denied being a Communist front organization, has denounced the filing of charges by the DOJ, calling it “part of worsening state repression against human rights defenders.” The Rural Missionaries is composed of religious from different orders who are devoted to “service to the rural poor.” In fact, the group observed its 53 years of service to the country’s poorest and most powerless last Aug. 15, the very day the DOJ decided to file charges of “terrorist financing” against them.

RMP also “expressed serious concerns for the safety of those charged,” noting that two of them have already been thrown into prison on what it calls “trumped-up” charges.

Lending credence to the RMP’s apprehensions has been the spate of killings of people who have either landed on the Red-tagging list or were being surveilled prior to being brought in for questioning.

Reporters who sought a copy of the DOJ resolution filed before the Iligan City Regional Trial Court were turned away, with a DOJ official citing “privacy” as a reason for withholding the document from the public eye. And yet the DOJ has lost no time broadcasting the filing of charges against the nuns and labeling the RMP a funder of terrorist groups.

In its defense, the RMP said its projects went through “rigorous processes of selection, monitoring, and auditing by its respective donors, such as the European Union, the United Nations, and many others.” RMP has assured that it has “complied with requirements in securing funds for their projects, including audits.” Its beneficiaries, it added, are those living in hard-to-reach areas, mostly peasants, indigenous peoples, and other rural poor, and that the “demonization” unleashed on it by government has “negatively affected various ministries in sustainable agriculture, rural schools, disaster risk reduction, climate change mitigation, health services, defense of human rights, and organic farming.”

This is a list, it must be noted, that contains work that is vested on government and government officials to fulfill, and yet for some reason the work remains unfilled, underfunded, sloppily implemented, or ignored completely. It seems that the biggest crime charged against the Rural Missionaries is that of stepping into the breach, shaming our negligent and paranoid officials.

As for Cardinal Tagle, is he aware of this long-standing harassment of church personnel, and what does he, from his perch as the third-highest ranking official in the Vatican, intend to do about it?