Books as enemy of the state? | Inquirer Opinion

Books as enemy of the state? 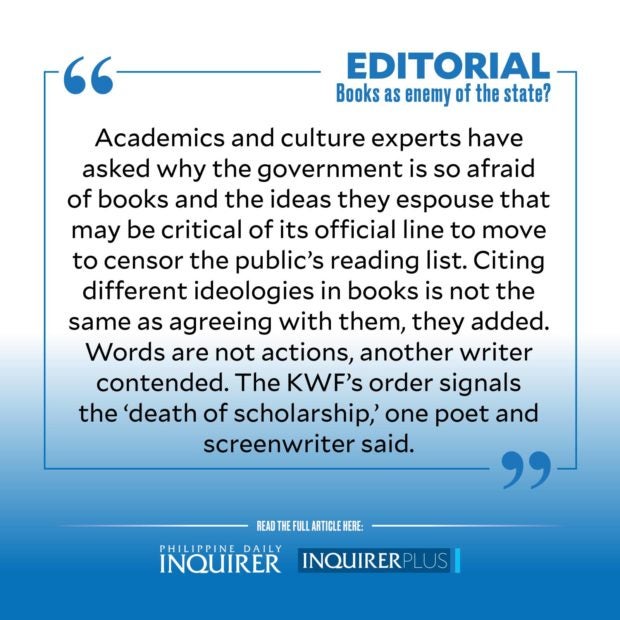 For the third time in the last six months, books have been the target of Red-tagging by certain peripheral government agencies.

The latest is the move last week by the Komisyon sa Wikang Filipino (KWF) stopping the publication of three books and the distribution of two more for allegedly being “subversive” and for promoting “antigovernment ideologies.”

In March, the National Task Force to End Local Communist Armed Conflict (NTF-Elcac) was blamed for the spray-painting of anticommunist slogans at Solidaridad and Popular bookstores. In May, it was the turn of Adarna House, whose bundle of children’s books on martial law was accused by the National Intelligence Coordinating Agency of trying to “subtly radicalize the Filipino children against our government.” Last year, several reading materials were removed from the libraries of state universities—Kalinga State University, Isabela State University, and Aklan State University—for allegedly having references to communism and socialism.

Academics and culture experts have asked why the government is so afraid of books and the ideas they espouse that may be critical of its official line to move to censor the public’s reading list. Citing different ideologies in books is not the same as agreeing with them, they added. Words are not actions, another writer contended. The KWF’s order signals the “death of scholarship,” one poet and screenwriter said.

Claiming that the books contain “political, subversive, and creative literary works with subliminal ideologies that encourage people to fight the government,” the KWF ordered one of its units to cease the publication of “Tawid-diwa sa Pananagisag ni Bienvenido Lumbera: Ang Bayan, ang Manunulat, at ang Magasing Sagisag sa Imahinatibong Yugto ng Batas Militar 1975-1979” by Dexter Cayanes, and “Labas: Mga Palabas sa Labas ng Sentro” by Reuel Aguila. It also directed its officers to refrain from distributing “Teatro Politikal Dos” by Malou Jacob, “Kalatas: Mga Kuwentong Bayan at Kuwentong Buhay” by Rommel Rodriguez, and “May Hadlang ang Umaga” by Don Pagusara, all of which the agency launched in April.

The order was issued on the same day that former NTF-Elcac spokesperson Lorraine Badoy criticized the literary works over a program aired on the Sonshine Media Network International channel, owned by pastor Apollo Quiboloy, one of FBI’s most wanted for alleged human trafficking.

But the KWF has “no power whatsoever to ban and censor written works in Filipino,” protested Albay Rep. Edcel Lagman, describing the agency’s “unlawful” memorandum order as an attempt at “thought control” and a “liquidation of the freedom of expression.” He described the KWF move as “an unwarranted sanction by an unauthorized agency without trial and due process.’” Lagman also noted that the memo was signed by only two out of 11 commissioners and “does not have the conformity of the requisite majority.”

KWF chair Arthur Casanova, who did not sign the order, similarly noted that the agency “may already be stepping on the boundaries of freedom of expression and academic freedom.” The five books, he said, had passed the commission’s review process, and even “received the imprimatur” of two commissioners, Carmelita Abdurahman and Benjamin Mendillo Jr., the signatories in the controversial order.

In a TV interview, Mendillo insisted that the KWF “respects, encourages, and protects the constitutional right to freedom of expression of every Filipino” but “must conform to laws, rules, and regulations.” The order cites Section 9 of Republic Act No. 11479, or the Anti-Terrorism Act of 2020, which penalizes those who incite others to commit terrorism “by means of speeches, proclamations, writings, emblems, [and so on]” to justify its move.

Such reasoning has raised pertinent questions that the KWF has yet to answer: Wouldn’t such rigid interpretation of the law have a chilling effect on open discourse and a flourishing market of ideas, surely a necessary counterbalance to the narrow and revisionist narratives being spread on social media? Is there proof at all to the KWF claim?

Even more worrying, however, is the potential risk that could ensue from such unsupported claims, as seen in the arrests and deaths of several activists, lawyers, and rights workers previously Red-tagged by the NTF-Elcac. “We believe it is a form of terrorism when a (group of) people can dictate what books should be written and how they should be written,” the authors of the banned books said.

Nothing illustrates how dangerous such mislabeling and hasty judgment can be than the recent severe stabbing of novelist Salman Rushdie in New York by a man whose social media account shows him to be a rabid supporter of the fatwa imposed on the writer by Iran’s Ayatollah Khomeini in 1989. Religious fundamentalists sentenced Rushdie to death for his “The Satanic Verses” novel that Khomeini said “insult(s) the sacred beliefs of Muslims.”

It’s a grim scenario that the withdrawal of KWF’s toxic edict and Congress’ proposed probe of it can hopefully prevent while also stemming this staggering wave of Red-tagging, censorship, and latent form of book-burning that stifles freedom of expression and critical thinking.