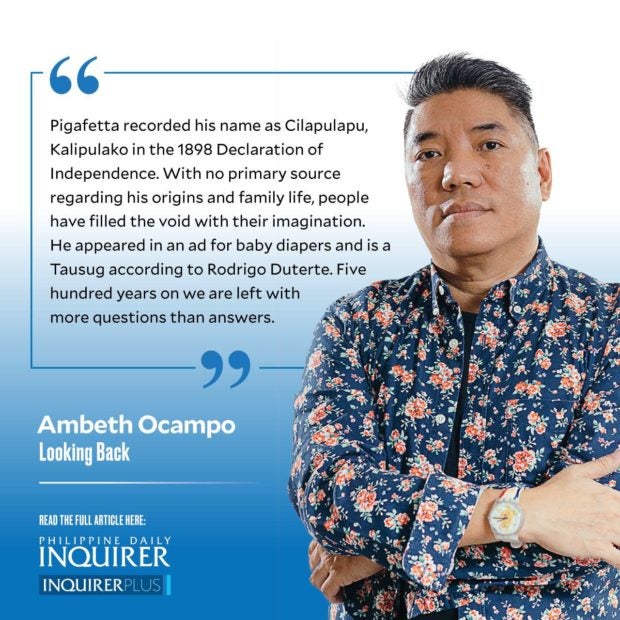 On my recent trip to Cebu, I visited the old jail converted into Museo Sugbo. Former prison cells now contain an informative exhibit on the history of the province from prehistoric times to the present. Local history, or should we say local “histories,” are given importance here, not just for local pride but as loose threads that are woven to form our national narrative. I believe that elementary schoolchildren begin history by learning about their surroundings and landmarks. They should learn about historical figures from their community, city, province, and region before they are taught about national heroes and national history. As a model, Museo Sugbo greets visitors with Cebu history before sending them off to exhibits from the National Historical Commission and the National Archives.

As a postscript to the 500th anniversary of the Magellan Expedition, I visited the Basilica of the Santo Niño, only to be disappointed that, unlike previous visits, photography is not allowed anymore. Prohibiting photos and selfies near the Santo Niño keeps the long line of pilgrims, tourists, and the curious moving. Billed as the “oldest Christian image in the Philippines,” the Santo Niño is believed to be the exact same image presented by Magellan as a baptismal present to the Queen of Cebu in 1521. Rereading Antonio Pigafetta’s account of the baptism in Cebu confused me:

“… [W]e showed her a lady carved in wood, holding her child (which was very well made) and a cross. The sight of this gave her a greater wish to be a Christian, and asking for baptism she was baptized and named Joanna, like the emperor’s mother [known in history as Juana la Loca or Joanna the Mad] … she begged us to give her that wooden image, to put in place of her idols which we did. And then she went away.”

The above text is translated from a French manuscript copy preserved in Yale University and states that the image was of a Virgin holding the Christ Child, not the Santo Niño by itself. An older Italian manuscript said to be the closest to Pigafetta’s original states what we want to believe:

“A great number of women accompanied her who were all naked and barefoot, except that they had a small covering of palm-tree cloth before their privies, and a small scarf upon the head, and all with hair flowing free. The queen, having made the due reverence to the altar, seated herself on a silk embroidered cushion. Before the commencement of the mass, the captain sprayed her and some of her women with musk rosewater, at which they very were much delighted. The captain, knowing that the queen was very much pleased with the child Jesus, gave it to her, telling her to keep it in place of her idols, for it was in memory of the son of God. Thanking him heartily she accepted it.”

To complicate matters, aside from the Santo Niño image, another relic dating back to the Magellan expedition is a wooden image of the “Ecce Homo” enshrined in the right side altar of the Basilica. Ecce Homo was allegedly found in a coffin with the incorrupt corpse of a man believed to be Rajah Humabon, who was christened Carlos. My visit left me with more questions than answers. Manuscript sources mention an image of the Virgin holding the Christ Child, a cross, and a Christ Child by itself. Which Pigafetta manuscript are we to believe?

On this trip, I also visited Mactan, knowing that preserved in the Museo Oriental in Valladolid, Spain is a historical marker of wood dated 1843 and installed by the Augustinian Fray Benito Perez who located what is accepted today as the site of the Battle of Mactan. In 1866, an obelisk of coral stone was erected on the site as a memorial to Magellan and the Spanish glories, a memorial destroyed in December 2021 by Typhoon “Odette.” Is this spot really where Lapulapu defeated Magellan?

The Lapulapu monument should be the icon for all gyms in the province. Lapulapu is always depicted as a young, handsome, gym-toned man with shoulder-length hair and six-pack abs. One unsubstantiated Portuguese source described him as an “old man.” Pigafetta recorded his name as Cilapulapu, Kalipulako in the 1898 Declaration of Independence. With no primary source regarding his origins and family life, people have filled the void with their imagination. He appeared in an ad for baby diapers and is a Tausug according to Rodrigo Duterte. Five hundred years on, we are left with more questions than answers.