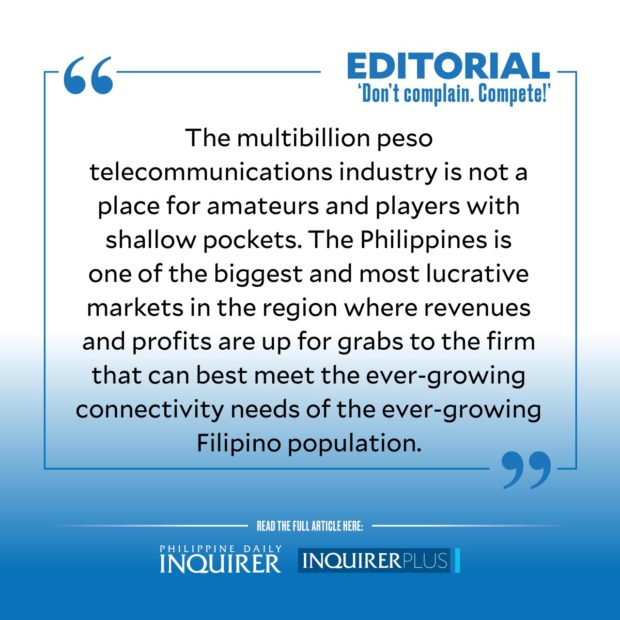 Reading last week’s local business news, one could be forgiven for thinking that the Philippine telecommunications industry is back to where it was in the late 1990s and early 2000s, where a giant company is preventing a smaller player from providing long-suffering Filipinos with better services at cheaper rates.

In particular, we’re talking about the complaint lodged by Dito Telecommunity—the so-called third telco, owned by Davao-based businessman Dennis Uy—with regulators, alleging that Globe Telecom and PLDT are trying to squeeze it out of the market by preventing its clients from interconnecting with the bigger rival networks.

Specifically, Dito says that as little as 20 or 30 out of 100 calls made by its subscribers get through to Globe and Smart numbers, representing a failure rate of 80 percent. This is way above the 1-percent failure rate allowed by regulators.

Globe immediately hit back, saying it refuses to grant Dito more interconnection slots unless the upstart telco addresses the high volume of fraudulent calls (posing as domestic calls but are really international calls) it tries to route via Globe’s network.

For those with long memories, the issue was similar to the complaint aired by Globe Telecom some two decades ago against PLDT, then the dominant player, and its subsidiary, Smart Communications.

Simply put, Globe users trying to call Smart mobile phone subscribers and PLDT landlines could not get through due to the very limited slots allocated by the industry giant for the up-and-coming Ayala-controlled firm.

Indeed, if a user could not call or send text messages to numbers of a bigger rival network, what’s the point of staying with one’s service provider? Why not just shift to the bigger telco where one could make a connection on the first dialing attempt or successfully send an SMS on the first try?

There’s one key difference in the current spat though. This is not the 2000s, where trying to access telecommunication services was, more often than not, an exercise in futility.This is 2022 where, according to the global GSM Association, the total number of mobile connections in the Philippines is equivalent to 140 percent of the country’s 110-million population (meaning, on the average, many Filipinos have more than one connected mobile devices).This is the same market which, in 2021, was said to have a total mobile internet penetration of 72 percent—almost 80 million Filipinos—and this was expected to rise to 77 percent by 2025.

And thanks to the aggressive marketing efforts of both telco giants (spurred by rival internet network service providers), average internet download speeds have risen sharply over the last few years, while costs have come down substantially. Which is the kind of telco war customers need—a fierce competition for excellent service.

Admittedly, much of these gains happened during the past administration of President Duterte, who made internet connectivity one of his key campaign promises. But these improvements were put in place unilaterally by the telco giants due to Duterte’s threats. The improved internet and mobile phone services were already in place long before Dito even got off the drawing board.

The multibillion peso telecommunications industry is not a place for amateurs and players with shallow pockets. The Philippines is one of the biggest and most lucrative markets in the region where revenues and profits are up for grabs to the firm that can best meet the ever-growing connectivity needs of the ever-growing Filipino population.

Any competent competitor can see this and find cracks where they can penetrate the market and satisfy unserved or underserved segments of the market.

Just look at Converge ICT Solutions Inc., whose visionary founders and owners—Dennis Anthony and his wife Grace Uy (no relation to the Uy of Davao)—were able to converge a small cable TV service provider in Angeles City into the country’s only pure fiber optic internet network, surpassing the service speeds of PLDT and Globe at lower price points.

Simple Pampanga-based entrepreneurs, this Uy couple is now worth billions of dollars and is a constant fixture of the annual list of the world’s richest by Forbes magazine. Most importantly, their clients are, for the most, happy with the service their firm provides at the prices they are offered.

In other words, it can be done. Competition is present. And beating the giants at their own game is possible (even without handholding from a friendly administration, even without a rent-seeking setup) if a company really knows its market and its leaders are truly competent.

So to Dito Telecommunity—and every other firm that has grown accustomed to having advantages served to it on a silver platter these past six years—it would be wise to remember the words of Globe and Smart to each other two decades ago, whenever one would go whining to the regulator against the other’s cutthroat market moves: “Don’t complain. Compete!”