Back to reality | Inquirer Opinion 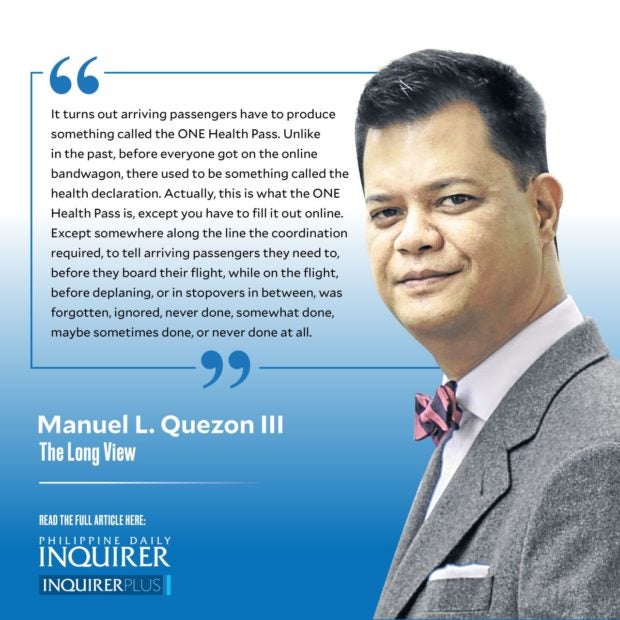 Do you remember when arriving in the old Naia in the late 1990s was accompanied by a pangkat kawayan or bandurria-style combo that belted out folk songs, while people pretending to be paparazzi faked taking pictures with a lot of “flashbulbing” going on? It was a kenkoy idea by someone in the Department of Tourism to make arriving tourists and balikbayans feel swell, but, boy, was it corny fun. As we were deplaning from an EVA Air flight yesterday, I was actually reminiscing about this when reality collided with the past.

As we exited the gate, a couple of lines formed, leaving you no option but to be puzzled by a Bureau of Quarantine (BOQ) video on monkeypox. I say puzzled because, well, the only way to describe the way it’s made is to invite you to go online, go to YouTube, and do one of two searches: “Total Eclipse of the Heart Literal Video Version” or “Men Without Hats Literal Video HD” and you’ll get some idea of the BOQ’s approach to the Monkeypox Video. You have to see it to believe it.

It turns out arriving passengers have to produce something called the One Health Pass. Unlike in the past, before everyone got on the online bandwagon, there used to be something called the health declaration. Actually, this is what the One Health Pass is, except you have to fill it out online. Except somewhere along the line, the coordination required to tell arriving passengers they need to, before they board their flight, while on the flight, before deplaning, or in stopovers in between, was forgotten, ignored, never done, somewhat done, maybe sometimes done, or never done at all: there were many opinions expressed on this as morning turned into afternoon.

The short version is that anyone lacking the One Health Pass is (very nicely, actually) told to go to a mysterious place called Gate 16, where Philippine Coast Guard troops in urban camouflage engage in strategically distributing people in lines only they understand, and an extremely overworked contingent of BOQ personnel, assisted by a couple of Coast Guard persons, process the people who are sent to that gate. There were confused and frightened foreigners, irate old-timers coming home, anxious (because of connecting flights) balikbayans, with everyone having a story to tell of how they were experiencing maximum inconvenience due to a minimum of government information.

As is usually the case, the frontliners from both BOQ and Coast Guard had to bear the brunt of public confusion and exasperation, and they did so, more often than not, not just with patience but genuine sympathy and a commendable willingness to go above and beyond (one lady from BOQ showed up, midway through our two-hour experience, to patiently try to help an old-timer register; another already very tired BOQ person manning a desk eventually helped us register, too).

But this is where, as one passenger told another, sooner or later someone always ends up saying, “Well, welcome to the Philippines, where no one expects efficiency.” The purpose of the pass is to replace the old form with an online one. As I’ve mentioned, a very good case can be made by me and hundreds of passengers that there is little to no coordination between the authorities and the airlines to inform the public of this requirement (especially considering more and more airlines now have Wi-Fi on board).

The second thing is, it’s a bit of the luck of the draw whether you will get the third degree or a more helpful approach: by this I mean, that the third degree starts with “do you have a test result?” which sets off alarm bells because most people have already heard the government doesn’t require one anymore for departure or entry; when the helpful approach actually suggests, “are you vaccinated and boosted?” which is the meat of the matter, because only if you’re not does a COVID test enter the picture.

Which brings me to the third thing. A tremendous amount of energy was spent, if you recall, sorting out the lack of a standardized vaccination card, by asking people to go to BOQ to get that WHO Yellow Card. That process is familiar to most people who have traveled or planned to. Here’s the clincher. The One Health Pass accepts information from the WHO Card, which you can photograph to prove you’ve been vaccinated and boosted, which then brings up two things: why can’t your Yellow Card information, which you had to submit online, too, go directly to the One Health Pass, or better yet, why can’t the Yellow Card suffice in lieu of that pass?

The point of all these data-gathering exercises, after all, is simply to determine if you are vaccinated or boosted. And besides: as one elderly gentleman grumbled, “I have registered for that thing three times for three trips, and each trip here I am back in Gate 16!” As we were leaving, I asked the helpful BOQ fellow who helped us: “So I keep this Health Pass? For my next trip?”