An officer and a gentle man | Inquirer Opinion

An officer and a gentle man 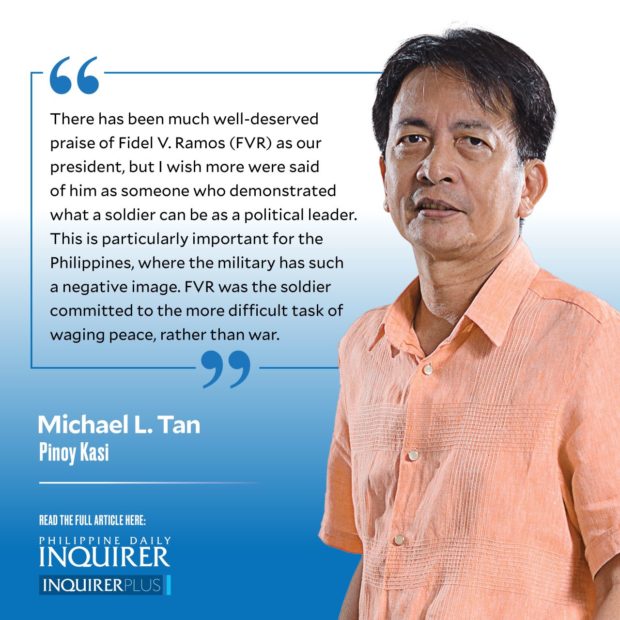 There has been much well-deserved praise of Fidel V. Ramos (FVR) as our president, but I wish more were said of him as someone who demonstrated what a soldier can be as a political leader. This is particularly important for the Philippines, where the military has such a negative image.

Yet, here was FVR, who rose through the ranks of the military and even served Marcos and the martial law regime, but I do not remember him as one of the military butchers of that dark period in our history. When the turn of history called for him, in 1986, to choose between the dictatorship desperately clinging to power and the side of democracy, he called on government troops not to fire on the hundreds of thousands of people who showed up in Edsa to put an end to the dictatorship. That call was crucial in turning the tide.

Jose Almonte, another military person who later became FVR’s national security adviser, recently recalled how FVR rejected opportunities to grab power, as the military has done in many countries across history. The first opportunity came during the power vacuum after Marcos finally fled the Philippines. FVR refused to take over as president, which would have meant pushing aside Cory Aquino.

Almonte quotes FVR as having said that he did not want to be “part of a decision or action that will make this nation a banana republic ruled by the barrel of a gun.”

A second chance at a power grab came in 1989, after several coups had weakened the Cory Aquino administration. The 1989 coup was particularly forceful, and Cory’s own Cabinet members had suggested that FVR, who was Cory’s defense secretary, should take over. Again he refused, saying he did not want “to preside over the dissolution of the republic.”

In due time, FVR ran for, and won, the presidency.

In the 20th century, in different parts of the world, we have seen the rise of the professional soldier sent to military academies to learn not just about soldiering but of history and the liberal arts, and the sciences. FVR went to the US Military Academy (better known as West Point) and finished a bachelor’s degree in military engineering. He went on to get a master’s degree in civil engineering, a master’s degree in national security administration, and an MBA.

You can see the imprint of that kind of education on his leadership. The recollections of his former Cabinet members paint a picture of a no-nonsense, firm administrator, one which probably came from a blend of military training as well as the MBA. Ateneo’s MBA, we should remember, is based on an Ignatian model, after the founder of the Jesuits, St. Ignatius, who was also a soldier.

FVR was an avid student of history, which would explain his resistance to power grabs. Almonte recalls FVR’s respect for the nation’s heroes who put up our Republic and saw his role, as president, as being one of defending that Republic.

FVR visited UP Diliman many times, to attend seminars, not necessarily as a speaker. That made him different from other military men who avoided UP Diliman for fear of rallies. As a UP administrator, I never had to worry if it was FVR, who was comfortable visiting us, and we with him, seeing him more as a father figure, a gentle one at that.

An officer he was, and a gentle man.

It was during FVR’s presidency that the government and the National Democratic Front signed The Hague Joint Declaration, initiating peace talks. FVR articulated “Six Paths to Peace,” which included the pursuit of reforms to deal with root causes of insurgency; consensus-building and empowerment for peace; peace talks with rebels aimed at a final negotiated settlement with neither dishonor nor surrender for any of the parties; programs for reconciliation, reintegration, and rehabilitation; protection of civilian and de-escalation of conflict, addressing concerns from continuing armed hostilities, including protection of human rights and, finally, building and nurturing a climate conducive to peace.

FVR was the soldier committed to the more difficult task of waging peace, rather than war.