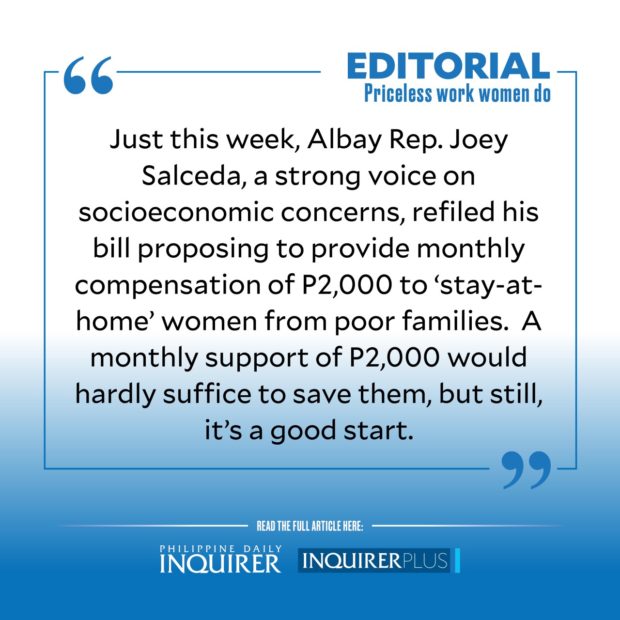 The Philippines is still a long way off from, say, Venezuela where, in 2007, a law was passed giving so-called stay-at-home housewives compensation that recognizes “their work at home as a valuable economic activity.”

Other countries like Belgium, Denmark, Lithuania, Norway, and Slovenia provide free childcare support for children under three years old. Sweden, meanwhile, ranks first among child advocates for its generous social policy, including childcare support. Parents are entitled to 480 days (more than a year!) of paid parental leave, 60 of which are reserved for the father.

And yet, even partly subsidized or limited childcare support remains a distant dream, or perhaps even an unreachable fantasy, for parents in most parts of the world. Included in this lineup is the Philippines, where formal state recognition of the role played by “stay-at-home” caregivers, especially mothers, has yet to be granted.

FEATURED STORIES
OPINION
Education and the state of the Filipino family
OPINION
Go for the ‘big circle’!
OPINION
Kulturkampf: ‘Katips’ vs ‘Maid in Malacañang’

Well, maybe not for long.

Just this week, Albay Rep. Joey Salceda, a strong voice on socioeconomic concerns, refiled his bill proposing to provide monthly compensation of P2,000 to “stay-at-home” women from poor families. In the bill, Salceda declares that the work done by housewives should be seen as “social reproductive work,” nurturing the future and current workforce.

“Some studies show that if we quantify the work of stay-at-home women, it approximates the work of kasambahay (domestic workers),” says the congressman. “Housewives also deserve to get paid at least what a kasambahay earns,” he added.

Well, the equation doesn’t quite work as neatly. International studies have shown that women are the primary caretakers of children and elders in every country of the world. The same studies demonstrate “that when the economy and political organization of a society changes, women take the lead in helping the family adjust to new realities and challenges.”

A report conducted some years back by Oxfam and the Institute for Women’s Policy Research estimates the monetary value of unpaid care work at nearly $11 trillion a year, an amount that few countries can afford to pay its unpaid women doing domestic work. Locally, says the International Labor Organization (ILO), women provide 84 percent of the total “household time allocated to childcare.” This, says ILO, “constrains (a woman’s) participation in paid work.”

And yet, a deeper injustice lurks below this surface inequality. Women and girls account for around 60 percent of the world’s chronically hungry, notes the World Food Programme. “This is despite the fact that women worldwide, according to the Food and Agriculture Organization (FAO), produce more than half of our grown food.”

Hunger among those primarily responsible for nurturing our nation has many causes, observes the FAO. Among these are “unequal access to education, employment, resources and social services,” according to FAO. It also observed that some societies “also consider women weak, deeming them unfit for certain tasks,” and perhaps unqualified for an equal share of food at the table.

Even as legislators and policymakers continue to debate the wisdom and practicality of paying poor mothers forced to stay at home and do unpaid domestic work, more and more women and girls are going hungry. The specter of hunger has grown ever larger as the economic blows rendered by the COVID-19 pandemic and global food crisis rain down on Filipino families.

In a report in the GMA-7 news show “24 Oras,” reporter Maki Pulido looked into the situation of Nichelle Arig, who budgets around P100 of her husband’s salary of P380 a day for food. Arig confesses that P100 is about enough for one-and-a-half kilos of rice and some vegetables, and when her children are especially hungry, she contents herself with coffee. “Of course, the children must eat first,” she asserted.

A survey conducted by the Food and Nutrition Research Institute in 2020 found that “at least 62.1 percent of households polled have experienced food insecurity or lack of food.” Around 21.1 percent of these families reported cutting down on the food intake of adults, usually the mothers, just so their children would have enough to eat.

What happens to these mothers over the long term? And what will their children have to eat when the women are too tired or run down to care for them? A monthly support of P2,000 would hardly suffice to save them, but still, it’s a good start.