‘Friend to all, enemy to none’ | Inquirer Opinion
Close
menu
search

‘Friend to all, enemy to none’ 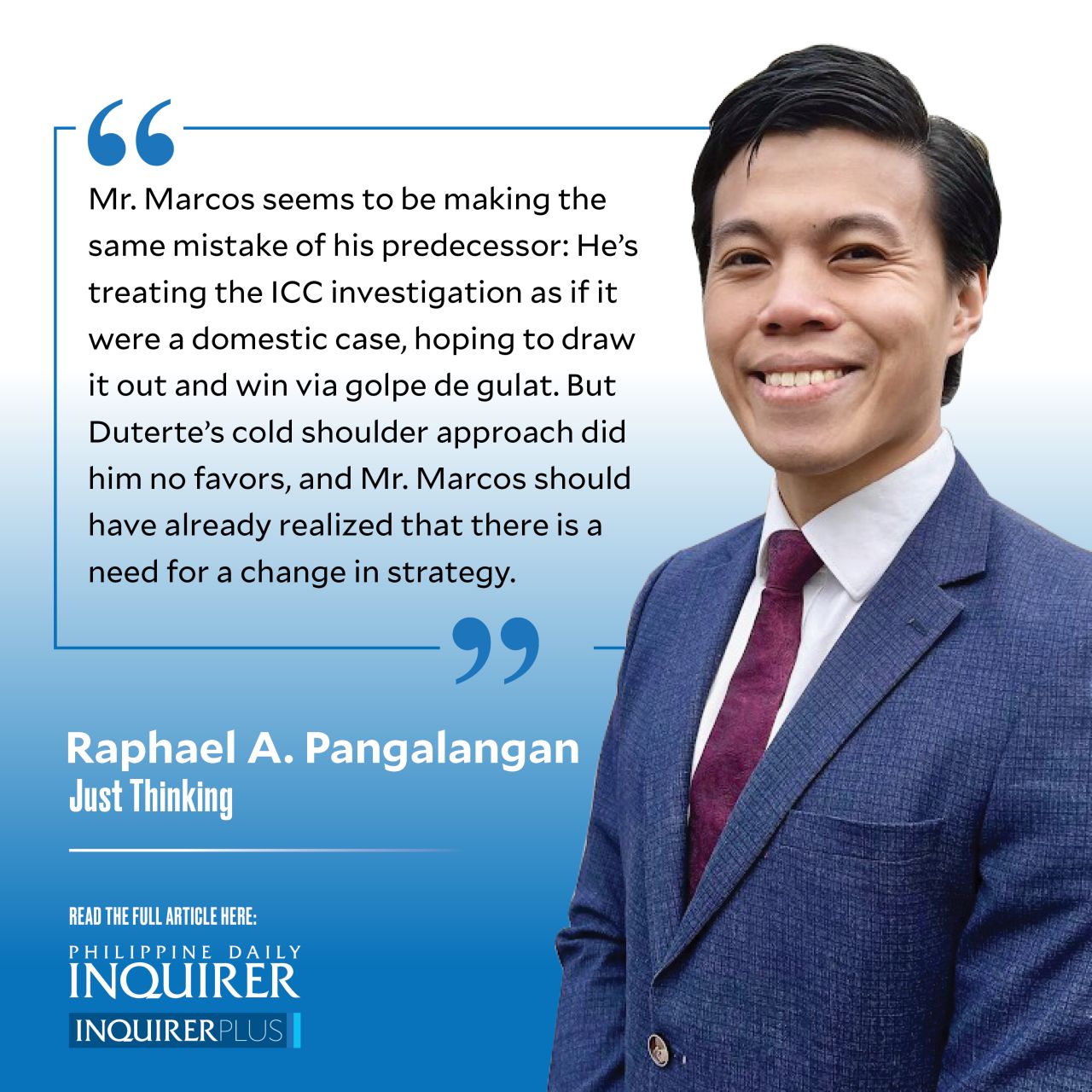 President Marcos Jr. had strong words for the country’s place in the international community. Halfway through his State of the Nation Address, he professed that “the Philippines shall continue to be a friend to all, an enemy to none.”

Apparently, that claim comes with a giant asterisk that reads: “*Except to the International Criminal Court (ICC) system.”

Last Monday, Mr. Marcos announced that the Philippines will not be rejoining the Rome Statute. Honestly, this was just about as surprising as the tune of Sinatra’s “My Way” in your local karaoke bar. We all knew it was coming. It was just a matter of time. And though I may disagree with the administration’s decision, we have to face the music: As a matter of sovereign discretion, no state is ever bound to ratify—let alone rejoin—an international treaty.

But what does come as a surprise are the misconceptions that have been spewed along the way. On one hand, some have been quick to condemn Mr. Marcos’ decision as a foretelling of future obstructions, as if Philippine cooperation with the ICC is hinged on our returning to state party status. On the other hand, the Duterte camp rejects the chance of cooperation because Philippine authorities are allegedly “able and willing” to investigate or prosecute the extrajudicial killings (EJKs) themselves.

These views are dichotomies we ought to avoid drawing.

To the first: Though the Philippines remains a nonmember to the Rome Statute, that is not to say it is no longer obligated to cooperate with the ICC. Indeed, when Duterte unilaterally withdrew from the Rome Statute, he invoked Article 127 thereof, which states that a “withdrawal shall not affect any cooperation with the Court in connection with criminal investigations and proceedings[.]”

So let us be clear: Failing to rejoin the Rome Statute does not mean Mr. Marcos is now off the hook. The duty to cooperate continues. And as will be shown, indeed he should.

To the second: Duterte’s counsels claim that the ICC cannot exercise jurisdiction because the Philippines has functioning courts that are “able and willing.” This is a gross misinterpretation of Article 17(1) of the Rome Statute, which provides for a two-step process. As already clarified by the ICC in Prosecutor v. Katanga, and as meticulously diagrammed by JM Batuhan and Anton Sison in their user-friendly ICC primer published with the Philippine Law Journal, what we find in Article 17 is an interplay of two types of rules: the general rule (i.e. that a case is inadmissible where it is being investigated or prosecuted domestically) and the exception to the rule (i.e. unless the state is unwilling or unable to do so genuinely).

Notably, the words “able and willing” never come out in the Statute’s provisions. Yet now, Duterte’s counsels put the cart before the horse; invoking a phantom exception of “able and willing” to evade the ICC’s jurisdiction. And all the while, failing to show that Philippine authorities are, indeed, investigating or prosecuting the EJKs in the drug war in the first place.

But perhaps what is even more perplexing about the Duterte camp’s flawed interpretation of Article 17 is how it fails the very test it invokes. Having functioning courts may indeed evidence an ability to prosecute, fine, but a willingness to do so is another thing entirely. As the saying goes: The proof is in the pudding.

This brings us back nicely to why Mr. Marcos should, indeed, cooperate with the ICC’s investigations.

Mr. Marcos seems to be making the same mistake of his predecessor: He’s treating the ICC investigation as if it were a domestic case, hoping to draw it out and win via golpe de gulat. But Duterte’s cold shoulder approach did him no favors, and Mr. Marcos should have already realized that there is a need for a change in strategy.

Perhaps, he could take a page from the Venezuelan playbook. In November 2021, the Office of the Prosecutor (OTP) opened an investigation into the situation in Venezuela. Like the Philippines, the Maduro administration disagreed with the OTP’s findings. Unlike the Philippines, rather than crying foul, the Maduro administration agreed to cooperate with the OTP through a memorandum of understanding (MOU) to promote cooperation and complementarity.

If Mr. Marcos truly believes that the Philippines is “able and willing,” then he would be much better off laying his cards on the table than keeping them close to his chest. By entering into a similar MOU, Mr. Marcos may very well take control of the situation and face the OTP investigation, one way or another, on his terms.

Read Next
Thirteen years of the magna carta of women
EDITORS' PICK
A laptop that maximizes your WiFi so you can maximize your productivity
House energy committee chair Arroyo bats for cheap electricity
Powered by style, innovation and passion
House starts inquiry into sugar import mess
Pimentel: Gov’t buyers knew of cheaper laptops but still got expensive ones
‘Opportunity’: PH senior population on the rise
MOST READ
U.S. actor Anne Heche is taken off life support 9 days after car crash and dies
Imee Marcos bares illegal importation of white onions
Pimentel: PS-DBM knew of cheaper laptops but still got expensive ones
John Arcilla cries foul over death threats for his ‘Ang Probinsyano’ role: ‘Serye lang, walang personalan’
Don't miss out on the latest news and information.