The truth in the music | Inquirer Opinion
Close
menu
search

The truth in the music 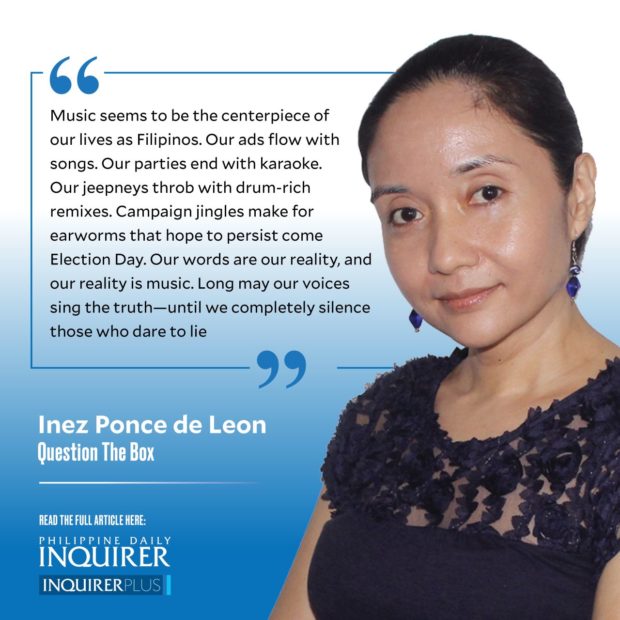 The musical “Katips” won big on FAMAS night, taking home acting, directing, and technical awards, all before capping the evening with the Best Picture trophy. “Katips” is no reactionary newcomer: It won the 2016 Aliw Award for Best Musical Performance, and its film counterpart was screened in late 2021.

“Katips” tells the story of student activists who braved the evil of martial law so that we might truly say: NEVER AGAIN. It is set to be released widely in theaters today.

But why a musical, some might ask? Why dilute the gravity of our recent history with song and dance numbers, when that dark time was filled with blood, pain, and tears? And, of course, the oft-repeated line by those who despise musicals: musicals don’t feel real; nobody bursts into spontaneous singing on the street.

I’m a big fan of musicals, and they are not to be confused with variety shows. To think of musicals as mere spectacle is to underestimate the power of music itself.

Music seems to be the centerpiece of our lives as Filipinos. Our ads flow with songs. Our parties end with karaoke. Our jeepneys throb with drum-rich remixes. Campaign jingles make for earworms that hope to persist come Election Day. The resonant bass of “Ang presidente, Leni Robredo; bise presidente, Kiko Pangilinan” created the heartbeat of the Pink Rallies.

Music, too, weaves into our language. Language is no mere accident of human articulation: It represents how we make sense of the world, how we define truth, what we believe is important, what we think is real.

Filipinos are often spoken of as having a “musical” accent, which might be due to our Latin origins. We are distinct from the Spanish with their staccato strung through with notes, the Portuguese with their meaty syllables grinding against each other like singing pebbles, or the Italians with their long vowels that trill across words before fading away.

Our language represents and duplicates what we see, hear, and sense. We have over 120 living languages in the country, each with its own cadence, each with words that speak so closely of the environment in which they were created.

Take, for instance, our words for light rain, or the English “drizzle.” The Filipino equivalent, ambon, sounds like large drops coming in on the heels of a thunderstorm. The Ilonggo talithi feels like sprightly spray scraping the pavement. The Cebuano taligsik sounds like water bouncing off grass.

Filipino sings the weather. The heavens open and the weight of water comes down—umuulan. A blade of energy and light slices through the skies, drawing jagged lines of air through the front of the teeth—kidlat. A dull boom of thunder follows, pushing a wall of sound to the roof of the mouth—kulog.

Our vocabulary is replete with words that paint the tableau of moments. The Filipino gunita, or memory, evokes a blushing sunset on a sleepy afternoon. It invites someone to look out across the horizon, to think of their day and how it fits into the weeks, months, and years that have been. The Ilonggo panumduman has its own sensory signature: It sounds like the low humming of birds flying home to their nests, into the deep blush of a meditative twilight.

The words that made up the songs of the Edsa revolution all play their own melody even without music. “Magkaisa” ends with an open mouth, as though we were in a protest rally, raising our fists and speaking out against tyranny and lies. “Handog ng Pilipino sa Mundo” has all the long vowel sounds that invite people to sing together, to add their harmony, to speak in one voice against the powers-that-be that attempt to drown them out.

Our language is no mere accident. Every word comes from a keen observation of our environment, and the music of our language represents the truth that the words speak.

A musical, then, might be the most apt medium to retell the history that was martial law. Not overblown shots of a torch-bearing mob, or a downright ridiculous scene of nuns playing mahjong. Only music, our language, our true collective memory.

Nobody breaks out into song? Oh, but we do, every day, whenever we open our mouths and choose words from the languages we speak.

Our words are our reality, and our reality is music. Long may our voices sing the truth—until we completely silence those who dare to lie.