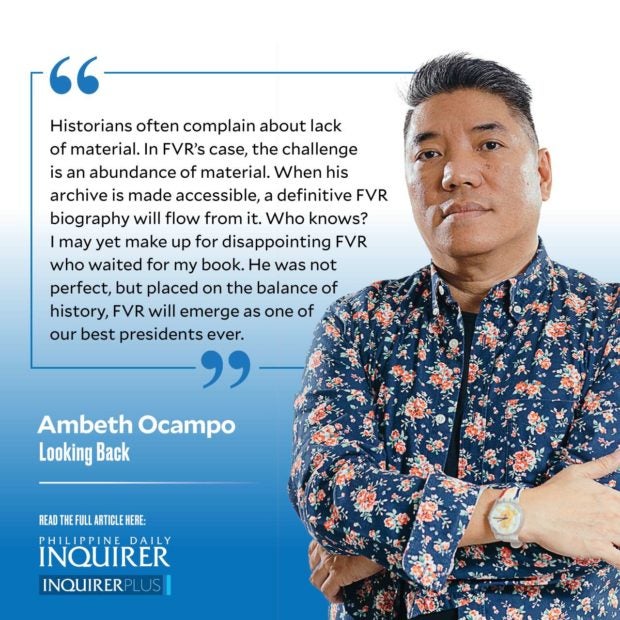 Fidel V. Ramos (1928-2022) passed on into history last Sunday. I received the sad news after Mass for the feast of Ignatius Loyola, patron saint of soldiers, and remembered Gen. Douglas MacArthur’s second most quoted line after “I shall return.” MacArthur concluded a 1951 speech before the US Congress with “Old soldiers never die, they just fade away.” FVR did the opposite: He reinvented himself from soldier to president and, after Malacañang, continued as senior statesman and salesman for the best of the Philippines.

As a martial law baby, I knew him as the head of the Philippine Constabulary and later as Edsa hero. I first met him in 1991 when he outlined his plans for the presidency before a Kapihan of newshens. FVR had no entertainment value then, but the presidency changed him, gave him the confidence to crack corny jokes, and wear eyeglass frames without lens.

Smarting over a column criticizing his plan to build a 100-story tower in Rizal Park to commemorate the Philippine centennial, he called me into his office and demonstrated the engineering and structural stability of the project using a water goblet, pens, and other objects on his table. I was relieved to get off with a light scolding, knowing what others less fortunate endured during martial law. On my way out of the room, he told me to prepare for a conference on “Rizal and the Asian Renaissance” in Kuala Lumpur, organized by then Deputy Prime Minister Anwar Ibrahim who learned of Rizal as a student in UP Diliman. Days later, someone called to confirm my attendance and persuaded me to give up my economy seat on the presidential flight in exchange for a business class seat on another flight. Woe to him, FVR turned up at a predeparture briefing and asked why I wasn’t on the manifest for his flight. When FVR requested I travel in Benedictine habit, I asked: “aren’t we visiting a Muslim country?” FVR replied: “the Philippines is composed of many peoples, languages, cultures, and religions.” End of conversation.

Unlike most chartered presidential flights, the FVR flight to KL was a commercial flight. Booked passengers were probably bumped off to accommodate the presidential party that included security and staff carrying computers and printers. Once airborne, FVR emerged from business class and walked to the end of the plane and back, shaking hands and posing for pictures. An American tried to catch the president’s attention, when I saw the helicopter brochures in his hand, I realized why I was persuaded to give up my seat on the presidential flight.

Years ago, FVR invited me to his Makati office and asked if I was up to writing his biography. Why me? I asked. “You are old enough to know the context,” he replied, “and young enough to speak to a new generation.” Looking at the stacks of books, papers, and DVDs on his desk reassured me that this would be a walk in the park. He allowed full access to himself, provided the interviews were conducted over a nine-hole round of golf, and full access to his papers. The Makati office had all the documentation post-presidency, everything else before July 1998 was in the basement of his Alabang home. I stalled on signing a contract because I was then teaching in Tokyo.

A visit to Alabang was arranged where Mrs. Ramos toured me around the house, bursting with memorabilia. She did not join me in the basement that contained unopened balikbayan boxes from his presidency, and in two rooms were steel cabinets heavy with documents. There was no finding guide to this trove of primary source documents, but I was told FVR knew where every piece of paper was filed. I decided to randomly open and peek at one folder to get a sense of the archive. I closed my eyes, walked around a bit, and pulled out a thick envelope. When I opened my eyes, the folder in my hands was marked: “Assassination attempts on Corazon Aquino.” I placed it back unopened, wondering what else lay in these filing cabinets, waiting to be discovered? Dumbfounded, I did not know where to start.

Historians often complain about the lack of material. In FVR’s case, the challenge is an abundance of material. When his archive is made accessible, a definitive FVR biography will flow from it. Who knows? I may yet make up for disappointing FVR who waited for my book. He was not perfect, but placed on the balance of history, FVR will emerge as one of our best presidents ever.