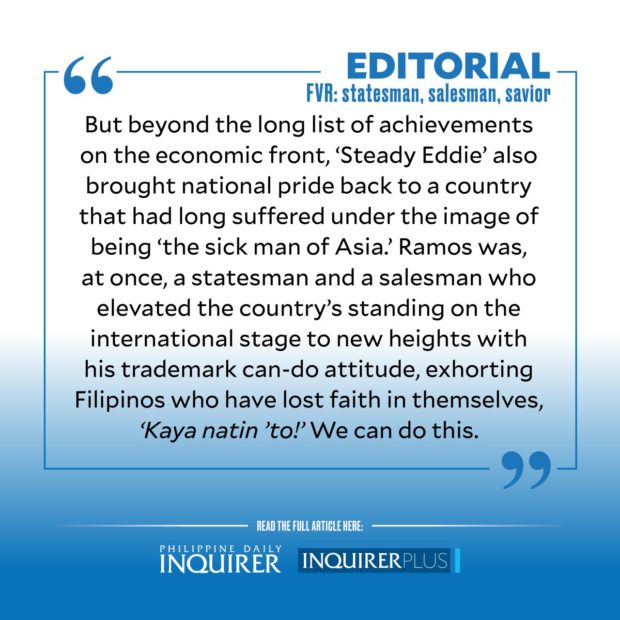 What would the Philippines be like without having Fidel Valdez Ramos as one of its most dedicated public servants?

In all likelihood, the country’s democracy would have eventually been restored. But who knows how much longer an ailing dictator would have held on to the reins of power—and by what means—had the then head of the national police not cast his lot with the plotters of a failed coup to form the nucleus of what is now known as the Edsa revolution.

And who knows if that fledgling democracy after the 1986 revolution would have survived or slid back into chaos had he not steadfastly stood by the side of his commander in chief as disgruntled elements of the military and the former dictatorship tried to take the reins of power by force no less than nine times.

Having survived those precarious years, President Ramos threw his hat into the political ring and won one of the tightest presidential elections with less than one-fourth of the vote among a wide field of seven rivals. From the start, it didn’t look promising.

But he proceeded on a mission to prove his critics wrong by assuming the role of problem-solver in chief for a country that had problems aplenty.

And to the country’s mountain of woes, President Ramos’ answer was a firm and unshaken belief in the power of economic liberalism.

He saw early on that the Philippines’ progress was being held back by the various business monopolies that were a relic of a bygone era when it was important to build “national champions” that could stand strong in uncertain economic times. Now, those champions were an impediment to growth, and President Ramos went about dismantling the biggest of them.

This included the telecommunications sector where he forced PLDT to open up to competition from smaller players to remedy a situation where it would take years, sometimes decades, for a subscriber to get a telephone line.

Who knows how much longer it would have taken for the Philippines to become one of the biggest telecommunications markets in the world had President Ramos not taken this problem by the horns?

And who knows how much Filipinos would still be paying for air travel today had he not broken up the monopoly of Philippine Airlines? By liberalizing the air travel industry, President Ramos made flying by airplane affordable to ordinary Filipinos where it was once the exclusive domain of the wealthy.

President Ramos was also a big believer in privatization as a powerful force for mobilizing capital and free enterprise. Under his leadership, the long-running water crisis in Metro Manila was solved with the privatization of the water utilities, leading to water finally being piped into communities that had long relied on expensive water delivery services.

And though the current generation may not know it, the very existence of Bonifacio Global City today is due to President Ramos’ decision to embark on a massive privatization program of sprawling military camps, including Clark and Subic, to maximize their potential.

But, perhaps, most importantly—especially for those who lived through the power crisis of the early 1990s—who knows how much longer Filipinos would have suffered daily 12-hour electricity outages, no thanks to a decrepit energy infrastructure that had been devoid of new investments for many years?

President Ramos made it his mission to boost the electrical power supply to the country, knowing that economic growth could not happen if factories and offices were idle due to the daily “brownouts.”

For sure, that power crisis would have eventually been solved without a President Ramos, but who knows how much longer it would have taken, and if the Philippines would have missed the global economic boom of the 1990s had he not entered into emergency supply contracts with local and foreign power generators.

But beyond the long list of achievements on the economic front, “Steady Eddie” also brought national pride back to a country that had long suffered under the image of being “the sick man of Asia.”

President Ramos was, at once, a statesman and salesman who elevated the country’s standing on the international stage to new heights with his trademark can-do attitude, exhorting Filipinos who have lost faith in themselves, “Kaya natin ’to!” We can do this.

The former soldier, military general, and war veteran was also a peacemaker who signed a peace agreement with the Moro National Liberation Front and held peace talks with communist rebels.

Indeed, it is difficult to imagine a more consequential Philippine president than Fidel Valdez Ramos who, in a lifetime of public service, helped restore democracy to a troubled country, return its economic vitality, and gave Filipinos back their national pride with his tireless cheerleading.

Thankfully for all of us, we won’t have to wonder “what if” or “who knows” because we know exactly about all the good he has done for this grateful nation.