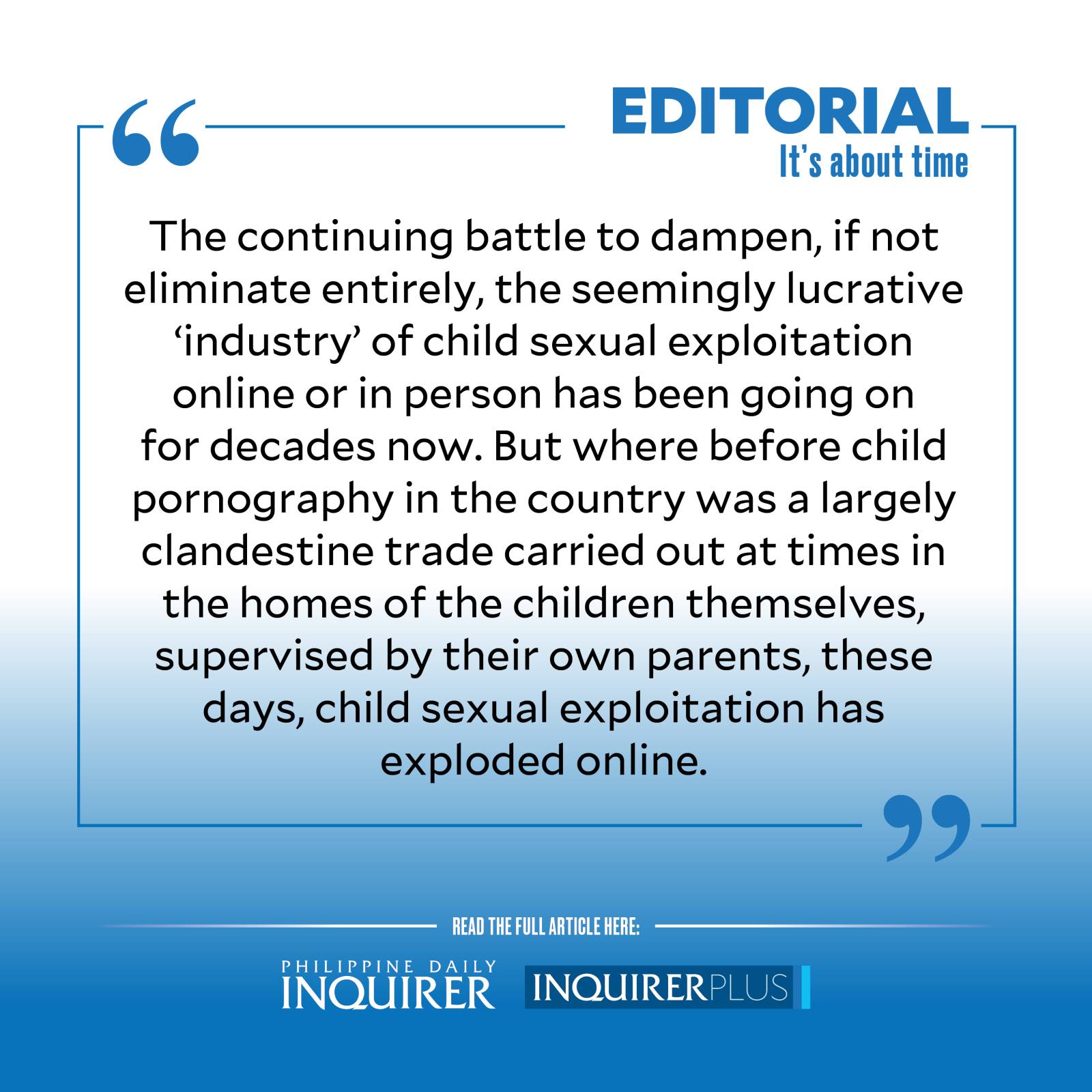 In the next few days, we will know whether President Marcos Jr. will sign into law the Anti-Online Sexual Abuse and Exploitation of Children (OSAEC) and Anti-Child Sexual Abuse or Exploitation Materials (CSAEM) Act. And if so, it could not have come sooner or at a more urgent time.

The pending bill, passed by both houses of Congress “just in the nick of time” before the Duterte administration exited, is aimed at strengthening current anti-child pornography laws in an environment where social media has allowed the proliferation of online channels and materials sexualizing children.

Sen. Risa Hontiveros, who authored the Senate version of the measure, said she was calling on the Chief Executive “to sign the Anti-OSAEC law now. Our children need the full power and protection of this measure.” It should be irrelevant, though it is entirely possible, that the chances of the measure being signed into law are at risk, given that Hontiveros is one of only two members of the opposition in the Senate. In her previous term, she also proved to be an outspoken legislator who did not hesitate to call out shenanigans in other branches of government, and exposed the trafficking of women in what has become known as the “pastillas” scam in the Bureau of Immigration. But should the rights and welfare of Filipino children be held hostage to the exigencies of partisan politics?

The continuing battle to dampen, if not eliminate entirely, the seemingly lucrative “industry” of child sexual exploitation online or in person has been going on for decades now. But where before child pornography in the country was a largely clandestine trade carried out at times in the homes of the children themselves, supervised by their own parents, these days, child sexual exploitation has exploded online. Hontiveros cites data from the Department of Justice that OSAEC cases in the country rose by a scandalous 264.6 percent at the height of the imposition of enhanced community quarantine from March to May 2020 due to the COVID-19 pandemic.

A bit of good news is that in a meeting organized by Hontiveros and attended by other authors of the pending measure, the Philippine National Police, the National Bureau of Investigation, and representatives of the online platform Facebook Meta, the parties agreed “to combat online abuse and exploitation of children by immediately taking down exploitative contents, as well as preservation and transmittal to authorities of evidence.”

Commission on Human Rights executive director Jacqueline de Guia, who lauded the ratification of the measure by the Senate and the House, declared that the proposed law would “address the pressing issues surrounding the increasing number of cases involving children.”

De Guia added that once enacted into law, the pending measure “will strengthen protection for children by requiring internet intermediaries and other internet or payment service providers to take down or remove websites that stream illegal content of abuse of minors.”

To illustrate the execrable lengths online predators have gone to capture views and rake in subscription fees, Hontiveros shared screenshots of a YouTube channel that has over 252,000 subscribers. The channel aired videos, for example, that purported to “teach” users how to convince a young girl to consent to unwanted advances; or how an adult could succeed in having sex with a child.

Equally alarming is the growing preference of users to view the sexual exploitation of younger children. The youngest recorded, the senator said, was a two-month-old baby.

Other provisions included in the proposed law would create the “specific offense” of OSAEC with matching penalties imposed. It also increases the duties of the private sector, with emphasis on electronic service providers, internet intermediaries, and financial intermediaries. The last would block and preserve exploitative materials found on the platforms, and cooperation with law enforcement agents.

To institutionalize the policy seeking to curb OSAEC, the bill seeks to form the National Coordinating Center Against OSAEC and CSAEM under the Inter-Agency Council Against Trafficking. It would also establish “protections and guarantees for child victims, particularly with respect to their psycho-social needs” and “grants additional investigation and surveillance tools to law enforcement agents, taking into account the complexities of the internet and the dark web.”

Poverty, ignorance, and greed certainly play huge roles in the explosion of child sexual exploitation in our midst. But also bearing part of the blame is the indifference of law enforcement agencies and the weak or absent laws governing this matter of great generational concern. It’s about time those much-needed laws are put in place to combat the pernicious activities victimizing our children.