Traces of France in PH 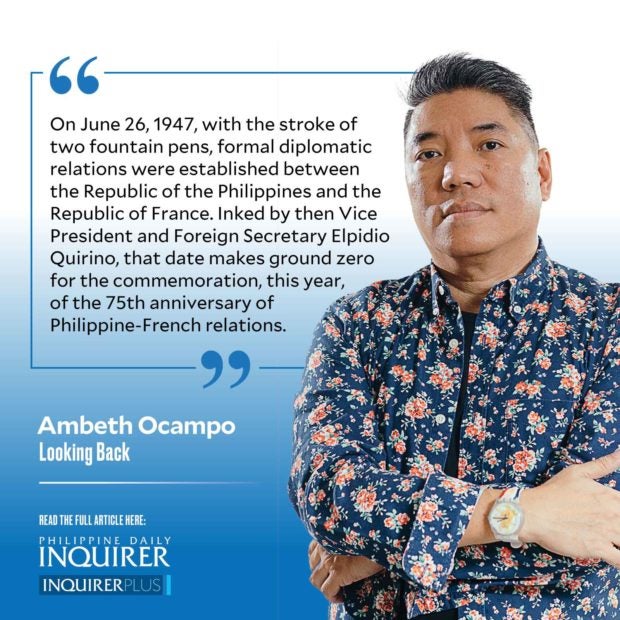 On June 26, 1947, with the stroke of two fountain pens, formal diplomatic relations were established between the Republic of the Philippines and the Republic of France. Inked by then Vice President and Foreign Secretary Elpidio Quirino, that date makes ground zero for the commemoration, this year, of the 75th anniversary of Philippine-French relations. However, as a historian, I take the long view and trace our relations way back to the 1521 Magellan expedition. Fifteen years ago, French ambassador Gérard Chesnel asked me what happened to the Frenchmen who formed part of Magellan’s crew. Not much is known about them, since their names do not appear in the list of stragglers who made it back to Spain as survivors of the Battle of Mactan or the long perilous voyage around the world that began in 1519 and ended in 1522. They probably died from disease along the way, got massacred in Mactan by Lapulapu’s warriors, or were finished off in Cebu during a post-battle banquet hosted by Humabon. Chesnel, in jest, suggested that the true beginnings of Philippine-French relations can be traced to Frenchmen in Magellan’s fleet who stayed on to sire mestizo children. A historian can cast a net, narrow or wide, depending on available documentation (meaning, it’s not tsismis) and his viewpoint. France in the Philippines can be 75 or 501 years old.

To dampen the idea of French mestizo children in 16th-century Mactan or Cebu, I made reference to a letter from Hernán Cortés to the King of Cebu in 1521, apologizing for Magellan’s actions and offering a ransom for the return of Magellan’s corpse, as well as any and all survivors of the Battle of Mactan. The curt reply was that Magellan’s corpse was kept as a trophy of war and would not be returned. Prisoners of war could not be returned because they were sold off as slaves to the Chinese.

My own interest in French historical sources on the Philippines began in my youth, when we took French language lessons under the wife of a French diplomat in Manila who spoke very little English. Our textbook, “Langue et Civilisation Française,” had a blue cover that introduced French language and culture through the adventures of Pierre and Mireille. Another teacher, the wife of a Belgian diplomat, introduced me to French bandes-dessinées or komiks. She did not recommend Asterix, whose language was too colloquial, unlike Tintin, who used proper French. Reading the adventures of Tintin and his dog Milou (Snowy in the English version) increased my vocabulary. Our first teacher, Madame Itier, showed me leather-bound books by Alphonse-Eugène-Jules Itier (1802-1877), an ancestor of her husband who wrote about his travels in Asia. She said one day I would know enough French to read about Itier’s visit to the Philippines from December 1844 to March 1845, touching land in Manila, Mindanao, Sulu, and Basilan. Looking him up on Google to write this column, I was surprised to discover that Jules Itier was also a photographer who took some of the earliest known photos of the Philippines.

French travel accounts of the Philippines dating from the 18th and 19th centuries like Le Gentil, La Pérouse, Mallat, Marche, and Montano provided me with a sense of what the Philippines and the Filipinos were like then. Some accounts are illustrated with engravings that provide a visual link to the Spanish Philippines. E. Aguilar Cruz translated some eyewitness accounts of the Philippine-American War from the original French that were critical of the Spanish colonial system and sympathetic to Aguinaldo and the Filipino struggle for freedom and independence.

Andres Bonifacio read a book on the French Revolution. Jose Rizal translated the 1789 “Déclaration des Droits de l’Homme” (“Rights of Man”) from the original French into Tagalog. The red, white, and blue in our flag, said to be drawn from the US Stars and Stripes, can also be traced back to the French tricolor. Part of our national anthem is lifted as a compliment and reference to the French national anthem. The “bongabillas” that line our landscape are named after the explorer Louis-Antoine de Bougainville (1729-1811) and the banana variety we know as “latundan” is named after the French priest who introduced it from India, Claude Letondal. Current French ambassador Michèle Boccoz will be surprised to find many traces of France in the Philippines.