A legacy of violence 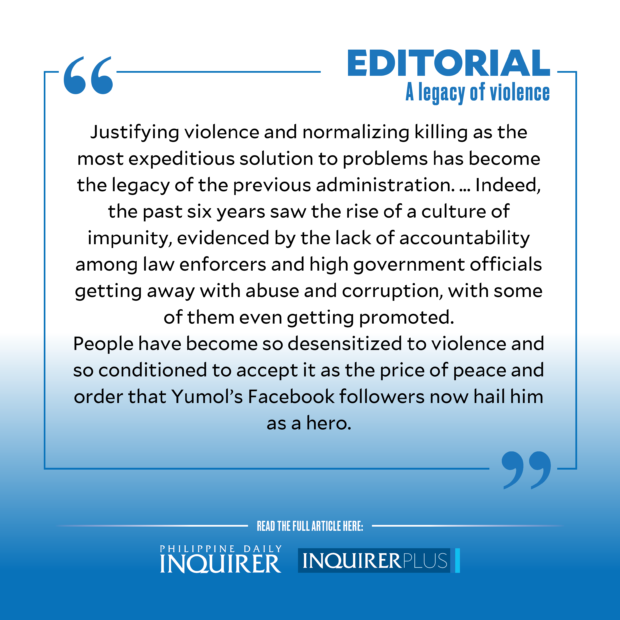 His Facebook posts show the 38-year-old doctor—sworn “to first, do no harm”—to be a staunch supporter of Rodrigo Duterte, zealously defending the former president’s vigilante stance against perceived enemies of the state. Even while police described the shooting as an “isolated incident,” it may actually be patterned after the previous administration’s extrajudicial killing (EJK) of thousands of drug suspects in its brutal drug war.

Yumol’s murderous act seems to follow the former president’s playbook, with his victims suffering the same fate as Duterte critics, dissenters, and activists who were denied due process and the chance to exonerate themselves. Initially Red-tagged or named in what Duterte has touted as his “drug list,” some of them ended up dead for “fighting back” in police raids, jailed on alleged drug cases like former senator Leila de Lima, or shot dead by motorcycle-riding assassins. In his social media posts, Yumol defends such killings, saying that the suspects had been warned repeatedly by Duterte himself. But like the ex-president he idolizes, Yumol could present no proof that Furigay was into the drug trade, as he had claimed online. In fact, the Philippine Drug Enforcement Agency in 2021 issued a certification that Furigay has no pending drug cases at all. The confessed gunman has been indicted for murder and frustrated murder charges.

Quoting the gunman, police said he had a personal grudge against Furigay for closing down his clinic for lacking a permit, and for filing scores of cyberlibel cases against him, as if this “strong reason” justifies taking the law into one’s hands. What the police neglected to mention was how, as Lamitan mayor, Furigay was committed to enforce the law, including those on business licenses, and was only following the judicial process when she sought relief from the courts for Yumol’s online tirades.

But then again, justifying violence and normalizing killing as the most expeditious solution to problems has become the legacy of the previous administration. The former president had been known to punctuate his fiery public speeches with the order “Kill them all!” that the police too often took seriously. Indeed, the past six years saw the rise of a culture of impunity, evidenced by the lack of accountability among law enforcers and high government officials getting away with abuse and corruption, with some of them even getting promoted.

People have become so desensitized to violence and so conditioned to accept it as the price of peace and order that Yumol’s Facebook followers now hail him as a hero. A Change.org petition online is even raising funds for the release of this purported “epitome of a selfless doctor,” who is in jail because he “speaks out against illegal drugs and corruption.” Pro-Duterte bloggers have also painted Yumol as a victim pushed to kill because of the supposed injustices dealt him by the Furigays. It’s a narrative now being amplified by other pro-Duterte and pro-administration vlogs and accounts on social media.

The tributes being given Yumol for his “sacrifice and heroic act” are in sharp contrast to the vitriol-filled disinformation that the doctor regularly spewed online that targeted Duterte critics and the political opposition. That the steady diet of hate and fake news could drive people like Yumol to actually act on his imagined grievances and his supporters to extol him should prompt the National Bureau of Investigation’s cybercrime unit to take cyberlibel cases more seriously to tamp down the toxicity on social media. Meta, the company that runs Facebook, has already taken down Yumol’s account for violating its community standards that classify as dangerous groups or individuals involved in multiple death events, where at least three people are killed. YouTube should follow this lead as its policy also prohibits posts “promoting or glorifying violent tragedies.”

With his huge political capital and his clout as chief executive, President Marcos Jr. should order pertinent government agencies to take the necessary steps to dismantle troll farms sowing ruinous lies that actually mock his ringing calls for unity. And while some people have traced Yumol’s action to the state of his mental health, wellness advocates have cautioned people against associating murderous rage with mental illness, as it could further stigmatize people suffering from this ailment.

It is vital that people take every opportunity to push back against the culture of impunity, lies, and violence, and reject any attempt to accept murderous acts as “heroic.”