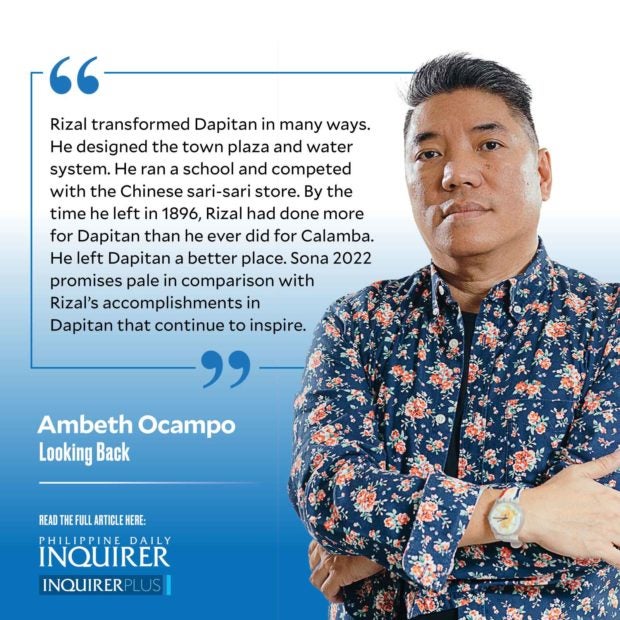 The State of the Nation Address (Sona) 2022 opened with a barrage of economic figures that made me zone out and focus instead on the calm seascape from my room in Dakak. There was no better place to make sense of Sona 2022 than Dapitan, where Rizal was exiled from 1892-1896. Last Monday, Dapitan was out to party, for the first town fiesta since the pandemic lockdown. Former Cultural Center of the Philippines artistic director Chris Millado and Dapitan City brought in National Artists Alice Reyes and Ryan Cayabyab, singer Moira dela Torre, and me to jazz up the 130th anniversary of Rizal’s arrival. On Sunday, the image of St. James, better known here under his now politically incorrect Spanish name, Santiago Matamoros (St. James the Moor Slayer) was brought about in procession, prancing to a Spanish martial air. The town patron saint is depicted waving a sword, astride a horse trampling moors. People greeted the image with cheers, waving the leaves of the San Francisco plant, a reference to a legend when Moro slave raiders sailed away empty-handed after mistaking the San Francisco plants from a distance as hordes of people.

One has to visit Zamboanga del Norte to fully appreciate why it was chosen as Rizal’s place of exile. To get here from Manila in 2022, I had to take a plane to Dipolog, then travel for half an hour by land to Dapitan. When Rizal arrived in Dapitan, by boat, on July 17, 1892, it must have been the end of the world for someone who knew London, Paris, and Madrid like the back of his hand. His first letter from exile, dated July 25, 1892, was addressed to his mother:

“In these days of lack of communication, travel, and deportation, I’m greatly distressed thinking of you, and for this reason I hasten to write you to tell you that I am well here as if I were on vacation, in this politico-military district. I don’t miss anything except the family and freedom.

FEATURED STORIES
OPINION
Education and the state of the Filipino family
OPINION
‘Maid in Malacañang’: A biased review
OPINION
Go for the ‘big circle’!

“Few from there [Manila] come here, for there is only one mail boat every twenty-seven days … Don’t send me anything, absolutely nothing, for I need nothing more than a pair of good shoes, and these are hard to send by mail.”

His next letter to his mother was written five months later, explaining that he only wrote necessary letters but was duty-bound to update the family on his exile. Not one to be depressed, Rizal made the best of a bad situation:

“Speaking of houses, mine of nipa and bamboo still is not finished. But it shall soon be, thank God. Henceforth I shall be able to say that I have land and house of my own. For the information of my sisters: I have more than fifty lansones trees, twenty mangoes, macupa, some fifty langka, santol, balonos, eighteen mangosteen (these do not bear fruit yet and have only from two to six leaves!!). In a few months I shall have lansones, langka, santol in abundance, etc. I have planted some 1,400 coffee seeds, 200 cacao; I have paho besides.

“The boundary of my land cannot be traversed [on foot] in four hours. All of it is paid and I have my title in order. Over my land runs a small river where one can take a bath, only that it needs to be improved. For a beginning I have now one pig which the commandant gave me; I had one hen and eight ducklings, but it was lost and these died. A big mango tree gives shade to the bath; the water comes down from high up the mountain in small cascades: this for my sisters and nephews. I have besides 16 coco trees for making oil and from which we get tender coconut meat.

“I am in very good health; however, I notice that the heat is affecting me somewhat; I do not feel my usual gaiety and I am less active. Besides I have become more brown, almost black. I am walking under the sun every day …”

Rizal transformed Dapitan in many ways. He designed the town plaza and water system. He ran a school and competed with the Chinese sari-sari store. In 1893, Dapiteños “did not make nor know how to make poto, bibingka, there are no bakers and everybody wants to eat bread; there is the sea and fish but there are no fishing nets.” By the time he left in 1896, Rizal had done more for Dapitan than he ever did for Calamba. He left Dapitan a better place. Sona 2022 promises pale in comparison with Rizal’s accomplishments in Dapitan that continue to inspire.