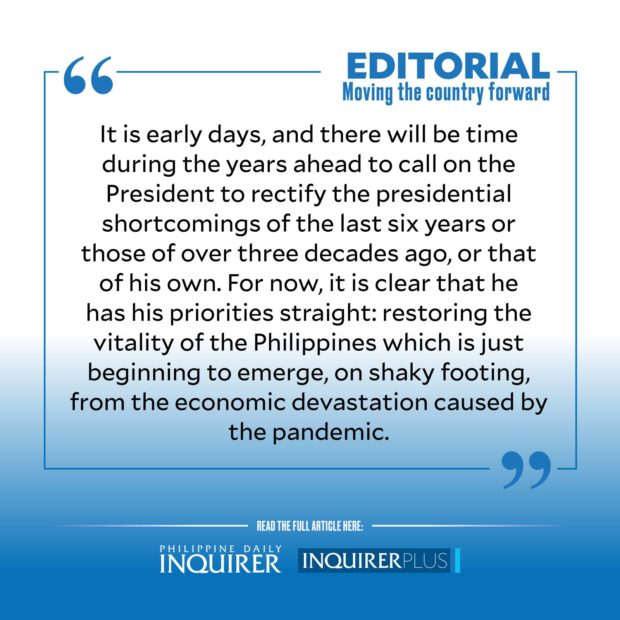 One significant aspect of President Marcos Jr.’s first State of the Nation Address (Sona) was that he made no mention of the misdeeds of his presidential predecessors, whether the most recent one or ones farther into the past. Without this, festering national wounds remain open.

But it is just as well that he didn’t raise those issues, as presidents before him did. By not trying to “cover all bases” that represent all our pressing concerns, the Chief Executive was able to focus the attention of the nation on the single most urgent one: the economy.

And in terms of covering all the bases on the economic front, the President’s speech was on point.

For a policy speech where presidents lay down their plans and priorities in broad strokes, often prompting critics to question the “lack of details,” criticisms for last Monday’s speech were sparse, coming mostly from militant and advocacy groups who questioned the lack of details for the major programs Mr. Marcos laid down. But, for sure, there were glaring omissions, including the issues of corruption, human rights, or ill-gotten wealth.

But for the most part, listening to the Sona was like drinking from a firehose of economic data and insights detailing the solutions he wants Congress to work on.

Topping the list were measures meant to improve tax administration—that is, to collect taxes better and more efficiently—rather than outrightly imposing new and hefty ones, even as the latter cannot be fully ruled out at this point.

This will be a challenge for government as improving tax administration is like trying to keep a badly behaved child in line. Constant monitoring is key, and letting down one’s guard when everything is looking well could mean a return to chaos in an instant.

Improving tax administration has been tried by many previous administrations as a substitute for tax increases many times before, with varying degrees of success, and hopefully, the Marcos Jr. administration pulls this off. But it has to be prepared with alternative sources of revenues in case the strategy doesn’t work.

The President outlined a long and comprehensive list of priority programs he wants done—critical things that need to be done for this country to move forward—and they will cost a lot of money.

This includes doubling down on the infrastructure build-up program that his predecessor began. Some are less flashy but no less ambitious, like the moratorium on the collection of agrarian reform loan payments and calling on Congress to pass a law condoning existing ones, while making future land distribution programs free for beneficiaries.

Equally impressive are Mr. Marcos’ plans for further developing the tourism, social welfare, public health, and education sectors, all of which took heavy hits due to the pandemic and will be key to getting the nation back on solid footing.

As if all those were not overwhelming enough, the President also outlined a list of 19 bills he would like Congress to prioritize, possibly leading some lawmakers long accustomed to a more relaxed pace of work to wonder what they had gotten themselves into.

The question now is how will the Philippines pay for this long, comprehensive, and critically needed wish list?

In this regard, the President’s restoration of public-private partnerships or PPPs as the preferred method for investment funding is welcome. However, this route was shunned by the Duterte administration, which preferred spending on infrastructure projects using funds borrowed from abroad at supposedly concessional rates.

The problem was it bloated the government’s debts and provided avenues for corruption. Hence, PPPs are the correct way forward.

Perhaps most noticeably for Filipinos who had to endure six previous Sonas that started late and were full of cussing and swearing—an embarrassment for the world to see and hear—Monday’s speech had zero deviations from the official version. It means the policies will remain unambiguous and not subject to misinterpretation, no thanks to rambling ad-libs that characterized the past administration.

True, his immediate predecessor’s Sona speeches may have been a low bar to clear. But we should be pleased that he cleared it, nonetheless. The Filipino nation will be setting the bar progressively higher henceforth.

It is early days, and there will be time during the years ahead to call on the President to rectify the presidential shortcomings of the last six years or those of over three decades ago, or that of his own.

For now, it is clear that he has his priorities straight: restoring the vitality of the Philippines which is just beginning to emerge, on shaky footing, from the economic devastation caused by the pandemic.

This is job number one for Mr. Marcos, every lawmaker and government official, and for every single Filipino. Now that the plans were clearly laid down, it is time for all to buckle down to work.