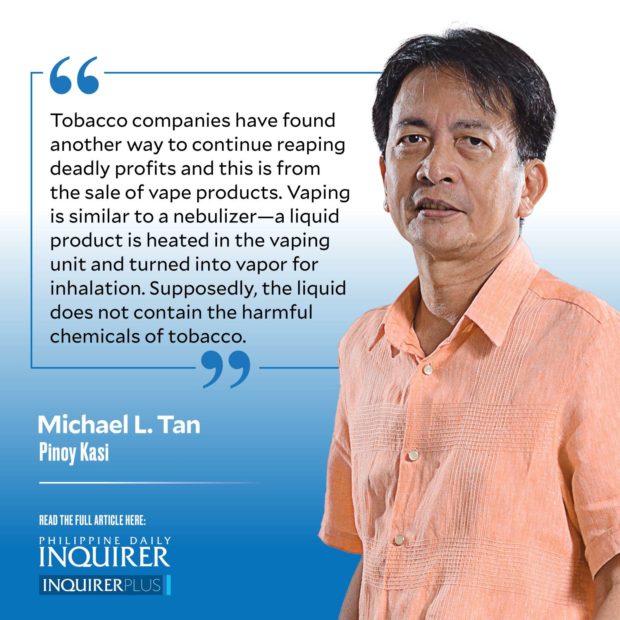 During Rodrigo Duterte’s last month in office, we had a bit of good news with our Supreme Court ruling in the case of Ona vs. the Philippine Tobacco Institute, Inc. that tobacco products are health products and therefore are subject to regulation by the Food and Drug Administration (FDA). That meant tobacco products are no longer going to be treated like other commodities in the market and are instead subject to stricter monitoring and regulation for their contents, and the health effects of those contents.

With tobacco, the harmful health effects have long been documented, costing the Philippines some P215 billion a year just tackling four major diseases coming from tobacco use: lung cancers, chronic obstructive pulmonary disease (asthma, bronchitis, emphysema), heart disease, and stroke. These diseases come from chemicals, many of which are gases when tobacco is smoked.

But the main target of medical associations and consumer groups is the nicotine found in tobacco, which causes the addiction to smoking.

The battle against tobacco is far from over precisely because of that addiction, which can be very difficult to overcome. There are variations in how strong that addiction can be but the majority of smokers will find an uphill struggle trying to get rid of a smoking habit.

Governments, especially those with national health services that subsidize health care costs, have been desperately trying to put an end to tobacco addiction. New Zealand is probably the most radical in trying to turn the tide and end smoking with the next generation. Starting later this year, tobacco sales are banned for anyone born after 2008—and the ban is lifetime, meaning that generation will never be allowed to buy tobacco in New Zealand.

The New Zealand government justified such a drastic plan by pointing out that 5,000 people die each year in that country.

The mortality figure for tobacco-related causes in the Philippines is more than 100,000.

Meanwhile, tobacco companies have found another way to continue reaping deadly profits and this is from the sale of vape products. Vaping is similar to a nebulizer—a liquid product is heated in the vaping unit and turned into vapor for inhalation. Supposedly, the liquid does not contain the harmful chemicals of tobacco.

The problem is the products contain all kinds of flavorings and additives which do not have to be identified. The flavorings are deceptive, making young people, including minors, think that they’re harmless products.

Vaping advocates, including some health professionals, argue that vaping is a good substitute for tobacco because vape users don’t get the harmful gases from smoked tobacco. What’s not said enough is that the vape liquid, when vaporized, has many chemicals which have not been adequately studied, particularly in terms of their effects on the lungs and respiratory system.

The worst part is that the vape liquid contains nicotine, the addictive chemical in tobacco. Vape manufacturers and other vape advocates say vaping helps nicotine addicts as they try to kick smoking. But it’s a crazy proposition for two reasons. First, there are other nicotine substitutes that are available and that have been approved by drug regulatory authorities. The substitutes come in “chewing gum” format, as well as in skin patches. Second, the nicotine in vape products is addictive as well, and with young people as the target, the addictive potential is worst because young brains are quicker to get hooked on psychoactive substances.

Attempts to regulate vaping have moved forward to the point that Republic Act No. 11346 was passed in Congress. Under RA 11346, flavored vapes are also prohibited and the minimum age for sales of vapes will be 21 (from 18). Most importantly, vaping jurisdiction will be under the FDA, just like tobacco.

Unfortunately, the bill was not signed into law by Duterte and was due to lapse on July 24 if not signed by the new president, Ferdinand Marcos Jr.

That was Sunday. I’m writing this column on Monday, the 25th, after searching in vain in the newspapers for some good news, perchance RA 11346 is now a law.

No word, but who knows, maybe it was signed and we’ll get the good news in due time.

Read Next
Making R&D a priority (3)
EDITORS' PICK
Do all the things you do, faster
Nothing’s certain so here’s how everyday Filipinos can make the most out of their Plan B
PNP vows to bring justice for slain Percy Lapid; says probe underway
Percy Lapid’s kin: ‘We demand that his cowardly assassins be brought to justice’
House energy committee chair Arroyo bats for cheap electricity
‘Seniority’ requirement despite vacant posts in DOH bothers senators
MOST READ
Student stabs teacher dead in Samar town
Trixie Angeles quits as press secretary due to health reasons
Not rehired?: Trixie Angeles not on list of reappointed Cabinet execs
Heart Evangelista to stay abroad ‘indefinitely’: ‘Hindi muna ako babalik’
Don't miss out on the latest news and information.