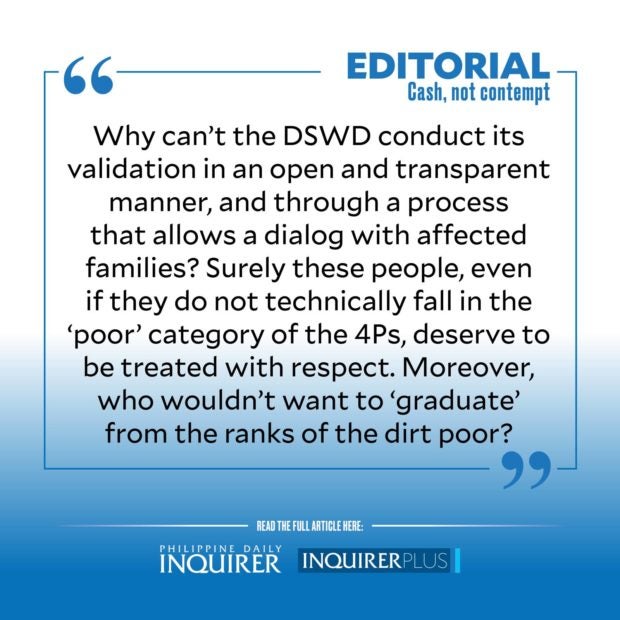 Cleaning up the list of beneficiaries of the government’s Pantawid Pamilyang Pilipino Program (4Ps) was the marching order that President Marcos Jr. gave broadcaster Erwin Tulfo upon his appointment as secretary of the Department of Social Welfare and Development (DSWD).

Acting on that order, Tulfo reported at the Cabinet meeting last week that the DSWD will kick out as many as 1.3 million families from the 4Ps’ list of beneficiaries, as they are deemed to have “graduated” from extreme poverty and no longer qualify for the dole outs.

According to Press Secretary Trixie Cruz Angeles, who announced Tulfo’s report, this number accounts for more than 25 percent of the 4.4 million households that are 4Ps beneficiaries. “This frees up P15B for other qualified persons to replace them [who will] now be included in the 4Ps program,” Angeles said.

The intention may be good, but Tulfo’s plan on how to “cleanse” the list has drawn flak for its absurdity and echoes of a Gestapo witch hunt. Tulfo said he was offering a P1,000 reward for people who could provide information on “nonpoor” households still getting the 4Ps benefits. “We are just making sure that our list is real and clean, that the people receiving the ayuda [aid] are the right persons who need [it],” Tulfo said.

This is not the first time that the 4Ps program has been called out for alleged irregularities.

Patterned after antipoverty programs in Latin American countries, the conditional cash transfer program (CCT) was first implemented in 2008 by President Gloria Macapagal Arroyo, with beneficiaries required to comply with certain conditions such as sending their children to school, bringing them to health centers for regular check-ups, and attending family development sessions.

The CCT became 4Ps during the administration of President Benigno Aquino III, and made permanent by President Rodrigo Duterte in 2019 through Republic Act No. 11310, or An Act Institutionalizing the Pantawid Pamilyang Pilipino Program.

As early as 2013, an audit report by the Commission on Audit (COA) flagged irregularities in the disbursement of P38.915 billion in cash to 4 million families. The report said more than P1 billion was handed out to some 364,000 families whose names were not in the CCT database, while P2.5 billion was given to “ineligible beneficiaries.” In 2019, COA again called out the DSWD for some P10.8 billion unliquidated fund transfers which it said should be returned to the treasury.

Given the billions of public funds allocated yearly for the program, it is only proper to ensure the integrity of the list of beneficiaries and the proper distribution of the money among those qualified for it.

But Tulfo’s bounty-hunting tactic does not sit well with former DSWD chairs Esperanza Cabral, who compared it to the hated “Makapili” system during the Japanese occupation, and Judy Taguiwalo who said this will intimidate impoverished families. “It will pit members of the community against each other much like what happened in (World War) II with the Makapili,” Cabral said.

Sen. Aquilino Pimentel was appalled by Tulfo’s plan, noting that while P1,000 will be given to tipsters, a 4Ps beneficiary only gets around P1,200. He correctly pointed out that it is the DSWD’s responsibility to validate the list of beneficiaries.

By turning to an army of gossips and rumormongers to hunt down unqualified 4Ps beneficiaries, is the DSWD showing its utter contempt for the poor by ascribing bad faith on them and treating them as people out to cheat and outsmart the government?

Just by reading the COA reports, Tulfo doesn’t even have to smoke out the unqualified beneficiaries, as the audit body has found that some barangay officials and government employees were among 428 beneficiaries who received P1.567 million in cash grants in 2013.

Why can’t the DSWD conduct its validation in an open and transparent manner, and through a process that allows a dialog with affected families? Surely these people, even if they do not technically fall in the “poor” category of the 4Ps, deserve to be treated with respect. Moreover, who wouldn’t want to “graduate” from the ranks of the dirt poor?

The backhanded approach to 4Ps beneficiaries lends credence to the observation by concerned sectors that the DSWD, being the government’s main agency attending to the welfare of the poor, must be led by a professional social worker who has the proper training and sensitivity in dealing with the less fortunate.

The last thing poor Filipinos need is brash and arrogant government functionaries. They need the cash, but without losing their dignity.