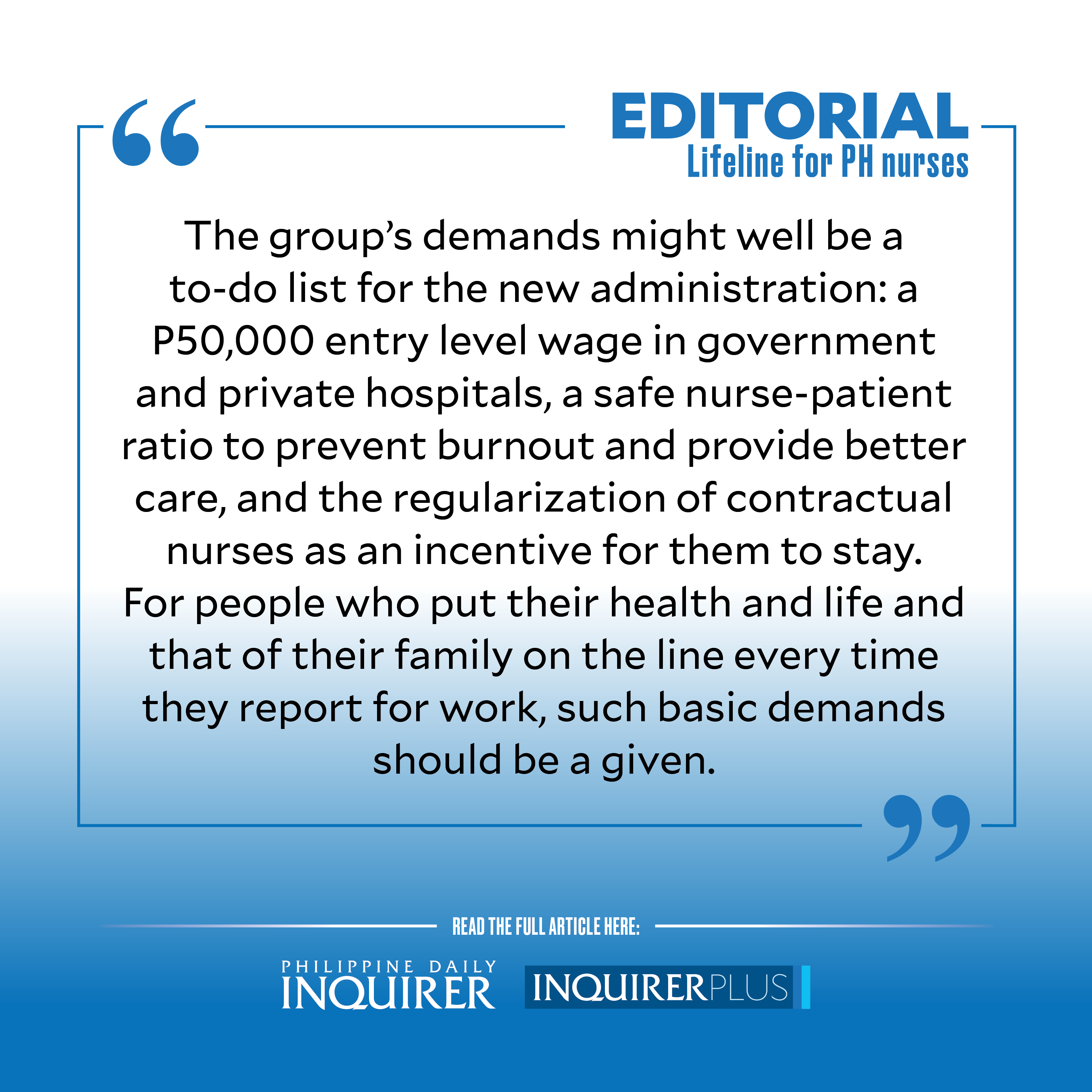 Nurses have been hailed as frontline heroes, but are treated like slaves in this benighted country where the health sector seems to come last in the government’s list of priorities.

Consider: majority of our nurses earn about P10,000 in most private hospitals and a bit higher in government facilities for working extended hours. Although the ideal nurse-patient ratio in hospitals is 1:12, they end up taking care of 20 to 50 patients in each 12-hour shift, especially during a pandemic surge. The promised benefits and pandemic hazard pay come after a two-year wait, if given at all. And, according to the Filipino Nurses United (FNU), despite 22,000 vacant regular positions with much higher pay grades at the Department of Health (DOH), its nurse deployment program employed 16,000 nurses as contractual employees who have no benefits and whose contracts may or may not be renewed.

Is it any wonder that our nurses are migrating in droves to more hospitable shores, despite government efforts to keep them home? Noting the futility of these measures, the government lifted its temporary deployment ban on health care workers in November 2020, and increased to 7,000 the annual deployment ceiling for nurses.

Quoting data from the DOH, the FNU said that out of 915,219 registered nurses in the Philippines, 316,415 or one-third have already migrated. This has led to a “30 percent lack of nurses in every hospital,” according to Jao Clumia, spokesperson for the Private Hospital Workers Alliance of the Philippines, which represents 63,772 health workers.

Constant exposure to the COVID-19 virus has mowed down at least 115,000 nurses as of 2021, said the International Council of Nurses (ICN), citing conservative figures from the World Health Organization. In December last year, the ICN, which represents 27 million nurses in 130 national associations, warned of the imbalance in nurses worldwide as Western countries step up recruitment of health care workers from less developed and poorer countries.

The ICN noted that the Philippines and India are major sources of international nurses working in Organisation for Economic Co-operation and Development countries. It slammed the Philippines’ “train for export” model of nurse education that earlier led to an oversupply of nurses, and the imposition in 2011 of curbs on new course offerings on nursing by the Commission on Higher Education over fears of lower standards and unemployment among nurses. While the moratorium was lifted this year, it is no guarantee that the country’s shortage of nurses would be solved.

Aside from deplorable wages and working conditions, most nurses have lost faith in government promises because of the bureaucratic tangle that ties up benefits due them. Up to 60 percent of health care workers have not received COVID-19 benefits and compensation, the FNU said, citing DOH data. Most of their application for claims have been denied for the most incredulous reason: They were told it was because they used an old form, although the DOH never bothered to give the new forms or even inform hospitals about them.

“I’m not sure if they really want to disburse [the benefits] because they are making it difficult for claimants to get their share,” said Clumia.

In an article published in the Journal of Global Health, Rowalt Alibudbud of the De La Salle University cited chronic understaffing, low wages, unsafe working conditions, and the overseas deployment ban as among the reasons why Filipino nurses were “exhausted and dismayed” with the current health care system, and “seek opportunities [abroad] where their work is valued, and their rights are upheld.”

That seems to be the goal as well of the FNU in addressing the exodus of nurses in the country. The group’s demands might well be a to-do list for the new administration: a P50,000 entry-level wage in government and private hospitals, a safe nurse-patient ratio to prevent burnout and provide better care, and the regularization of contractual nurses as an incentive for them to stay.

For people who put their health and life and that of their family on the line every time they report for work, such basic demands should be a given. With coronavirus cases again on the rise—an average of 2,000 cases a day this week, the highest since February—the cost in lives and opportunities lost because of understaffing in hospitals can be calamitous. The problem, unfortunately, is emblematic of the seemingly low priority that the new administration—which has yet to appoint a health secretary—has accorded the health sector. How about a lifeline package for nurses before our ailing health care system becomes critically ill?