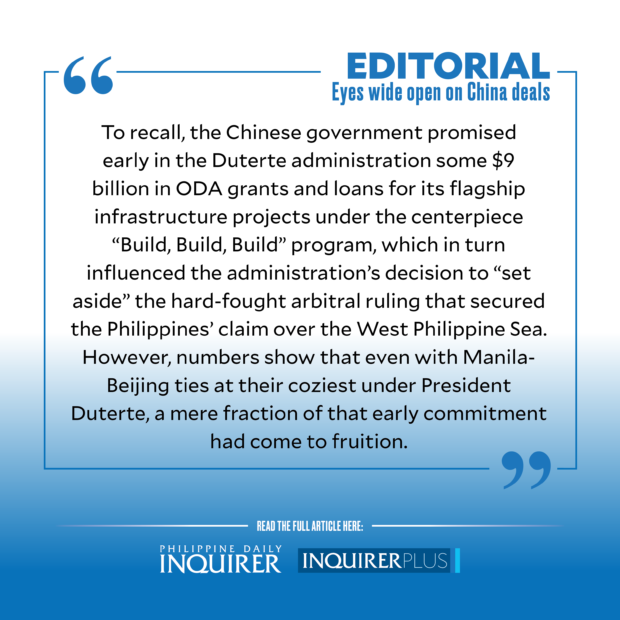 “In plain language, China backed out,” Transportation Undersecretary for Railways Cesar Chavez said last week on the promised support for these key projects that counted among the biggest under the much-touted “Build, Build, Build” program of the Duterte administration.

The cancellation of the loan application leaves three big-ticket railway projects in limbo: the P51-billion, 71.13-kilometer Subic-Clark Railway Project; the P142-billion, 380-kilometer Philippine National Railways South Long-Haul Project or the PNR Bicol Express envisioned to run from Manila to Legazpi, Albay; and the P83-billion Tagum-Davao-Digos segment of the Mindanao Railway Project, even if a number of key contracts had already been awarded.

So far, President Marcos Jr. has directed the Department of Transportation to go back to the negotiating table to see if it was still possible to secure official development assistance (ODA) from China. Mr. Marcos stressed that as a matter of policy, his administration wants to see more investments in an extensive rail network that will connect towns and cities and spur economic growth in the countryside, preferably through concessional loans or even private sector support as government resources have been stretched thin by massive pandemic expenses and inflationary pressures.

But even as the Marcos Jr. administration renegotiates, it should be guided by Dominguez’s warning that China is looking to charge an interest of 3 percent a year on the loans, many times higher than the 0.01 percent a year collected by Japan which remains the country’s main source of ODA funds. It should also learn from the experience of the spurned Duterte administration, which gave too many concessions to China for so little gain despite warnings from many sectors.

To recall, the Chinese government promised early in the Duterte administration some $9 billion in ODA grants and loans for its flagship infrastructure projects under the centerpiece “Build, Build, Build” program, which in turn influenced the administration’s decision to “set aside” the hard-fought arbitral ruling that secured the Philippines’ claim over the West Philippine Sea.

However, numbers show that even with Manila-Beijing ties at their coziest under President Duterte, a mere fraction of that early commitment had come to fruition.

Indeed, actual disbursements from China had fallen far short of the rosy promises at the beginning of the Duterte administration, and yet brazen harassment and incursions into Philippine territorial waters continued throughout his term, prompting retired Supreme Court associate justice Antonio Carpio to conclude that “China took Duterte for a ride.”

Cagayan de Oro City Rep. Rufus Rodriguez thought as much and recommended that the government explore other funding options for the railway projects, adding that the loans from China come with strings attached that “will sacrifice our full sovereign rights over [the] West Philippine Sea.”

Predictably, China sought to reassure Filipinos that it would continue to “support the Philippines to improve its infrastructure.” It did not, however, directly address its delay in acting on the Philippines’ funding applications that led to the cancellation, merely saying that progress had been made “to move projects forward.”

“China’s policy towards the Philippines has always been and will continue to be consistent and stable as ever,” the embassy said. China’s meager actions so far belie its sweet words of friendship, with Filipinos hoping that the Marcos Jr. administration would be more vigilant this time and enter future agreements—as well as revisit current ones—with eyes wide open.

The cancellation is a blessing in disguise, as it gives the Marcos Jr. administration a chance to review the Chinese loans over red flags such as high interest rates and onerous terms that hobbled previous agreements, starting with the $62.09-million agreement for the Chico River Pump Irrigation Project in Kalinga that had been slammed for making our patrimonial assets as loan collateral.

As Sen. Grace Poe rightly said, “The need to boost our infrastructure should not compromise the best interest of our country.” To do otherwise is too steep a price to pay for what appears to be a one-sided friendship.

Read Next
The soul of the Filipino
EDITORS' PICK
Unleash the photographer in you this World Photography Day with vivo smartphones
Look Through: The fate of impounded stray dogs
Metro Manila’s COVID-19 cases on downward trend, but surge not over — OCTA
What to watch out for when selecting a video surveillance solution
Palace warns sugar hoarders after raid on Pampanga warehouse
House energy committee chair Arroyo bats for cheap electricity
MOST READ
WATCH: Rick Astley re-creates ‘Never Gonna Give You Up’ music video 35 years later
DOJ indicts bank officer in $2.1 billion Wirecard fiasco
LOOK: Miel Pangilinan dazzles in glittery pre-debut shoot
Man abducted in Batangas gasoline station, found dead in Quezon
Don't miss out on the latest news and information.