A country of label lovers 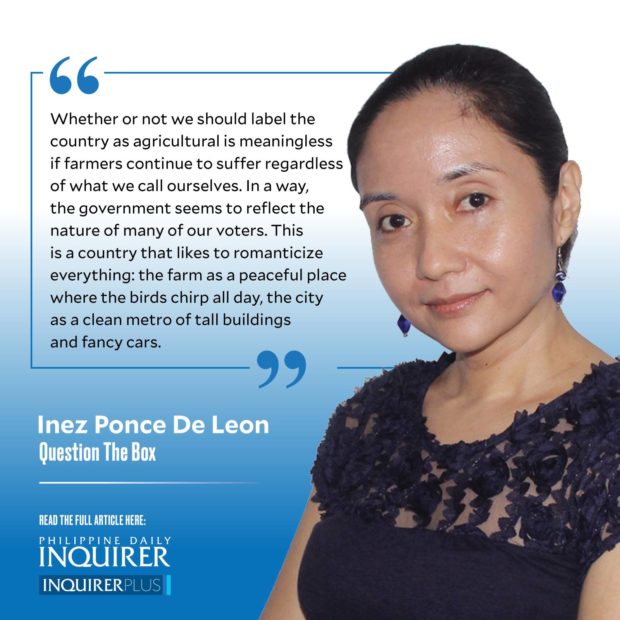 Is the Philippines really an agricultural country?

The label is so pervasive that it’s almost taken for granted. A closer look at the numbers shows a different story. Agriculture’s contribution to our gross domestic product (GDP) has been steadily declining since the 1980s, as the country began shifting to a service-oriented and industrial economy. Today, agriculture contributes about 10 percent to our GDP. The services sector contributes 60 percent, and this proportion is growing.

We might have a lot of land for planting, and a fourth of our workforce is employed by agriculture, but the economic returns are low. Agriculture is no longer the main driver of the economy, but its products are nevertheless important.

This was the crux of economist JC Punongbayan’s argument online. In response, current food security adviser and former Department of Agriculture secretary Manny Piñol slammed his analysis. The backlash online echoed Piñol, even as Punongbayan presented data to back up his claims, and his critics could not.

Piñol’s response seems to rely on the supposed magic of labels, as though calling us an agricultural country automatically makes agriculture our priority. Punongbayan’s analysis, however, should have served as a wake-up call to the dangers of cheap talk, bombastic speech, and claims driven not by data but by an unwillingness to critique how we treat the farmers that we supposedly idolize.

Agriculture has been contributing less to the GDP because farming is not respected. Our history and current events are rife with the narratives of farmers forced into poverty and starvation: they were imprisoned for questioning the coco levy fund in the 1970s; their families were nearly wiped out in the Negros famine of the early 1980s; they have been harassed, arrested, gunned down for asserting their rights; they have to contend with land grabbers who want to turn their lands into highways, subdivisions, and malls.

Former senator Kiko Pangilinan’s book, “Tagsibol,” says it best: The measure of successful agriculture is not in the redistribution of lands but in the emancipation of farmers. We have to ask ourselves: Were they lifted out of poverty? Given access to credit, post-harvest facilities, markets for their goods? Are they truly valued as people?

To quote Pangilinan: “We must look beyond farming as merely the act of planting.”

To this, I add: We must look beyond agriculture as a mere label.

Labels hide government accountability. Whether or not we should label the country as agricultural is meaningless if farmers continue to suffer regardless of what we call ourselves.

In a way, the government seems to reflect the nature of many of our voters. This is a country that likes to romanticize everything: the farm as a peaceful place where the birds chirp all day, the city as a clean metro of tall buildings and fancy cars.

The farm is beautiful until the storms come, or pests invade and wreck whole harvests. The city can grow ugly when it is overcrowded, falls into disuse and disrepair—when it is fashioned according to the whims of those who live in comfort, when it simply becomes about “concrete and steel” rather than “the people that walk its streets.”

This is a country that loves the easy romance of labels but turns away from the hard work of respect, that shrinks from the responsibility of making those labels a reality. It has become a country that cannot handle criticism because it always seems hungry for “good vibes.”

The good vibes are just a façade because the real work of citizenship lies in critiquing and constantly reforming the framework in which all our sectors operate. All of us, regardless of our professions, should be able to earn our livelihood without fear of arrest, loss, or condemnation. But, instead, many in leadership positions have harped on the “hero” label, and expect promising professionals to tolerate poor public services, human rights abuses, and hardships all in the name of “resilience” or “nationalism.”

This is a country that drives people out. And when those who have been pushed away thrive abroad, people are so quick to wave the banner of “Pinoy pride” even when so little was done to keep our professionals rooted here.

This has become a country of escapists ignoring truths and addicted to comforting lies.