Learning from our neighbors | Inquirer Opinion

Learning from our neighbors 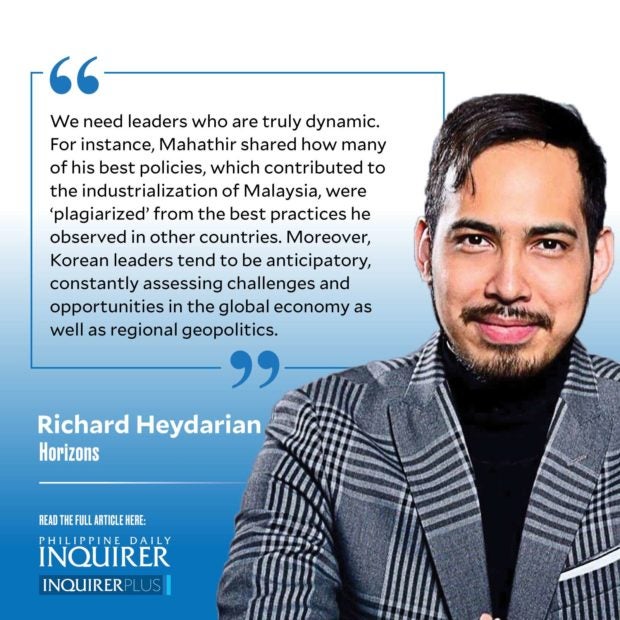 I spent much of the past week in Seoul for speaking engagements at the Asian Leadership Conference, where I joined panels on the state of global journalism as well as political leadership in the 21st century. Among other speakers were the new South Korean President Yoon Suk-yeol, Ukrainian President Volodymyr Zelenskyy, former first lady Michelle Obama, and former prime ministers, most notably Malaysia’s Mahathir Mohamad. Gladly, I was joined by the youthful and dynamic CEO of Angkas, George Royeca, who was also among the young leaders invited to the mega-conference.

Coming on the heels of former Japanese prime minister Shinzo Abe’s assassination, the level of security during the event was extraordinary. Ahead of Yoon’s keynote address, I found myself walking along fully armed, tall, and brawny members of South Korean special forces, whose biceps alone were perhaps twice the size of an average adult’s thighs.

Being back in Seoul also felt quite special. The last time I landed in the Korean Peninsula—it was north of the 38th parallel, where I met North Korean officials and gave a short talk at the Kim Il Sung University in Pyongyang on peace-building and regional cooperation. This time around, I had the privilege of meeting leaders from the Korean National Assembly, which has been dominated by two major parties, namely the Democratic Party and the People Power Party, as well as the Federation of Korean Industries, which includes global giants Hyundai, Samsung, and LG. Fortunately, I also had to chance to catch up with Mahathir, whom I interviewed back in 2019 during his state visit to Manila.

The extreme divergence in the trajectory of the two Koreas, made up of the same people and culture on the same peninsula, is one of the most striking aspects of our modern geopolitics. I have extensively written on the history of economic development in our neighboring countries in these august pages as well as elsewhere. So, dear reader, for the purpose of our column today, let me briefly discuss three key leadership lessons I discussed with folks in Seoul.

First and foremost, we need, in the words of a Korean business leader, “clean and forward-looking” leadership. As Mahathir told us during a conversation on the sidelines of the conference in Seoul, incorrigibly corrupt leaders can end up poisoning the whole society by spawning a whole culture of corruption, beginning with their very election to office.

The strongman Park Chung-hee, whose brutal rule coincided with our own Marcos, was not only far less corrupt than many of his counterparts, but also helped build modern South Korea by effectively bullying the country’s oligarchs into becoming global industrial giants.

Instead of building his own cronies, and drowning in shameless decadence, Park coaxed and cajoled the landed elite to shift into highly risky yet strategically important ventures, which benefited from the state’s proactive trade and industrial policy. Mind you: Today’s largest shipbuilders and chip-makers in the world used to produce toothpaste and garments in impoverished South Korea.

Second, we need leaders who invest in the country’s human capital. Our hosts didn’t forget to remind us of the contributions of Korean leaders, including the American-educated Syngman Rhee, to solid educational institutions. Korea’s public-school teachers, for instance, are among the best trained and best-paid civil servants worldwide.

Lastly, we need truly dynamic leaders. For instance, Mahathir shared how many of his best policies, which contributed to the industrialization of Malaysia, were “plagiarized” from the best practices he observed in other countries. Moreover, Korean leaders tend to be anticipatory, constantly assessing challenges and opportunities in the global economy as well as regional geopolitics. This may partly explain why South Korea’s leaders tend to age significantly when in office, given the pressure of performance from a demanding electorate, which has little tolerance for incompetence and corruption.

Interestingly, it seems that other countries are also learning from the Philippines, but not exactly for the best reasons. Over the news, I heard Sri Lankan analysts discuss the potential return of the Rajapaksa brothers, who recently fled to exile following a people power revolt in Colombo, after noting the return of the Philippines’ most notorious dynasty to Malacañang.