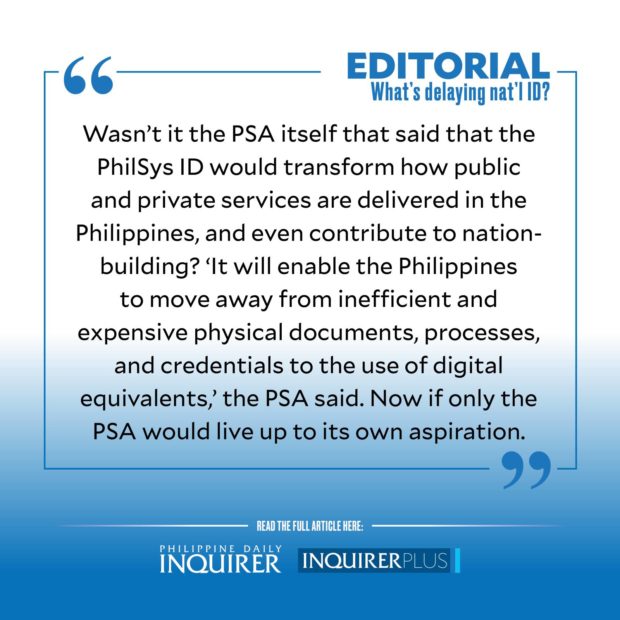 First came complaints from many disappointed applicants about blurry photos and erroneous entries in the national identification cards. Next came last week’s report by the Commission on Audit (COA) pinpointing the agency behind the delay in the rollout of the national IDs—the Bangko Sentral ng Pilipinas (BSP).

In its 2021 audit report, the COA said the BSP’s failure to deliver the required number of ID cards caused a “ripple effect” that delayed the progress of the P3.48-billion project launched in 2018.

Under a memorandum of agreement with the Philippine Statistics Authority (PSA), which manages the Philippine Identification System (PhilSys) database, the BSP was mandated to produce and deliver 116 million pre-personalized IDs from 2021 to 2023.

“The quantity of produced and delivered Philippine ID cards did not meet the requirement provided for in the terms of reference, thus causing delay to the PhilSys project of the government [which was] intended to streamline the transactions in both the public and private sectors,” the COA report said.

The BSP blamed the delays on “pandemic restrictions, technical issues, the lack of personnel to operate card personalization machines, and the limited supply of machine spare parts.” It said it was coordinating with its contractor to ramp up delivery of materials, and to resolve the PSA “system and connectivity issues with their IT (information technology) solutions partners.”

More than just passing the buck and making excuses for its two-year backlog, the BSP must have a catch-up plan, as suggested by COA, to promptly deliver on its obligation. Already embroiled in controversy over the impractical P1,000 polymer bills, the BSP must get its act together to speed up the progress of the expensive ID project.

Despite fears raised about possible privacy issues involving the national ID, the government pushed the implementation of the single identification system for all Filipinos to simplify public and private transactions and accelerate the country’s transition to a digital economy.

When the pandemic struck in 2020, then President Duterte ordered the ramping up of the PhilSys card rollout to aid in identifying the poorest households entitled to “ayuda” or government cash aid during the long lockdowns. And yet, four years since the law was enacted to implement the PhilSys ID, the government is far behind in its target to register all 116 million Filipinos.

The PSA said that as of June 17 this year, 68.3 million have registered for Step 2, with applicants submitting their supporting documents for validation and having their biometric information—iris scan, fingerprints, and ID photo—collected. The PSA’s target is 92 million Filipinos registered by the end of the year. As of June 10, the PSA said it had released 14.3 million cards, with 12.3 million already delivered.

An information campaign could certainly help convince more people to register for the ID and allay suspicions on privacy issues, while more registration booths inside shopping malls would make the process more convenient.

As it is, applicants are turned off by the long wait, not to mention the errors on their printed cards. Former senator Panfilo Lacson himself, principal author of the measure in the Senate, noted that his birthdate was inaccurate on his card, as did some 100 others who have formally complained to the PSA about their erroneous data.

Netizens also poked fun at how their photos are hazy or unflattering, scoring the PSA personnel for being too “lazy” even to check if the pictures are ID-worthy. So despite the PSA being at fault, people who want to change their photos or personal information would have to go through the tedious process again and even pay for it! Not only that, they would have to wait until the PSA had issued most of the IDs.

Clearly, four years should be enough time to iron out these kinks and delays if the agencies in charge want to make the program efficient and successful. Other government agencies should also do their part by ensuring that their processes are in step with the overall effort to transition to paperless and less-cumbersome requirements in government transactions.

Wasn’t the PSA that said that the PhilSys ID would transform how public and private services are delivered in the Philippines and even contribute to nation-building? “It will enable the Philippines to move away from inefficient and expensive physical documents, processes, and credentials to the use of digital equivalents,’’ the PSA said.

Now, if only the PSA would live up to its own aspiration.