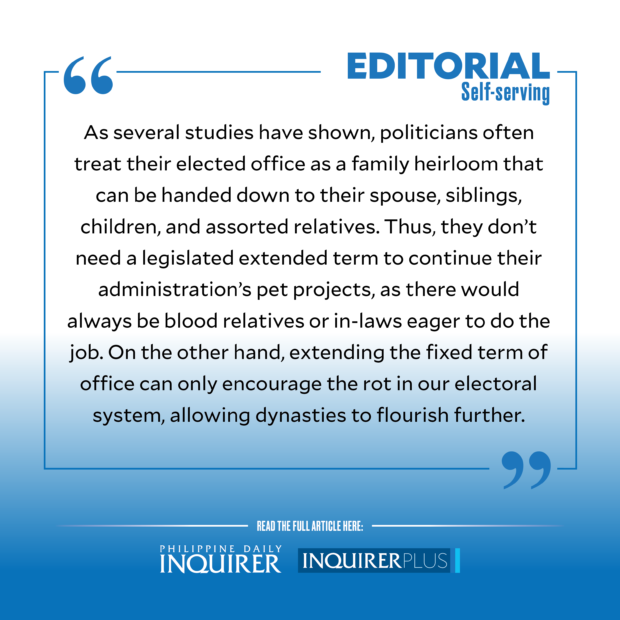 Hardly have the just-elected lawmakers warmed their seats when one of them files a resolution seeking to extend the term of the President and Vice President for up to 10 years. Instead of the current fixed term of six years with no reelection as provided for in the Constitution, a Pampanga representative wants both officials to have a five-year term with one possible reelection.

This is the second time that Rep. Aurelio “Dong” Gonzales Jr. has pushed for a term extension for elected officials, having done so in January, just a few months before the 2022 elections. In 2019, Cagayan de Oro Rep. Rufus Rodriguez floated the same idea as chair of the committee on constitutional amendments.

Gonzales’ proposal seeks to “modify” as well the maximum three consecutive terms of three years each, or a total of nine years, for congressional representatives and elected local officials, excluding barangay leaders. The lawmaker wants the officials to serve up to 10 years instead, with a five-year term and possible reelection.

The resolution does not tackle the term limit for senators, who are allowed up to 12 years in office, that is, a six-year term and one reelection.

Gonzales argues that the current six-year limit for the President and Vice President “appears insufficient” to implement an administration’s long-term programs and policies. Similarly, a five-year term in office, instead of the current and “very short” three years, should help members of the House accomplish their “gargantuan tasks,” he adds.

The lawmaker points out that the landslide victory of President Marcos Jr. and Vice President Sara Duterte serves as the “green light from our citizenry to proceed with the discussion on Charter change,” an issue hardly mentioned in the two officials’ campaign promises.

Gonzales also takes pains to clarify that neither he nor incumbent officials, including the President and Vice President and those on their last terms, stand to benefit from his resolution. Surprisingly, it was Sen. Jinggoy Estrada who brashly spat out the one word that immediately came to mind when the proposed change was mentioned: “Self-serving!”

Said Estrada: “That’s self-serving. I will not allow it.” Asked to explain his reaction, the senator said, “The people will blame us. They’d say, ‘You are there because you want to extend your term.’ So, I’m very meticulous about it.”

Estrada’s candid response reflects more his concern about voters’ perception of him and less his understanding of the resolution’s infirmity and apparent disregard for political realities. As a result, the proposal blithely ignores—and, in fact, abets—a major obstacle to our becoming a truly representative democracy: the persistence and cunning of political dynasties that have cemented a few families’ hold on power and, by extension, the country’s resources.

As several studies have shown, politicians often treat their elected office as a family heirloom that can be handed down to their spouse, siblings, children, and assorted relatives. Thus, they don’t need a legislated extended term to continue their administration’s pet projects, as there would always be blood relatives or in-laws eager to do the job. But, on the other hand, extending the fixed term of office can only encourage the rot in our electoral system, allowing dynasties to flourish further.

As noted in the study “Term Limits and Political Dynasties in the Philippines: Unpacking the Links” by Ronald U. Mendoza and several others, the clear intent of those behind the 1987 Constitution in imposing term limits is “the desire to provide equal access to public office for all Filipinos.” But, unfortunately, the drafters left it to Congress to operationalize this prescription. But how can lawmakers, most of whom belong to political dynasties, be expected to regulate themselves and moderate their greed for power?

Gonzales’ proposal allows already entrenched political leaders to maintain a longer grip on the public office where lucrative government contracts and projects are within easy reach. Unfortunately, as seen in many cases, the concentration of political power and wealth on a few families has seldom spelled good governance, as there is little accountability and certainly no checks and balances.

Finally, there’s the proposal’s ill-timing, coming as it does amid the country’s dim economic prospects. Is it wise to spend scarce resources, time, and energy debating a questionable idea when the same might find better use crafting laws that, for instance, can find ways to beef up government revenues without imposing new taxes? Why create fatter dynasties and give politicians more time to enrich themselves when more people are going hungry and millions are without jobs? Is this insensitive disregard for the country’s poor majority the most we can expect from our honorable lawmakers?