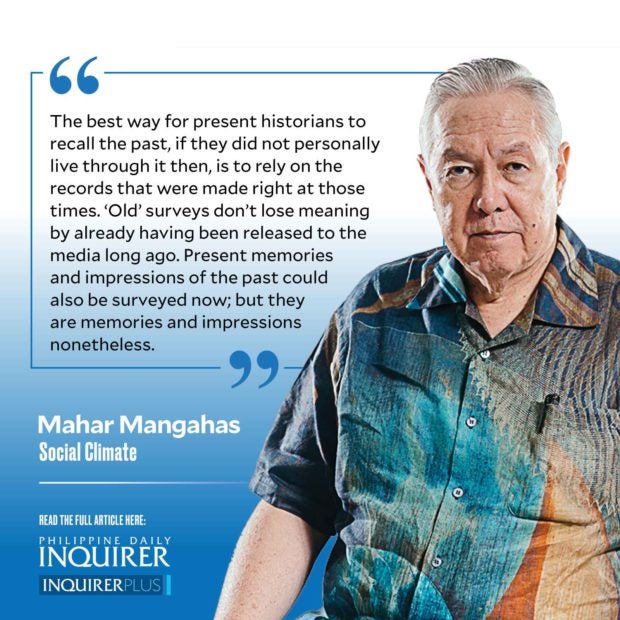 The surveys of Social Weather Stations (SWS) have always been intended as contributions toward the writing of serious history, rather than as source material for mass media reporting. Data from scientific social surveys are permanent records that cannot be denied.

For instance, my Inquirer pieces, “History by the numbers,” “No ‘golden age’ under Marcos,” “The ‘social weather’ during martial law,” and “Ferdinand Marcos ran away,” of last Jan. 8, and Feb. 5, 12, and 19 respectively, are backed up by the SWS archives, which are open to any serious researcher, not just to me.

These surveys of Filipino sentiments felt three decades ago are literally priceless: If ever the original data get lost, there is no way to reproduce them again, for any amount of money. The best way for present historians to recall the past, if they did not personally live through it then, is to rely on the records that were made right at those times. “Old” surveys don’t lose the meaning by already having been released to the media long ago. Present memories and impressions of the past could also be surveyed now; but they are memories and impressions nonetheless.

It has been SWS’ consistent policy, since 1985, to archive all its original survey data. Every answer of every respondent, to every question asked in an SWS survey, is digitally recorded and permanently filed; this is a “bit” of data. It’s not the individual bits that matter, so much as the whole of them put together.

Every SWS survey is statistically representative of the population that it is designed to cover. The way to question a survey is to present alternative surveys; the truth of a situation will derive from the competition of the observations.

SWS follows the best practices of global survey archives; some of its surveys are also stored in those archives and thus easily available to non-Filipinos. Data obtained from first-class procedures deserve to be stored for use and reuse, over and over. Any field responses tainted by dishonesty or malpractice are garbage.

The answers of all respondents in a survey, filed together, make up a dataset. The dataset of a standard survey that addresses 250 questions to 1,200 respondents is a matrix, or table, of 250 columns (one per question) and 1,200 rows (one per respondent), containing 250 x 1,200 = 300,000 cells of data bits. As of March 31, 2022, SWS had archived 331 national datasets and 380 subnational datasets, that recorded the answers of 1,084,623 respondents to 128,896 survey questions. (Backup copies of datasets are stored in two separate locations as insurance against disasters, natural or man-made.)

In line with its advocacy for research on human well-being, SWS repeats certain crucial topics quarterly—see “192 poverty surveys in 40 years” (3/26/2022) and “95 hunger surveys since 1998” (4/2/2022)—with question-wordings carefully maintained, in survey after survey, so as not to influence the trend over time. (But respondents are not repeated; there is fresh random sampling every time.)

These SWS time-series constitute the world’s fastest survey-monitoring of poverty and hunger. They deliberately compete for public attention with the government’s quarterly reporting of gross domestic product, which business-people, particularly those in finance, typically use to rate “economic performance” even though GDP is barely correlated with the people’s economic well-being (see “Watch poverty, not economic growth,” 5/21/2022). The statistics that business people look for tends to be only whatever affects their own businesses.

Other important items that SWS constantly monitors are the people’s recall of what happened to their personal Quality of Life in the past 12 months—got better, got worse, or stayed the same?—and what they expect will happen to it in the next 12 months—get better, get worse, or stay the same? In 2022Q1 there were still fewer Gainers than Losers, but as usual more Optimists than Pessimists.

Why should so much of written history be about political personalities and the competitions among the powerful, rather than about grassroots living conditions and the struggles of the deprived? Source materials for writing the big history include contemporary journalism. The data for writing the little history should include the permanent archives of scientific surveys.