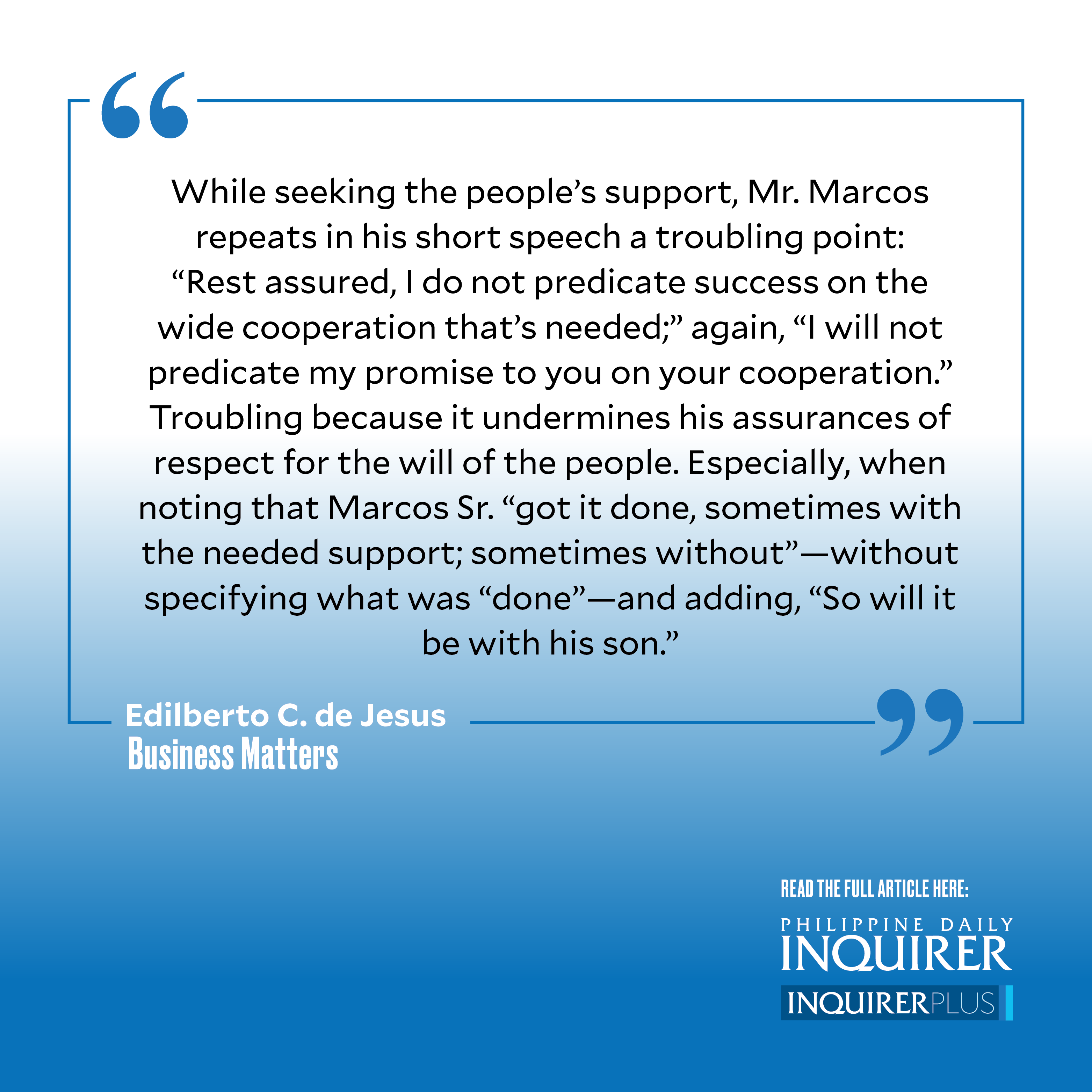 As a candidate, he avoided saying much about what he intended to do as president. Hence, his presidential inaugural address deserves careful parsing. We can skip the expected expressions of gratitude for the voters who elected him and the rhetorical flourishes calling for pagkakaisa (unity). Likewise, we can overlook the cautious, understated tribute to Marcos Sr.—for roads built and rice produced. Assuming that the words reflect genuine sentiments and thoughts, what would be essential to catching in his maiden presidential message are the signals about how he will govern.

Some hopeful signs, starting with his interpretation of the mandate given to him by the voters as their rejection of the “politics of division” and approval of his campaign strategy to listen, instead of rebutting his rivals. His acknowledgment that their policies showed “little incompatibility with my own ideas: about jobs, fair wages, personal safety; and national strength; and ending want in a land of plenty” was significant. Acceptance that his competitors were legitimately engaged in seeking solutions to national problems and capable of generating sensible plans suggests his recognition of a “loyal opposition” as part of the government. This makes possible an essential element in a democratic system—collaboration between the opposition and the ruling party for the welfare of the country.

It is also a welcome departure from his predecessor’s combative approach. Despite his supermajority in Congress, Duterte depended on a small KKK (Kaibigan, Kaprobinsya, Kaklase) circle of trusted people he could control. He treated his political rivals as enemies to be insulted, attacked, and marginalized throughout his term. This followed the classic playbook of populist leaders who identified themselves as the only true, legitimate representative of the people, while demonizing the opposition as their elite oppressors. Hard for President Marcos Jr. to play the populist card.

Prescind for the moment the baggage of the family legacy of martial law that Mr. Marcos carries and from which he cannot easily unburden himself. If he seeks to realize his declared “hope of reconciliation,” he will need to overcome the toxic societal polarization that is Duterte’s destructive legacy. Mr. Marcos appears to recognize the problem and the need to “repair a house divided.”

Professing to “trust the Filipino,” Mr. Marcos declared that he would “backstop” instead of “dictate” their decisions and invest in their “self-empowerment.” He pledged openness to differing views, to “seek, not scorn dialogue; listen respectfully to contrary views; be open to suggestions coming from hard thinking and unsparing judgment.” While stressing the need for unity behind the chosen goal, he promised no hesitation “to change it, should it prove wanting.”

Mr. Marcos claimed the people’s dream as his own (“Pangarap n’yo ay pangarap ko”)—a peaceful, progressive shining future for the country. To realize this dream, “I will need your help; I want to rely on it.” But the government “will get as much done alone without requiring more from you … No excuses; just deliver.” A large promise that people will remember should there be later proposals for tax increases.

But, while seeking the people’s support, Mr. Marcos repeats in his short speech a troubling point: “Rest assured, I do not predicate success on the wide cooperation that’s needed;” again, “I will not predicate my promise to you on your cooperation.” Troubling because it undermines his assurances of respect for the will of the people. Especially, when noting that Marcos Sr. “got it done, sometimes with the needed support; sometimes without”—without specifying what was “done”—and adding, “So will it be with his son.”

Perhaps his repeated assertion that he does not need the people to fulfill his “promises” was intended to project determination and self-confidence. But it assumes informed consent, that people understand and desire what he is promising. The inaugural address cannot detail what these promises might require. We must wait for the State of the Nation for this fuller account. Even then, as Mr. Marcos had maintained throughout the campaign, he should be judged, not on what he says, but on what he does.

Read Next
What about the DHSUD?
EDITORS' PICK
A laptop that maximizes your WiFi so you can maximize your productivity
Powered by style, innovation and passion
Writers’ groups join outcry over KWF move
WHAT WENT BEFORE: School libraries targeted first
House energy committee chair Arroyo bats for cheap electricity
Authors unbowed after gov’t ‘purge’ of books
MOST READ
Actor Anne Heche ‘brain dead’ after crash – US media
Ex-DBM exec Lao of Pharmally mess tagged in overpriced DepEd laptops
SC: Natural-born dual citizens may not renounce foreign citizenship
DA exec quits after ‘illegal’ resolution on sugar importation
Don't miss out on the latest news and information.