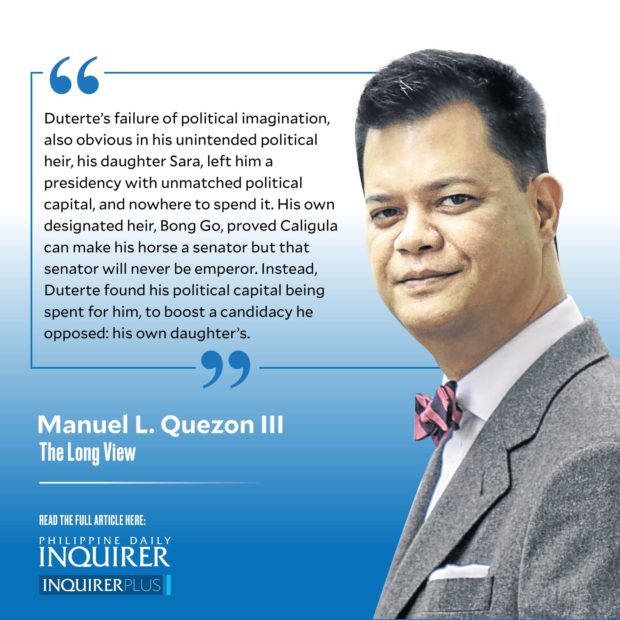 When Rodrigo R. Duterte was elected, his mandate on the surface was typical of the Fifth Republic’s plurality presidencies; his percentage (39.1 percent) put him in the lowest middle ranks of these (only Ramos won on a smaller percentage: both Estrada and Arroyo had higher percentages). What he enjoyed was a profound reorientation of the national political culture after the 30-odd year sway of the Aquinos as icons of democratic empathy shifted to Duterte incarnating it. The effect was that what was a middling mandate became a colossal one as he was rewarded with the highest public opinion approval marks ever achieved—and sustained.

In a sense, this was a victory built on a bluff but one his detractors and other sectors never dared call. He systematically, but selectively, intimidated and forced aside, a representative of the different gatekeeping sectors: big business, both old and new; media, in all its forms, starting with newspapers, then online, and most crucially of all, television and radio; at the same time, he gave free rein to his economic managers to generally pursue business-friendly policies, left the military alone, backstopped the police as it intimidated the public and local governments, and laid a thick carpet of public works funding to please all cooperative local barons. Much as he was criticized for using a blunt weapon—police power and lockdowns—to address the pandemic, the collapse of the economy it caused meant both the national and provincial barons and the electorate became even more dependent—and grateful—for any presidential largesse, creating a climate conducive to continuity.

As the 2019 midterms approached (one he won with the most-resounding midterm victory since before World War II), I was surprised by the sanguine opinion of a veteran observer, former senator Sergio Osmeña, that Duterte’s priorities were merely two: to engineer the election of two of his factotums, Bato dela Rosa and Bong Go to the Senate, and to ensure he would finish his term unlike Marcos and Estrada. All his moves, Osmeña confidently asserted, should be understood in terms of these narrow objectives. By this time, I had been keenly observing the fascinating, little-remarked upon, because hardly noticed, showdown between the two main factions in the Duterte administration, one composed of the ideologues, represented by Cabinet Secretary Leoncio B. Evasco Jr. and the pragmatists, represented by his Special Assistant and Head of the Presidential Management Staff Bong Go. Evasco had an ambitious plan to promulgate a new constitution, purge the bureaucracy, and create a new national movement or party, by mobilizing Duterte’s political charisma. It included a coalition with the Communists and perhaps even the goal of absorbing them; it failed and was rather swiftly, and completely, rolled back by Go who proved even more adept at playing the game of presidential issuances to mark out and expand political turf.

The limits of the Go brand of pragmatism that we must assume the then president instinctively shared were proven when Duterte’s daughter embarked on a political partnership with former president Gloria Macapagal Arroyo to save the Duterte administration from itself, as it began to go adrift while its legislative agenda stalled due to presidential inattention and the House leadership riding roughshod over its members. Arroyo became speaker in an internal coup that maintained the fiction of presidential supremacy while deciding the leadership of the House without a president’s active participation for the first time in its history.

Sara would prove influential as well in the selection of Arroyo’s successor to the speakership, but her own political instincts proved parochial; she pursued, and maintained, Hugpong as a regional alliance instead of displacing the traditional national parties at their moment of maximum vulnerability. Instead, her continued deference gave them an undeserved second wind.

Duterte’s failure of political imagination, also obvious in his unintended political heir, his daughter Sara, left him a presidency with unmatched political capital, and nowhere to spend it. His own designated heir, Go, proved Caligula can make his horse a senator but that senator will never be emperor. Instead, Duterte found his political capital being spent for him, to boost a candidacy he opposed: his own daughter’s, whose powerful legitimacy was derived precisely because she was his daughter. Duterte’s tactical, because overlaid on a deeply personal antipathy for the Marcoses themselves because of his parents, alliance with the Marcoses never gave them as much as they wanted but in the end, they got what they wanted most: the presidency, thanks to his daughter’s alliance with them, brokered by Arroyo, who represents more of an existential threat to the Marcoses than a Duterte in retirement can.

It may be that had Duterte been more ambitious and imaginative, he couldn’t have become the president that so effectively incarnated the National ID, the incarnation of the pre-colonial and anti-modern insecurities, hostilities, and instincts of ourselves as a political collective. Much as his authority has relied on the same manipulation of social media algorithms as the Marcoses, he remains in many ways a more authentic, because more frankly provincial and baronial, political figure than the Marcoses with their rajah-like affectations can ever be; this means, as he himself has conveyed with his body language during his daughter’s early inaugural, which observers primed to observe from such signs instantly seized upon, that the Dutertes remain the only countervailing force, at present, to the Marcoses.

But what the newly inaugurated president and recently turned ex-president both know is that possession is 9/10th of the law; and that no position is more conducive to the evaporation of influence than the vice presidency. If the Marcos Restoration’s political horizon is a mere six years, then an enduring political partnership lasting 18 years: six of Duterte Sr., six of Marcos Jr., and six of Sara, would be the longest uninterrupted era of political dominance by an alliance since before World War II. In a sense, if the Marcoses will be content to be the filler in this Duterte sandwich, they will have deserved their restoration and claim to rehabilitation. The apple of discord, however, is what Duterte Sr. achieved, and which Marcos Jr. must fulfill: the replacement of our Fifth Republic, with a Sixth, made in the image, not of 1986, but 2016.