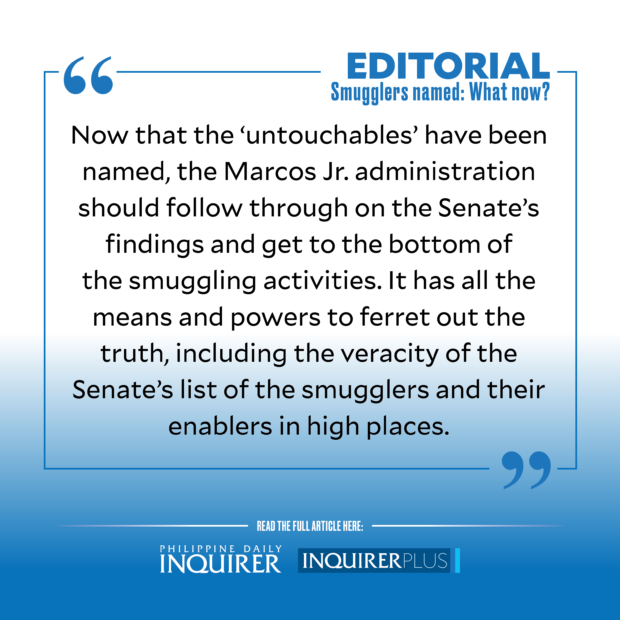 Drowned out by the pomp and pageantry that attended the inauguration of Ferdinand Marcos Jr. as the country’s 17th President on Thursday, was the Senate report naming some high-ranking officials as being allegedly involved in the rampant smuggling of agricultural products into the country.

A 63-page report of the Senate Committee of the Whole, signed by 17 senators and released on June 27, identified 22 big-time smugglers based on an intelligence report supposedly obtained by then outgoing Senate President Vicente Sotto III, who initiated the Senate investigation on the issue.

The highest official linked to the smuggling was no less than the head of the Bureau of Customs (BOC), Commissioner Rey Leonardo Guerrero, who vehemently denied the allegations. Also linked were BOC deputy commissioners Raniel Ramiro and Vener Baquiran, BOC director for intelligence and investigation service Geofrey Tacio, and Yasser Abbas of the BOC import and assessment division.

FEATURED STORIES
OPINION
Education and the state of the Filipino family
OPINION
Go for the ‘big circle’!
OPINION
‘Maid in Malacañang’: A biased review

Tiangco, tagged as “smuggling protector” of BFAR products, said syndicates were linking him to smuggling to deter him from going after the real smugglers.

“It is ironic that I am identified as an alleged protector when two out of the total four cases in the whole Philippines with probable cause were filed by the city government of Navotas,” Tiangco said.

Guerrero questioned the report, saying that the National Intelligence Coordinating Agency, the Armed Forces of the Philippines, and the Philippine National Police denied issuing any report linking BOC officials to smuggling. He said the same Senate report even cited the BOC accomplishments and measures taken against agricultural smuggling.

“With these measures in place, we were able to seize a total of P2.5 billion worth of smuggled agricultural products in various ports nationwide from 2016 to May 2022, while a total of 111 criminal cases have been filed before the Department of Justice against unscrupulous stakeholders,” Guerrero said.

The Senate earlier said there were “untouchables” responsible for the proliferation of smuggled carrots, onions, and other vegetables and fruits from China, and focused on the failure of the Department of Agriculture (DA) and the BOC to prevent the smuggling that has crippled the local agriculture sector.

“We have a situation where agencies take no action even when smuggling is brazenly committed. So aside from the fact that the BOC and the DA have been compromised, there are untouchables. Those involved must be close to the powers that be, which is why we now have this situation,” then senator Francis Pangilinan said.

Due to the influx of smuggled vegetables from China, local vegetable farmers told the Senate they were losing an average of P2.5 million a day, with daily orders declining by up to 40 percent.

The Senate blamed the rampant smuggling on the failure to digitalize the inspection processes, as well as the lack of first border inspections and other loopholes that allowed corruption and smuggling to thrive.

Now that the “untouchables” have been named, the Marcos Jr. administration should follow through on the Senate’s findings and get to the bottom of the smuggling activities. It has all the means and powers to ferret out the truth, including the veracity of the Senate’s list of the smugglers and their enablers in high places.

The new administration should bring the report to its logical conclusion—file cases, go after the other officials and syndicates involved in the illegal activity, and restore the legitimate trade of our local farmers.

Going after smugglers hammer and tongs fits into Mr. Marcos’ promise to give high priority to reviving agriculture and ensuring food security. He even designated himself as concurrent DA secretary to show how serious he is about uplifting the plight of our farmers and the neglected state of our agriculture sector. The Senate report should serve as an eye-opener on a major menace affecting our farmers. Will the new President/DA chief take this on?