There is no such thing as a baby 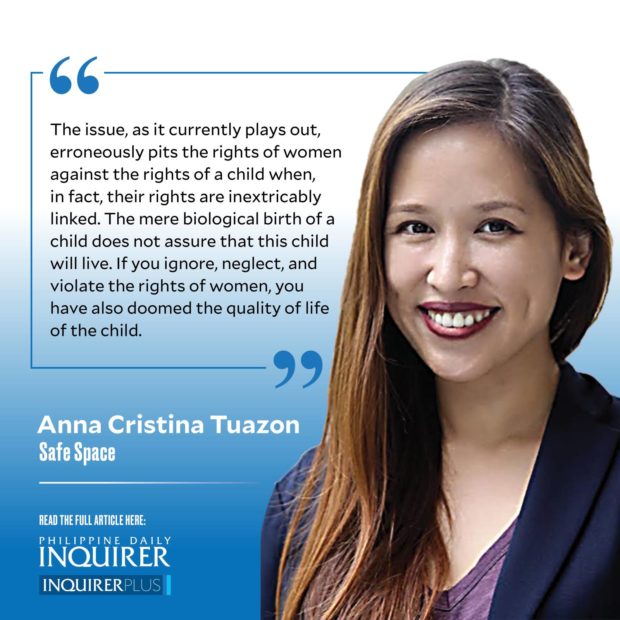 The US Supreme Court overturned Roe v. Wade last week, reversing the ruling that upheld women’s constitutional right to abortion. Is there any implication toward our own policies in the Philippines? Not immediately, since abortion continues to be illegal in our country. If anything, this removes one international pressure from our lawmakers to support any changes on this issue. However, people are still looking nervously at this conservative direction that the US is taking as their policies historically have this uncanny way of finding their way to our shores, for better or worse.

While Roe v. Wade is more known as the ruling that set the precedent for abortion rights, it actually upheld the right to privacy and bodily autonomy. Overturning this ruling then removes the constitutional right to bodily autonomy, which has far-reaching implications on our private lives and intimate relationships. US Justice Clarence Thomas himself suggested, immediately after this ruling, that contraceptive rights, gay marriage, and gay sex should be reconsidered next. This confirms the fears that this is only the beginning of a wider movement to remove civil liberties and rights.

The overturning of Roe v. Wade is like removing the bottom floor, lowering the basic minimum of what it means to live as a free human being—and some American states are already racing to see how low they can go. Trigger laws—laws that get enacted upon the overturning of a precedent—are already waiting. Several states are considering a total ban, with some lawmakers even daring to suggest a mandated procedure to transplant the fertilized egg from the fallopian tube to the womb in the case of ectopic pregnancies. This surgical procedure, by the way, does not exist. This is what happens when we remove a constitutional right: There will always be people who can’t wait to trample it.

In our own country, even outside of reproductive issues, women are already faced with more restrictions and less liberties under our laws. For example, women can be charged with adultery, while men don’t. Women also have to process and produce documentation for their last name after marriage, regardless if they change or don’t change their last names, while men don’t. Gay rights have an even longer way to go, with the Sogie Equality Bill still languishing in the legislature after more than two decades.

Constitutional and human rights provide a basic level of safety. It is protection by default: By virtue of being human, you are guaranteed certain inalienable rights. Removing any of these rights, therefore, should be taken with utmost seriousness and consideration. An issue like abortion is serious on all sides because each side is protecting what they perceive to be basic human rights. The point of contention typically centers on the definition of life (conception vs. birth) that determines whether this is an issue of right to life, as well as the woman’s right to bodily autonomy and self-determination. The biggest harm of the overturning of Roe v. Wade is that it could potentially weaken the protection of the right to bodily autonomy. The issue of abortion then risks being solely about the right of the unborn child and not about the rights of women.

In developmental clinical assessment of children, we routinely ask for prenatal history, which includes the stress of the mother during pregnancy. The stressors that we look for include nonacceptance of her family toward the pregnancy, as well as if the pregnancy was unwanted. We also sometimes check if they were forced to get married as a result of the pregnancy, as this assumes that this creates undue burden and stress. We look for these factors because we know it complicates not just the physical and cognitive development of the child but also increases the risk for postpartum depression, which harms both the mother and the child. The issue, as it currently plays out, erroneously pits the rights of women against the rights of a child when, in fact, their rights are inextricably linked. The mere biological birth of a child does not assure that this child will live. If you ignore, neglect, and violate the rights of women, you have also doomed the quality of life of the child. You cannot protect children by ignoring the rights of women.