Challenges — and a rare opportunity 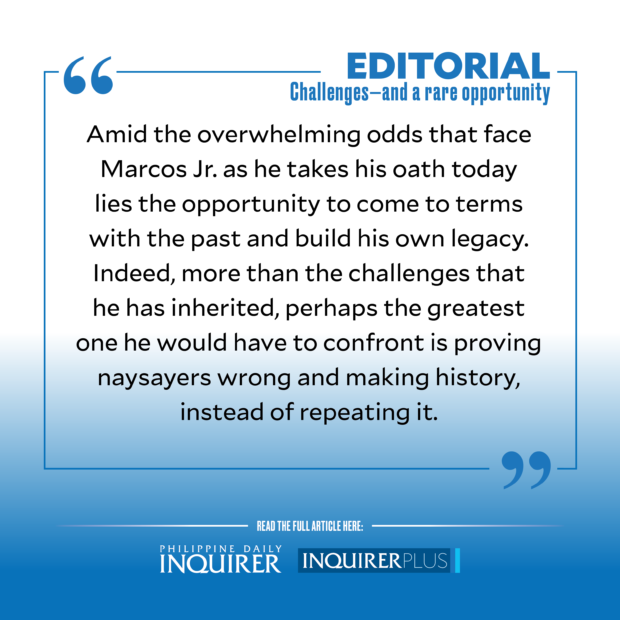 Ferdinand “Bongbong” R. Marcos Jr. takes his oath as the 17th president of the Republic of the Philippines at a most inauspicious time, when pump prices of petroleum products are at their highest in recent memory, prices of basic commodities are inexorably rising, and the debilitating effects of the COVID-19 pandemic continue to be felt keenly.

Adding to this already toxic combination of problems are other equally formidable challenges: the peso sinking to its weakest level in nearly 17 years, thus making imported goods such as food and gasoline more expensive; the national debt hitting record highs at over P12 trillion, and the increasing possibility of a food crisis by the end of the year as farmers who could no longer afford the surging prices of needed agriculture inputs such as fertilizer are forced to cut back on production.

As if these were not enough, the Marcos Jr. administration will also have to muster its mental and financial resources to deal with an education system fractured by the pandemic that struck the country hard in March 2020; face down the continuing brazen incursion of China into the West Philippine Sea, and ward off a possible energy crisis down the road with the depletion of natural gas from Malampaya that fuels as much as 45 percent of Luzon’s power plants.

Given the sheer magnitude of these challenges, each demanding to be prioritized, Marcos Jr. cannot afford to be in a celebratory mood for long, even if his resounding victory marks the triumphant return of the Marcoses to Malacañang just 36 years after the family was chased out of the Palace in 1986 by the peaceful Edsa people power revolt.

Instead, the 64-year-old needs to hit the ground running at full tilt in pursuit of effective solutions to the country’s increasingly complex problems.

With the overwhelming mandate given him during the May 9 elections, expectations are understandably high that he would be able to deliver on promises to make life better for all Filipinos under the “unity” banner that defined his ultimately winning campaign.

He is at least off to a good start by naming a competent economic team, assuaging fears from the private sector here and abroad about his government’s ability to bring down the country’s debt, while spending enough to nurture the country’s nascent economic recovery, and investing in infrastructure and social services.

His appointing himself as the temporary secretary of agriculture was also welcomed as proof of his genuine resolve to personally make sure that the government will pull back escalating prices of key agricultural commodities that are adding to the already heavy yoke borne by the country’s poor, many of whom voted for him as President.

To do that, Marcos Jr. will need all the help he can get, thus needing to work double-time to fill up the empty seats in his Cabinet. As he does so, the fervent hope is that those chosen will be appointed based solely on their unquestionable competence and not as a plum reward for helping seal his win at the polls.

By setting aside the personal in favor of good governance principles, the new President will signal to the Filipino people that he is serious in his supposed resolve to clean the Marcos name, tainted by the cases of corruption, human rights violations, and ill-gotten wealth under his father’s regime.

Amid the overwhelming odds that face Marcos Jr. as he takes his oath today lies the opportunity to come to terms with the past and build his own legacy. Indeed, more than the challenges that he has inherited, perhaps the greatest one he would have to confront is proving naysayers wrong and making history, instead of repeating it.

Brace for the worst

A bitter pill to swallow