The big, unlikely PPP we need 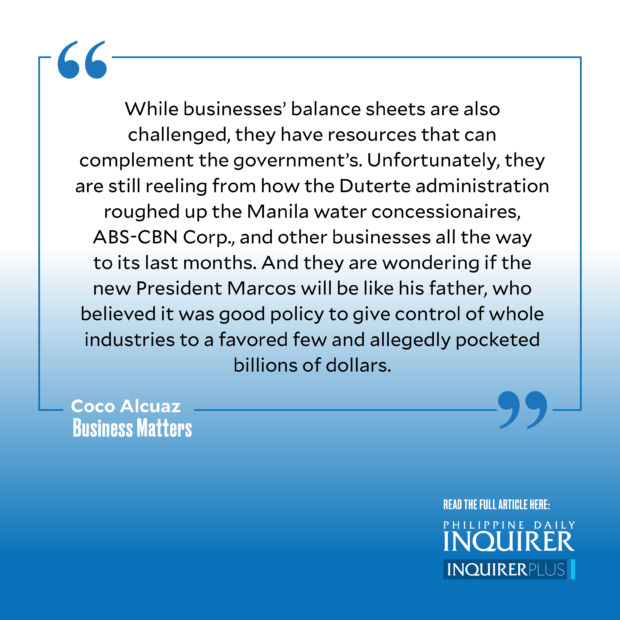 At noon today, Ferdinand Marcos Jr. will take the presidential oath, address his cheering supporters, then move back to Malacañang, where he will be greeted by elite guards and a military band, the dramatic end to a long chapter that followed his family’s hurried exit 36 years ago.

Tomorrow, he faces what may be the most difficult economic storm to face a new president since that same day. Pandemic “scarring” at home; war, inflation, high interest rates, and possible recession abroad.

With this kind of economy, the country needs a better public-private partnership (PPP) than ever before. But the business sector is wary because of memories from the Duterte and Marcos Sr. administrations. For the country to achieve greatness, not just chug along, the government needs to give clear reassurances and the business sector needs to take another chance.

President Marcos Jr.’s predecessors each had one or two big economic shocks, rarely at the start of their term. Mr. Marcos Jr. takes over an economy with deep pandemic “scars”: business closures, job losses, and, at 60 percent, a debt-to-GDP ratio close to 2005 levels. Millions of young Filipinos’ schooling and prospects have been damaged by a world-beating classroom closure. Abroad, factors beyond our control are ramping up food and transport costs, raising interest rates that had been getting cheaper for years and, as global growth slows, making it harder to make a buck. These changes may not be a blip but the end of a decadeslong cycle.

While businesses’ balance sheets are also challenged, they have resources that can complement the government’s. But, unfortunately, they are still reeling from how the Duterte administration roughed up the Manila water concessionaires, ABS-CBN Corp., and other businesses all the way to its last months. And they are wondering if the new President Marcos will be like his father, who believed it was good policy to give control of whole industries to a favored few and allegedly pocketed billions of dollars.

The business sector is grasping for clues because Mr. Marcos Jr. was famously disciplined and on-message during the campaign: unity, unity, unity. And he’s remained disciplined since.

On appointments, President Marcos Jr. is off to a good start in putting experienced and well-known people in key economic posts. If, as American political operators say, “personnel is policy,” the policy seems to be pro-competition, pro-ease of doing business, and pro-inclusive programs: Many of the appointees have been involved with programs like Pantawid Pamilyang Pilipino and universal health care. Many are moving from one government job to another, giving us stability without the baggage. Some are going back to posts they held years ago with valuable wisdom. “I know better now,” one of them told us.

To build on that, President Marcos Jr. should declare that he will treat businesses fairly and equally and then, day by day, prove skeptics wrong. In time, the Philippines will get the jobs and he will get the credit that would outweigh the benefits of favoring would-be cronies.

That may not be too far-fetched. He is not his father, his wife is not like his mother, his friends are not like his father’s friends. Percentages of businesses may not matter to him, national monopolies too difficult to organize given new rules and strong players.

President Marcos Jr. can start by talking with the business sector about public-private infrastructure projects, so that when he announces his first ones, more companies will have the confidence to bid. He needs to build interest because of how the Duterte administration treated franchise holders and sidelined PPPs because money was cheap and told us China would provide.

To be sure, it will take time to convince businesses, especially bigger businesses and foreign investors, to invest in a big way in a range of industries, not just those with the least risk of cronyism or corruption. While they have never stopped investing here, they have a world of choices abroad, or can choose to wait and see. Some are very uncomfortable with the son of the man they hold responsible for thousands of human rights victims and who himself is erasing that history.

But when the pandemic hit, the business sector compartmentalized President Duterte’s human rights record and attacks on legitimate businesses to work with the government in an unprecedented way, even businesses that had been the targets of those attacks. President Marcos Jr. can tap and leverage that love of country and sense of duty.

When President Marcos Jr. is back in Malacañang tonight, he hopefully remembers that today’s celebration is just the start of a chapter that will end in another inauguration, supposedly in 2028. What he and the business sector do together from tomorrow will decide if a better-off population will be cheering again then.