From pink triangles to rainbows 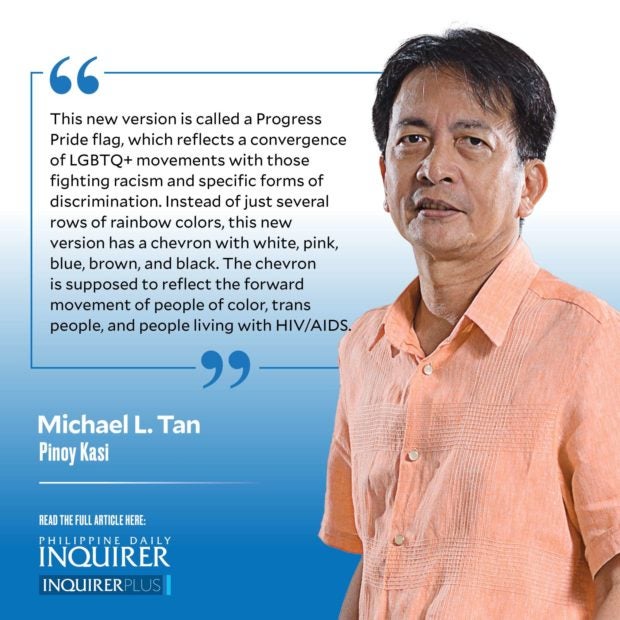 All over the world last weekend, there were Pride marches that displayed the progress of LGBTQ+ (lesbian, gay, bisexual, transgender, queer, and more) movements and causes.

The one in Quezon City was impressive, attended by re-elected Mayor Joy Belmonte and various officials plus ambassadors of several countries, showing how the LGBTQ movements have grown through the years.

But the absence of such marches in many countries should remind us that persecution and hatred of LGBTQs continue, and that in some countries, notably neighboring Indonesia, earlier progress may actually be reversed, as religious-based prejudice and violence rise in reaction to the spread of the LGBTQ movements.

The Pride marches are held in June to commemorate the Stonewall “riots” in New York in 1969, when gay men and transgenders fought back against policemen who had for decades been harassing the gay establishments in the area.

It was during a San Francisco Pride march in 1978 that the first rainbow flag was displayed. It was designed by Gilbert Baker, a former US Army soldier, who mentions being inspired by Judy Garland’s rendition of “Over the Rainbow” in Wizard of Oz.

Hum with me? “Somewhere over the rainbow, way up high/There’s a land that I’ve heard of, once in a lullaby…” Yes, and a place where dreams come true. (Thanks to Spotify for the lyrics)

The colors are aspirational—I am always reminded of the multicolored “wishing candles” sold in Quiapo, representing wealth, good health, good grades, and more.

The rainbow flag is a happy one speaking of changing times and freedom but in the earlier years of the movement, still dominated by male homosexuals, there was another symbol that spoke of darker realities: the pink triangle, with its origins in the Nazi era, which we all know for the Holocaust and the persecution and mass murder of Jews. Years before the gas chambers, Jews were required to wear a Star of David to identify them, making them easy targets for often violent harassment.

Less known are the other groups that were viciously persecuted—gypsies, communists, trade unionists, Jehovah’s Witnesses, and male homosexuals, who were required to wear a pink triangle in Nazi prison camps. Lesbians were occasionally made to wear black triangles, used to identify “asocial” people. The identifying badge meant harassment inside prisons.

The pink triangles gave way to the rainbow flags, which, in turn, have some variations and changes. The US embassies throughout the world have been quite bold displaying the rainbow flag in recent years but this year, when I drove past the US embassy on Roxas Boulevard, I was surprised to see a very different rainbow flag.

This new version, called a Progress Pride flag, reflects a convergence of LGBTQ+ movements with those fighting racism and specific forms of discrimination. Instead of just several rows of rainbow colors, this new version has a chevron with white, pink, blue, brown, and black. The chevron is supposed to reflect the forward movement of people of color, trans people, and people living with HIV/AIDS.

I suspect we’ll see more changes in the years to come, reflecting new awareness and consciousness against discrimination. After I learned about the Progress Pride flag, I checked Lazada and yes, you could order one from them. Not only that, there are two versions, a second one having a circle in the chevron to represent intersex people, those born with chromosomal variations that translate into differences in their genitalia and reproductive system that don’t fit into the male/female binary.

I like the way the flags have caught on, and how they continue to reflect social transitions and change. The other day, I spotted a restaurant along the Sta. Rosa-Tagaytay road with several rainbow flags flying and pointed them out to my kids, who have long known what rainbow flags are. I told them to remember where it was so we could drop in during a future trip.

Point of clarification: rainbow flags aren’t meant to proclaim an LGBTQ-exclusive place. It can mean it’s owned by LGBTQs and/or it is an LGBTQ-friendly place. A reaction to discrimination, the rainbow flags speak of an alternative world of diversity and acceptance.