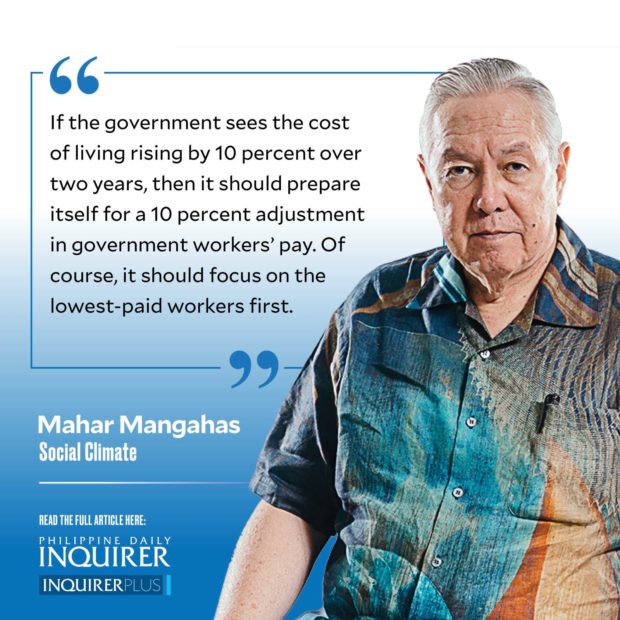 Having the retail price of rice at P20 per kilo sounds nice in a speech, but is so far away from the market price to be feasible in six, or even 12, years, that it is doomed to failure. Making oneself personally responsible for the failure by becoming the secretary of agriculture seems like taking the advice of one’s enemies.

Rice has grown more expensive in terms of money just like everything else, due to general inflation, which gradually lowers the value of money. The inflation that matters is the general increase in the cost of living for consumers. This general inflation rate is the strongest correlate—stronger than agricultural productivity—with poverty and hunger. It averages the increases in prices of very many consumer goods, not just rice.

For any single item, such as rice, the market price is determined by supply and demand. For the government to interfere with the market is too costly. To return to the monopolization of rice imports by the National Food Authority—the biggest money-loser among government corporations—would trash the greatest economic reform of the Duterte regime, that no administration since 1946 was able to do.

FEATURED STORIES
OPINION
Education and the state of the Filipino family
OPINION
Go for the ‘big circle’!
OPINION
The need for a Philippine CDC

The peso-dollar exchange rate is only another price. It is the exchange between what American money can buy and what Philippine money can buy. The US has its own inflation rate, which happens to be less than the Philippine rate; as the dollar loses value more slowly than the peso, it naturally gets more valuable in terms of pesos. If we could control our inflation more tightly than the US, then the exchange would move in the other direction.

Should we return to the dollar-allocation policy days of the 1950s, when the official exchange—applicable only to some lucky people—was only P2 per dollar? Of course not; the floating-rate policy for foreign exchange has proven itself to be much more efficient and much less corrupt.

The world price of oil. The new oil crisis is due to Putin’s imperialistic designs, which the Philippines should not accommodate. Filipinos can cope with it by economizing on fuel use, finding new sources of energy, and so forth.

It is unwise to return to the days of the oil price stabilization fund (OPSF), when gas stations periodically closed, and got beset by massive queues of cars, as the government attempted to dictate the prices of diesel and gasoline. The OPSF lost many billions of pesos, and so was dismantled.

Don’t hinder people from adjusting their earnings to inflation. In my opinion, it is time to let private transportation rates be set by market forces. The government should permit bus, jeepney, and tricycle operators to set their own rates for transport from Point A to Point B. Just don’t let them set up cartels; promote free competition in the transportation market.

Promote flexibility in workers’ wages. I think the government should set the example for the private sector, by adjusting its own workers’ wages, salaries, and benefits in accordance with inflation.

The government is a very big employer in the social sectors of health, education, science, justice, security, and so forth. Its compensation policies for nurses, doctors, teachers, scientists, lawyers, policemen, soldiers, sailors, etc. can exert a strong force in the private labor markets for those services. It also hires many unskilled workers (and tries to outsource their services).

If the government sees the cost of living rising by 10 percent over two years, then it should prepare itself for a 10 percent adjustment in government workers’ pay. Of course, it should focus on the lowest-paid workers first.

Don’t raid government programs that are doing a good job of uplifting the poor. The government’s 15 percent share of gross domestic product is relatively low by world standards. Trying to rein in inflation by cutting government spending should not entail more sacrifices by the poor.

I worry, firstly, about the conditional cash transfer (CTT) program, on which SWS has provided the government with surveys of impact-evaluation and spot-checking. Secondly, I worry about the K-to-12 education program, since SWS surveys show that about half of household heads in the Philippines have not finished junior high school—no wonder that over 40 percent of them feel mahirap.

The CCT and K-to-12 programs took many decades just to get started; they need continuity across generations of beneficiaries.

Read Next
Shall we be a country with many histories?
EDITORS' PICK
Why Tagle is a leading papal contender
Powered by style, innovation and passion
KWF has no power to ban, censor written works – Lagman
In Borongan, nuns play hoops (not mahjong)
A laptop that maximizes your WiFi so you can maximize your productivity
House energy committee chair Arroyo bats for cheap electricity
MOST READ
Why Tagle is a leading papal contender
Arjo Atayde reveals proposal to Maine Mendoza was ‘more than a year’ in the making
My neighbor FVR: From soldier to president
Zubiri on SRA mess: Shameful, disgusting
Don't miss out on the latest news and information.