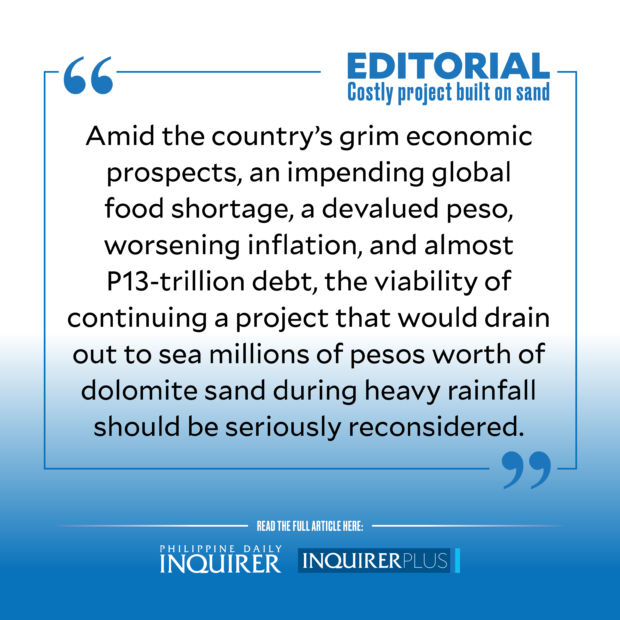 With the Pagasa weather bureau officially declaring the onset of the rainy season late last month, expect heavy rains and typhoons to once again flood low-lying areas, cause landslides in eroded mountainous sites, and wash out to sea the sparkling white dolomite beach at Manila Bay.

In previous wet seasons, driving rains have left this stretch of artificial beach looking like a scraggly garbage dump with detritus from the floods, and its original black sand now visible after the once-pristine layer of crushed dolomite rock was carried off into the bay.

On top of the P389-million initial cost when work on the beach started in 2020, an additional P265-million budget was allotted for its second phase in 2021. It’s an unconscionable expense, critics said of this project that the Department of Environment and Natural Resources (DENR) has defended as part of the rehabilitation of Manila Bay. But why count the cost, countered then presidential spokesperson Harry Roque, adding that one cannot quantify the beach’s salutary effect on the mental health of people stressed out by the two-year pandemic lockdown. The dolomite beach, which was closed for expansion last year, was reopened on June 12, with beach-goers given a limited time to stroll, frolic, and take selfies on this Manila attraction that is still deemed unsafe for swimming.

Controversies have dogged this expensive showpiece from the start. Aside from the tremendous cost, Sen. Nancy Binay cited the lack of consultation on the project, while Sen. Risa Hontiveros and former senator Kiko Pangilinan scored the lack of study on the effects of the use of dolomite sand which, while certified safe by the health department and considered nontoxic in the construction industry, has been linked to respiratory diseases. The two senators also questioned the huge funds poured into the project that should have been used instead on public health and relief goods amid the pandemic.

Marine experts also take issue on the vaunted benefits of this beach nourishment project that some officials said would benefit tourism, commerce, and the environment by protecting coastal properties from erosion and storm surges.

University of the Philippines Marine Science Institute director Dr. Laura David refuted that, however, and said that the project’s location is “a site of current convergence with high likelihood of erosion even during calm days.” The site itself is prone to erosion, she said, adding that storm events will only aggravate the situation. UP Resilience Institute director Mahar Lagmay noted as well that efforts to keep the dolomite on the shore were futile. “The force they are battling is as incessant as the waves that come to shore.”

Aside from the DENR’s lax enforcement of environmental laws, the UP Marine Science Institute also highlighted how “a big part of the Manila Bay’s environmental problems comes from poor waste management,” due to the lack of wastewater treatment plants around the bay and the loss of mangroves which contributed to massive pollution in the area.

The continuing high cost of the project has been acknowledged as well by outgoing President Duterte, who noted that while “dolomite is beautiful to the eyes,” continuous replenishment was needed as the crushed dolomite gets washed away.

The unrealistic cost was highlighted in 2021 when DENR Secretary Roy Cimatu presented the proposed P25.295 billion budget of his department for 2022 during a congressional hearing. Of this amount, the agency hopes to allocate P1.6 billion for the Manila Bay rehabilitation, which will also fund its “white sand” project. Compare those billions to the budget of the agency’s 10 priority projects, among them clean air (P143.01 million); clean water (P315.49 million); intensified forest protection and anti-illegal logging (P696.41 million); scaling up of coastal and marine ecosystems management (P271.801 million); geohazards, groundwater assessment, and responsible mining (P407.65 million), and improved land administration and management (P415.345 million).

Amid the country’s grim economic prospects, an impending global food shortage, a devalued peso, worsening inflation, and almost P13-trillion debt, the viability of continuing a project that would drain out to sea millions of pesos worth of dolomite sand during heavy rainfall should be seriously reconsidered. With people now allowed to travel, dine out, shop in malls, attend face-to-face classes, and work onsite, the destressing factor favoring this white beach has also been rendered irrelevant.

As environmental groups and marine scientists have offered less ostentatious, more effective, and long-term alternatives to rehabilitate Manila Bay, the incoming administration would do well to take a closer look at this money pit and consider shutting it down for good.