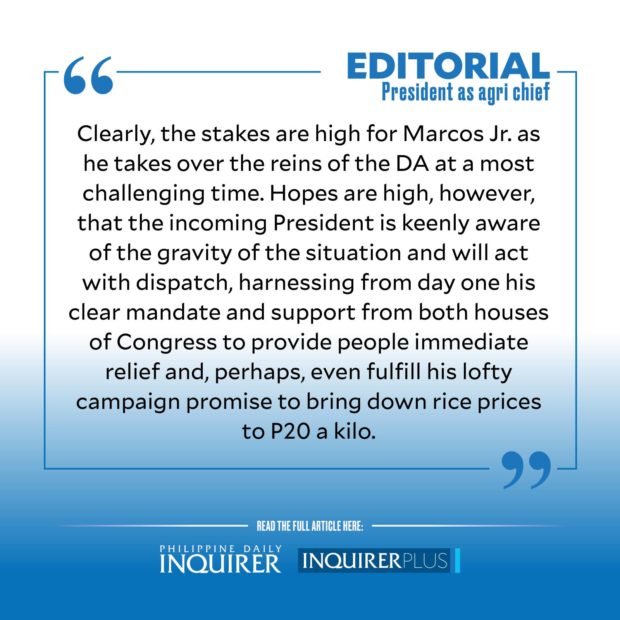 To prove that his administration was putting the task of curing the ills plaguing the country’s beleaguered agriculture sector as a “high priority,” President-elect Ferdinand Marcos Jr. made the surprise announcement on Monday that he would take on the added role of agriculture secretary when he begins his six-year term on June 30.

“We’re going back to basics … and we will rebuild the value chain of agriculture,” Marcos Jr. declared in the briefing, “That is why I thought it is important that the President take that portfolio.”

The incoming president certainly has his work cut out for him as concurrent head of this vital agency responsible for one of the country’s major growth engines, but whose contribution to the economy has been steadily declining over the past five years.

Outgoing Department of Agriculture (DA) Secretary William Dar, who hailed Marcos Jr.’s decision as a “victory” for the sector and a sign of “political will,” said that Marcos Jr.’s first order of business should be to ensure a sufficient and affordable food supply, amid the grave threat of a global food crisis that has already caused prices of basic commodities to escalate. “More than 20 countries have made restrictions on the export of their food products, and the lingering war in Ukraine continues… If I have to equate this, this is like a pandemic as well,” said Dar, who had drawn flak for his food importation policy.

Marcos Jr. will also have to scramble for urgent solutions to the declining local production of rice, as some farmers have been unable to use as much fertilizer to boost their farms’ yield because farm inputs have simply become too expensive. Fertilizer prices have nearly tripled as of May to about P3,000 for a 50-kilo bag of the commonly used urea, from just P1,200 a year ago, and just P800 in 2020, following the surge in prices of petroleum products that are heavily used to produce this commodity.

Compounding these already formidable challenges are urgent concerns over the rampant smuggling of agricultural products and the massive importation of key commodities, from rice to meat and fish. These have discouraged local farmers from ramping up their output, making the Philippines even more vulnerable to global disruptions in the food chain and volatile import prices.

Agriculture groups are optimistic, however, that with the incoming president himself taking up the portfolio, he would be able to make good his promise to increase food production, “counteract” the unabated increase in the prices of food, and “reorganize” the bureaucracy to make the DA ready and “retooled” for the post-pandemic world. Marcos Jr. was reported to have been “bothered” and “disgusted” at the corruption in the DA and the Bureau of Customs, which have both been at the center of an investigation on the rampant smuggling of agricultural products.

Samahang Industriya ng Agrikultura (Sinag) said Marcos Jr.’s decision was “a most welcome development,” noting the “scale of destruction of the local agriculture sector in the last three years.” Said Jayson Cainglet, Sinag executive director: “We believe that only the President-elect can jumpstart the gargantuan task of rehabilitating local agriculture from the carnage created by those at the helm of the DA these past years.”

To his credit, Marcos Jr. is no stranger to the complex problems hounding the agriculture sector. In 2015, as a member of the Senate committee on agriculture and food, he scored the government’s “import-oriented policy” on agricultural products and neglect of the sector. This, he added, had led to the runaway prices of food in the market.

Not everyone, however, is happy about Marcos Jr. taking on the DA portfolio, with the Kilusang Magbubukid ng Pilipinas (KMP) describing the incoming president as “grossly unqualified to face the food crisis which various experts have warned would worsen.” Is there no one else, asked the KMP. “Why is a President-elect with a supposed 31 million-strong mandate seemingly left alone to handle the lingering crisis of our local agriculture?” the group asked, while also raising concerns over the possibility of unfettered corruption at the DA given the mandate as well as size and scale of its bureaucracy.

Clearly, the stakes are high for Marcos Jr. as he takes over the reins of the DA at a most challenging time. Hopes are high, however, that the incoming president is keenly aware of the gravity of the situation and will act with dispatch, harnessing from day one his clear mandate and support from both houses of Congress to provide people immediate relief and, perhaps, even fulfill his lofty campaign promise to bring down rice prices to P20 a kilo.