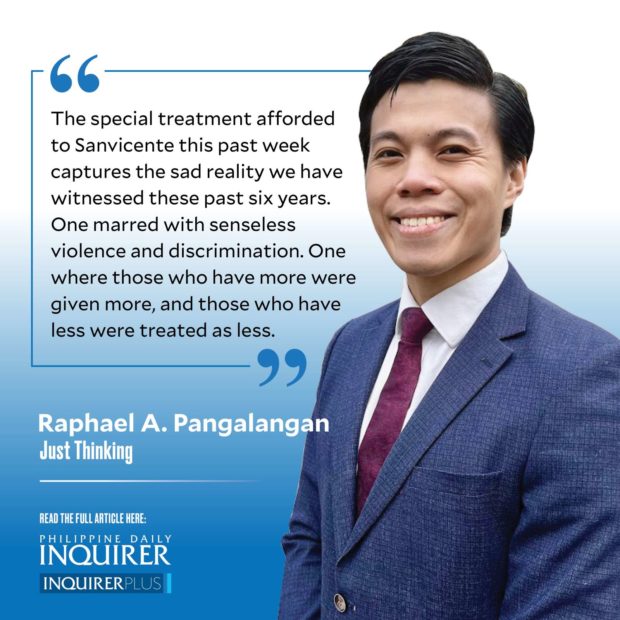 We often think of “Due Process” with a capital D and P, as if it were a proper noun designating a particular, singular meaning. But the constitutional guarantee to due process of law is an amorphous one and takes many a different form in many a different context. Indeed, to speak of due process simply begs asking: What process is due?

Philippine legal order has developed (and US constitutional tradition has been transplanted) over time to provide some helpful guidelines: For the civilly sued, it means being held liable by a preponderance of evidence. For the criminally charged, it is presumed innocent until proven otherwise beyond a reasonable doubt. And earlier this week, for Jose Antonio Sanvicente, it meant holding a press conference at Camp Crame—the national headquarters of the Philippine National Police—with the active support of Lt. Gen. Vicente Danao Jr.—the acting PNP chief.

Hmmm … I don’t quite recall learning about that last bit in law school. But for what it’s worth, I actually do agree with the PNP to the extent that, at this late point in time, the police have lost the opportunity to effect Sanvicente’s warrantless arrest. So instead, as PNP chief Danao Jr. himself so diligently outlined during the press conference: Sanvicente will need “to undergo a preliminary investigation,” and “if the fiscal finds probable cause, then [an information] will be filed” and a warrant of arrest may then be issued.

Woah! Did the PNP chief just invoke Rule 112 of the Rules of Criminal Procedure? Talk about music to my ears. Long live the PNP’s newfound respect for criminal due process! Looks like Sanvicente may not need to hire a lawyer anymore because the PNP chief seems willing to do the job for him.

This sad episode is but a microcosmic glimpse into the state of Philippine law and (dis)order. If there’s one thing it shows, it is that what process is due largely depends on the number of zeros we have in our bank accounts. Sanvicente, clad in a Lacoste polo tee and accompanied by his parents, was welcomed into Camp Crame to surrender his Toyota RAV4 and was later able to return home scot-free.

Alas, if only the victims of the “war on drugs” were given a fraction of this processual protection.

After almost six long years, the body count stands at a reported 30,000—an average of at least 14 victims daily—most of them small-time drug peddlers and slum-dwelling users, and a fifth of them openly killed in police operations. Just earlier this week, in what is the final Real Numbers PH report under the Duterte presidency, the Philippine Drug Enforcement Agency announced that, as of May 31, 2022, a total 6,252 “drug suspects” had been killed in “legitimate” police operations. Even under this state-preferred narrative, at least three lives a day have fallen victim to President Duterte’s drug war.

The PDEA report also shows that of the 345,216 suspects arrested in antidrug operations, only 15,271 were “high-value targets” and only 800 of whom were “drug group leaders and members.” Together, these numbers only confirm that the Duterte campaign was not truly a war against drugs but a war against the poor.

The special treatment afforded to Sanvicente this past week captures the sad reality we have witnessed these past six years. One marred with senseless violence and discrimination. One where those who have more were given more, and those who have less were treated as less.

This is the legacy Mr. Duterte leaves. This is how he should be remembered—not as a strongman “leader,” but as the man who left a trail of blood behind because he simply had no patience for principles.

During the press conference, Mrs. Sanvicente, concerned for her son, pleaded: “Mabait ’yong anak ko.” (My son is a good person.) I recall similar pleas being given by the dearly departed families, particularly by Kian delos Santos kin, who described him as a “good, sweet boy.”