The cost of excising excise taxes 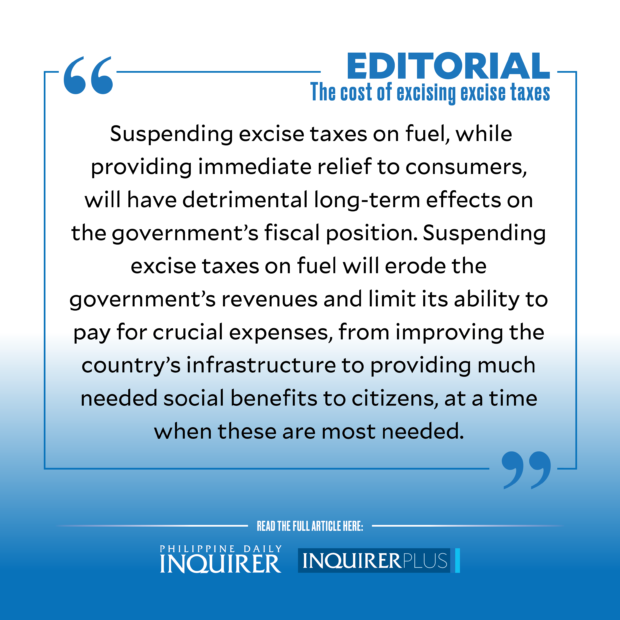 That Filipino consumers will experience more economic challenges over the near term is all but a certainty at this point.

First, the inflation rate is at its highest in three and a half years, and most analysts agree that prices of basic goods and services will continue rising for the next few months.

Second, the cost of money is rising after sitting at historic lows for the last two years. With interest rates soaring in response to inflation, Filipino borrowers will see their loan rates rise in lockstep, and some will be unable to cope with the higher amortizations.

This will mean muted growth for the country, potentially delaying its recovery from the worst economic slump since World War II. Slower growth means fewer jobs for millions of employment seekers and less income for those who are already gainfully employed, as inflation eats into the buying power of the peso.

In the face of these challenges, calls have resurfaced for the government to suspend the collection of excise taxes from petroleum products which are some of the biggest transmitters of inflation throughout the economy.

Indeed, expensive petroleum from the international market—made even more prohibitive locally because of the heavy government tax levy on them—makes factory equipment and diesel generators more costly to run. Heavily taxed fuel also makes agricultural and consumer goods more expensive to transport from their place of production to the end-user. Worst of all, pricey fuel makes it more costly for people to get from point A to point B when people’s mobility is rising as the world starts to recover from the coronavirus pandemic.

Given these factors, it is understandably tempting for the incoming Ferdinand Marcos Jr. administration to respond to the clamor for lower prices by taking the populist route of cutting or suspending fuel excise taxes.

This is a bad idea.

Suspending excise taxes on fuel, while providing immediate relief to consumers, will have detrimental long-term effects on the government’s fiscal position. Suspending excise taxes on fuel will erode the government’s revenues and limit its ability to pay for crucial expenses, from improving the country’s infrastructure to providing much-needed social benefits to citizens, when these are most needed.

What’s worse is that suspending fuel excise taxes will shower these short-term gains unevenly among the populace, benefitting wealthier Filipinos who own and drive private vehicles more than those who use public transportation to commute to and from work daily.

Suspending excise taxes on fuel is like using a sledgehammer to remove a malignant tumor instead of a scalpel.

What then must the incoming Marcos Jr. administration do to alleviate the plight of Filipinos suffering from the burden of pricier consumer goods and services that are expected to rise even more in the coming months?

In the current situation, using a scalpel would mean providing targeted cash assistance to underprivileged Filipinos who are suffering the most from higher prices—in other words, a ramped-up “ayuda” system that was implemented with some degree of success at the start of the pandemic.

Meanwhile, suppose policymakers insist on cheaper petroleum. In that case, they can temporarily suspend the implementation of the 2006 Biofuels Act, which mandates that all petroleum sold in the Philippines have an ethanol content of at least 10 percent.

The problem with this law is that the local sugar industry is not producing enough sugar even for the country’s domestic consumer and industrial needs. As such, Philippine petroleum firms must import expensive ethanol from countries such as Brazil just to comply with the law. Suspending this provision temporarily will provide immediate benefits by lowering pump prices.

Of course, a long-term solution would be to invest in improving the country’s public transportation system, as well as road networks all over the country to make transporting agricultural and consumer goods cheaper.

To be sure, there are short-, medium-, and long-term answers to the current inflation crisis, which the incoming Marcos Jr. administration can implement. However, in choosing which routes to travel, it should resist the temptation to take the easy way out while making the problem worse down the road.