Thanks, but no thanks (2) | Inquirer Opinion PDI
Close
menu
search 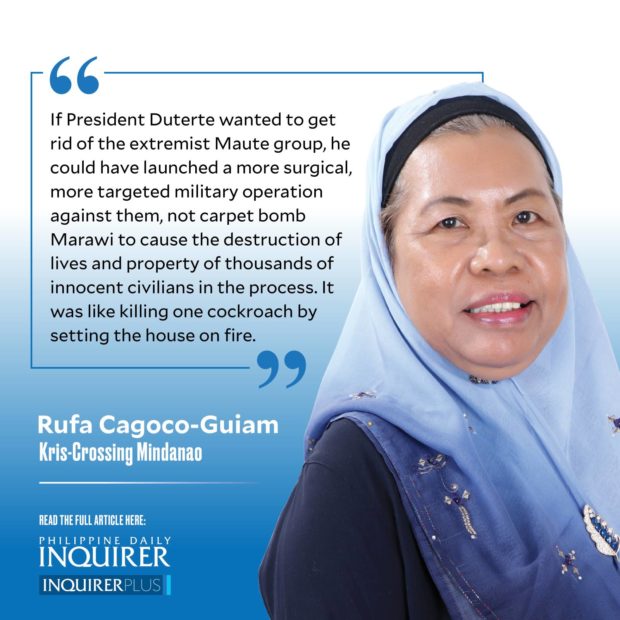 Outgoing President Duterte signed Republic Act No. 11696, or the Marawi Siege Victims Compensation Act of 2022 on April 13, 2022, although it was made known the week after it was signed. Interestingly, its delayed announcement came just days after then-presidential candidate Leni Robredo signed a covenant with the officials of the Bangsamoro Autonomous Region (BARMM) during a campaign sortie and courtesy call to the BARMM leaders. In her written pledge if elected president in the May 9 elections, Robredo committed to prioritize the organization of the Marawi Siege Compensation Board, thereby speeding up the process of rehabilitating the areas most affected by the siege.

Many constituents in the region did not notice this obvious knee-jerk reaction to the popularity of the “pink phenomenon” that drew huge crowds to the Leni-Kiko campaign sorties. But this did not escape many civil society groups in the BARMM, among whose members are my colleagues in our interminable peace advocacy work. Many of them knew that the bill had been sitting on Mr. Duterte’s desk for quite a while after it was passed by the Senate last Jan. 21 (Senate Bill No. 2420), and adapted by the House of Representatives as an amendment to House Bill No. 9925 passed last Feb. 2. My colleagues also believe that Mr. Duterte hesitated to sign the unified bill for the compensation of Marawi siege victims, and even expressed its possible veto, and understandably so. Instead, he ordered to “carpet bomb” Marawi for five months in 2017.

But I will no longer dwell on the what-ifs in the last elections as I have come to terms with the reality of its results, no matter how contentious they are for me and for my colleagues.

According to colleagues from Marawi City, the law comes with many contentious issues. Among others, compensation or reparations for victims of state-initiated massive atrocities like what happened in Marawi should be accompanied by a stringent mechanism for determining equitably who among the victims will get what and how much. This can be done through the creation of an independent Truth Commission that is mandated to conduct a thorough investigation of the siege, and the extent of the suffering of victims and their families. And what about the collective trauma that the victims or survivors have suffered as a consequence of the siege? No provision in RA 11696 addresses this. There are other problems as well, but these could be addressed through the law’s implementing rules and regulations.

This brings to mind the results of a series of listening process sessions that were conducted in 211 conflict-affected communities in different parts of Mindanao as part of the studies initiated by the now-defunct Transitional Justice and Reconciliation Commission. I led 26 community facilitators to gather the narratives from these communities, all heavily affected by state-imposed atrocities during the martial law rule of Marcos Sr.

Across communities my team of facilitators visited, a common refrain was the deep trauma they suffered seeing their loved ones and relatives murdered, tortured, or raped in their presence, a trauma that remains to this day.

Victims of the Marawi siege also feel similarly. Ironically, addressing historical injustice among the Bangsamoro was the centerpiece of Mr. Duterte’s campaign platform, only for him to violate it when he ordered the siege to happen. If he wanted to get rid of the extremist Maute group, he could have launched a more surgical, more targeted military operation against them, not carpet bomb Marawi to cause the destruction of lives and property of thousands of innocent civilians in the process. It was like killing one cockroach by setting the house on fire.

Thank you, outgoing Mr. President. But no thanks.