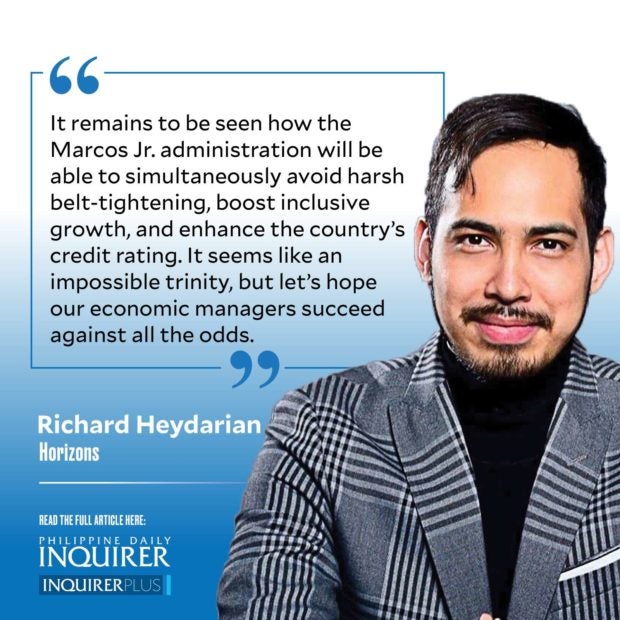 A specter is haunting the global economy—the specter of a new and deeper recession. According to traditional economics, namely the Phillips curve, inflation and growth often work in tandem at the expense of unemployment. But the World Bank is now warning of potential “stagflation” à la 1970s, when the so-called oil shocks from the Middle East, coupled with the economic costs of the Vietnam War, triggered a toxic cocktail of recession and inflation simultaneously.

This time, the looming crisis is the upshot of intersecting crises, namely Russia’s invasion of Ukraine, which has triggered massive food and energy inflation, as well as China’s prolonged lockdowns, which exacerbated supply-chain disruptions.

Russia is not only a major oil and arms producer, but it’s also a leading exporter of fertilizers and, together with Ukraine, responsible for up to 12 percent of the total global calories supply. Meanwhile, China’s faltering COVID policies have undercut the country’s economic momentum, with consumer spending and industrial output decelerating, while youth unemployment reached 18.4 percent in May.

Even China’s National Bureau of Statistics has warned that “the international environment is to be even more complicated and grim, and the domestic economy is still facing difficulties and challenges for recovery.” Given China’s centrality to global production networks, not to mention its massive trade and investment ties with neighboring states, when it sneezes Asia can catch a cold.

To prevent runaway inflation, the US Federal Reserves has made the largest interest rate hike in decades to the detriment of domestic growth. Other central banks, including Bangko Sentral ng Pilipinas, have responded accordingly.

The World Bank has now slashed the 2022 global growth forecast to 2.9 percent, significantly lower than its initial estimate of 4.1 percent growth and almost half of the 5.7 percent growth rate registered last year.

And the equity markets, which were on a wild run in the first years of the pandemic, are in turmoil. Hot stocks, from Tesla (down by 46 percent) to Bitcoin (down by 61 percent) have suffered massive reversals over the past year.

Billionaires such as Elon Musk and Jeff Bezos have lost $124 billion in recent months, with the world’s 50 richest figures shedding more than half a trillion dollars amid a steep depreciation of their stocks. According to economic historian Adam Tooze, the global economic outlook marks “the sharpest deceleration in a post-recession recovery in 80 years.”

So, dear reader, what does this mean for the Philippines and incoming president Ferdinand Marcos Jr.?

In fairness, the incoming administration is rightly prioritizing economic recovery in its first year in office. As the first pro-administration candidate to win a presidential election in decades, Marcos Jr. has a privileged say in next year’s budget, which was largely drafted under the outgoing president. As incoming Budget Secretary Amenah Pangandaman has made it clear, they seek to “draft and implement a [coordinated] budget that will promote a broad-based and inclusive economic recovery and growth.”

The Philippines is expected to post a relatively decent economic growth rate this year, but let’s not forget that the country suffered five quarters of GDP contraction between 2020 to 2021. During the first year of the pandemic, the Philippines posted one of the world’s worst recessions, even as neighboring Taiwan and Vietnam experienced economic growth.

This means that the Philippines has yet to fully recover from the pandemic shock. A potential global recession could undermine even a U-shaped economic recovery. It would undermine efforts by incoming Finance Secretary Benjamin Diokno to avoid harsh fiscal consolidation amid a 16-year-high debt spike by primarily relying on robust growth.

It also doesn’t bode well for the incoming administration’s plans to continue the “Build, build, build” initiative. According to the Department of Public Works and Highways, out of 119 infrastructure flagship projects, which carry a humongous price tag of P5.08 trillion, only 12 were completed as of April.

Not to mention, the long-term scarring effects of the pandemic on labor markets and poverty rates in the country. It remains to be seen how the Marcos Jr. administration will be able to simultaneously avoid harsh belt-tightening, boost inclusive growth, and enhance the country’s credit rating. It seems like an impossible trinity, but let’s hope our economic managers succeed against all the odds.