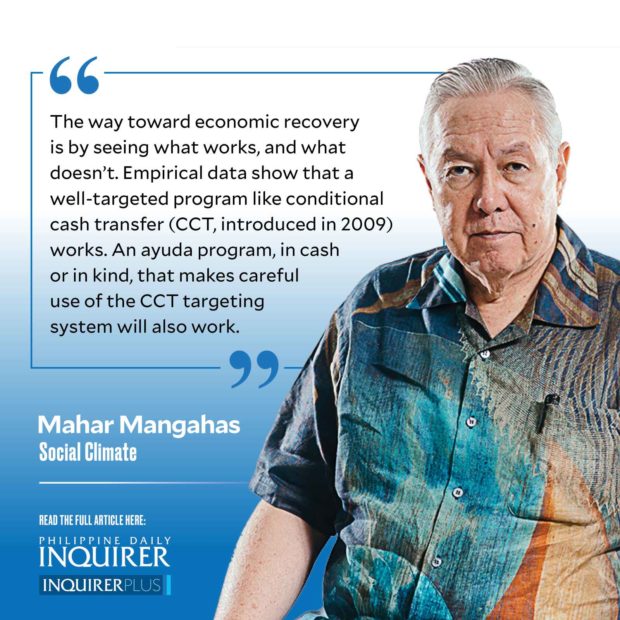 I think of Compassionate Economics, loosely, as a science concerned with the economic well-being of the people in general. Within the textbook definition of economics as the study of the production and distribution of goods and services, being compassionate implies giving priority to the latter. It means paying close attention to suffering from hunger, poverty, and other forms of deprivation. It requires compassionate statistics.

One of the oldest items in opinion research is the straightforward matter of progress over time: Is the survey respondent now better off, worse off, or unchanged in well-being compared to some point in the past? This type of question has been consistently fielded nationwide in the Philippines 144 times in the last 39 years.

Phrasing its question in terms of the change in the respondent’s Quality of Life (uri ng pamumuhay) over the last 12 months, Social Weather Stations’ latest survey finds the Filipino people equally divided into 32 percent Gainers, 34 percent Losers, and 34 percent No Change, giving a tiny Net Gainers score of -2 (“First Quarter 2022 Social Weather Survey: 34% of adult Filipinos got worse off in the past 12 months,” www.sws.org.ph, 6/16/22).

In 144 surveys by SWS and predecessors since 1983, the Net Gainers score has been positive only 21 times, even though the gross national product per person, corrected for inflation, has almost always been growing. The fact that more people have been getting worse off than better off is the main evidence that economic growth did not trickle down to the people in the past four decades.

Unfortunately, the net gainers score collapsed in the 2020 pandemic, hitting a catastrophic -78. Only now, in early 2022, has it partially recovered to a single-digit negative, called “Fair” in SWS terminology. For me, it is not a full recovery until the net score settles into the positive range again.

The Bangko Sentral’s Consumer Expectations Survey (CES) for the first quarter of 2022 confirms this partial recovery with its own net scores of -6.5 for the respondent’s “economic condition,” -18.2 for “family financial condition,” and -19.7 for “family income” when referencing the current quarter. (Whether these are versus a quarter ago, or versus a year ago, is not clear from the report. In any case, the CES statistic is clearly of the “gainer versus loser” type.)

As usual, the disadvantaged have a harder time recovering. The SWS national net score of -2 is the average of +4 in the National Capital Region (NCR), +1 in Balance Luzon, -4 in Mindanao and -12 in the Visayas. (The CES survey has only two geographical components, namely NCR and Areas Outside NCR; the latter has a lower score. Not having more details for AONCR is a technical flaw, since its sample size is enough for several distinct areas.)

The way toward economic recovery is by seeing what works, and what doesn’t. Empirical data show that a well-targeted program like conditional cash transfer (CCT, introduced in 2009) works. An ayuda program, in cash or in kind, that makes careful use of the CCT targeting system will also work.

However, an ayuda program sourced from inflationary funding won’t work, because the data show that inflation is the worst enemy of hunger and poverty. Growth of aggregate production pretends to be a friend but actually isn’t. Public officials will see this when the government produces compassionate statistics itself.