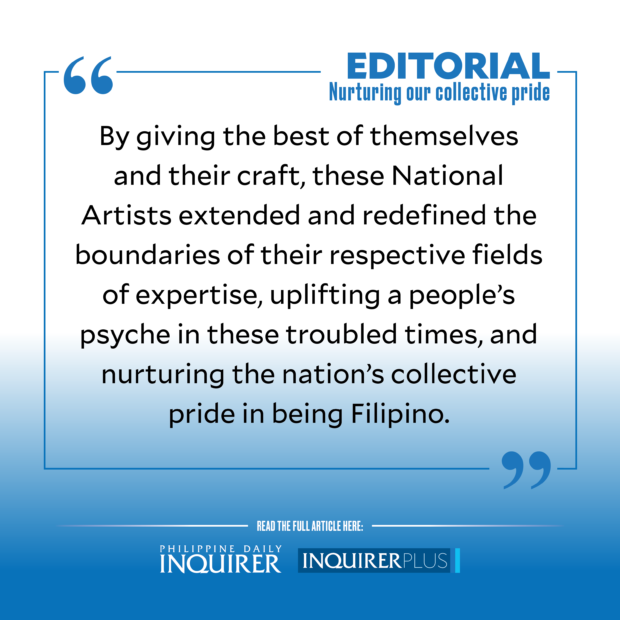 In one of his last acts as the country’s chief executive, President Duterte added eight illustrious names to the Order of National Artists, or Orden ng mga Pambansang Alagad ng Sining, in recognition of their “distinct contributions to the development of Philippine arts and culture.”

This is the second set of National Artists named by Mr. Duterte since 2018, which increased to 86 the number of National Artists named every three years or so from 1972, when the prestigious award was established “to give appropriate recognition and prestige to Filipinos who have distinguished themselves and made outstanding contributions to Philippine arts and letters.”

The beloved and influential painter Fernando Amorsolo, who died earlier that year, was the first to receive this highest national recognition.

That not all in the latest batch of National Artists are as familiar to ordinary Filipinos as “Superstar” Nora Aunor is regrettable, underscoring the dire need to increase public appreciation for the arts and the artists, both dead and living, who have dedicated their lives to their singular passion of further enriching Filipino culture.

It would do well for Filipinos, for example, to know how choreographer Locsin, a “true icon” of Philippine modern dance, has spurred a “growing interest in neo-ethnic style among young artists.”

People should also value and enjoy the extensive work of soprano Cuyugan-Asensio from the field of opera, who has contributed to the renaissance of classical music theater in the country and molded students as chair of the University of the Philippines (UP) College of Music for Voice and Music Theater, until her retirement.

Just as worthy of more recognition is Abad, who has provided Filipinos with “a comprehensive view of the landscape of Philippine poetry and fiction” and a deeper appreciation for them as the country’s most esteemed literary critic.

Also deserving of profound respect are posthumous awardees Mabesa, a giant in the field of theater, who contributed to its growth and diversity as an actor, director, and founder of two important campus theater troupes, Dulaang UP and the UP Playwrights’ Theater; Lim-Higgins, who “masterly innovated and transformed the national costume into a world-class silhouette, inspiring generations of Filipino designers,” and Diaz-Abaya, considered one of the pioneers of the country’s “Second Golden Age of Cinema,” for helming such critically acclaimed films as “Brutal,” “Moral,” and “Karnal.”

Diaz-Abaya is one of three awardees from the world of film, alongside Aunor whose name has become “synonymous to an unparalleled level of craftsmanship in the field of performing arts” as exemplified in her movies “Himala,” “Minsa’y Isang Gamu-Gamo,” and “Tatlong Taong Walang Diyos.” Screenwriter, novelist, journalist, and playwright Ricky Lee was recognized for writing over a hundred Filipino film classics, including the iconic “Himala,” “Jose Rizal,” “The Flor Contemplacion Story,” “Sa Kuko ng Agila,” and Diaz-Abaya’s movie classics “Moral” and “Karnal.”

The Film Development Council of the Philippines considered Aunor’s, Diaz-Abaya’s, and Lee’s induction into the Order of National Artists as a “victory” for Philippine cinema as all three broke new ground, being the first film actress, first female film director, and first screenwriter to be awarded such lofty honors that will henceforth set a high standard against which generations of artists in their field will be measured.

After all, the title of National Artist is jealously guarded by the National Commission for Culture and the Arts and the Cultural Center of the Philippines, both of which panels take great pains to screen hundreds of recommendations from the fields of music, dance, theater, visual arts, literature, film and broadcast arts, architecture, and allied arts, before whittling them down to a select few whom they will jointly recommend to the president for approval.

The rewards and perks that come with the title that “embodies the nation’s highest ideals in humanism and aesthetic expression” are significant. They include a monthly pension, medical and hospitalization benefits, life insurance coverage, a state funeral and burial at the Libingan ng mga Bayani, a place of honor in state functions and other cultural presentations, and a one-time cash award.

The greatest reward, however, is the nation’s sincere gratitude to these first among equals and titans in their field who went beyond “the true, the good, and the beautiful” to hold up a mirror to the lies, injustice, and abuses that otherwise would have gone unnoticed or even normalized.

By giving the best of themselves and their craft, these National Artists extended and redefined the boundaries of their respective fields of expertise, uplifting the people’s psyche in these troubled times, and nurturing the nation’s collective pride in being Filipino.

Stopping the next economic crisis

A chance to put things right