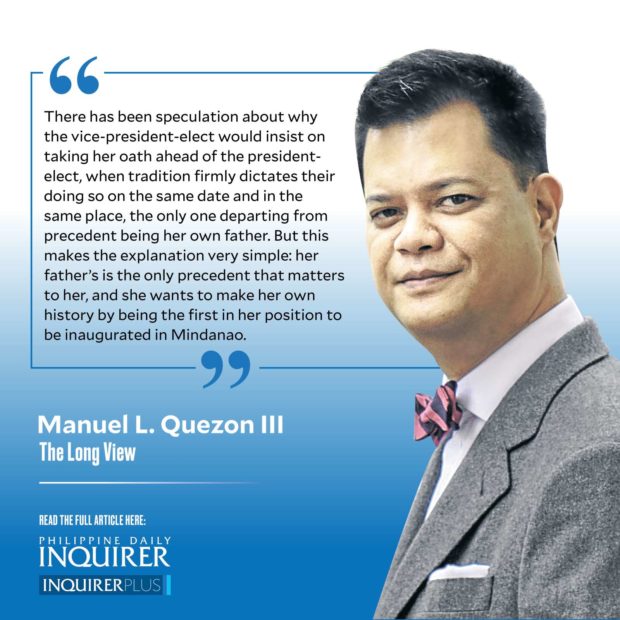 Inday Sara is going to be the 15th vice president, the first military reservist, and the first to hold the education portfolio, the second ethnic Cebuano, the second member of a tandem to win in an election under the Fifth Republic, and second Mindanawon, as well as the third mayor (and second city mayor), and third woman, to become vice president.

As our second Cebuano (ethnically, at least) vice president, she probably inspires the same feelings of wary unease in her partner president-elect as the first one did in his time. Our system departed from the American experience by mandating a separate election for the top two positions. The reason for this was a practical one. Since we would be having our first national election, and there hadn’t been such a position before, the drafters of the constitution believed it was important for a vice president, as possible successor to a president, to have a clear mandate of their own so as to be considered legitimately entitled to the position.

It was widely taken for granted that, in a national election, Sergio Osmeña would certainly win the vice presidency, and so the position was almost not created at all. At first, following American practice, it was assumed by the framers of the 1935 Constitution that a vice president would become concurrent president of the Senate; but then the bicameralists ended up divided on the question of a regional or national election for the Senate, so the unicameralists won. What, then, was there for a vice president to do?

But two Cebuano delegates, both rivals of Osmeña, were more blunt, admitting “that if [the vice president] position was created […] in view of the reconciliation between […] Quezon and Osmeña, Mr. Osmeña would be the Vice President and they would again be the underdogs in Cebu.” In the end, Quezon sent word he would only run if Osmeña did, too, and an optional Cabinet job for the vice president was included in the charter. Interestingly, when the Senate was restored in the 1940 amendments, it didn’t include making the vice president presiding officer of the Senate.

Here, the only example I could find of a vice-president-elect taking their oath ahead of the president-elect is not a particularly inspiring one. Arturo Tolentino had moved to reestablish the vice presidency in 1984 but what the Marcos parliament approved was to make the position eligible for a ministry or to be prime minister, but not to succeed to the presidency. Still, he ran as Marcos’ running mate in 1986.

Embroiled as he was, in the fall and exile of Marcos, Tolentino told many versions of events concerning his oath. He explained his absence during Marcos’ Feb. 25, 1986 inaugural by claiming he’d taken his oath ahead of time, before Chief Justice Ramon Aquino, on Feb. 16, 1986. On March 30, 1986, a little over a month after fleeing the country, Ferdinand Marcos in Hawaii declared his intention to reclaim the presidency. Loyalists began rallying in the Luneta every Sunday, calling for his return. Tolentino started attending, and on July 6, 1986, he took the plunge in the comical Manila Hotel takeover, during which he took his oath — again, if he was to be believed — and then proclaimed himself acting president. He called on the Batasang Pambansa to reconvene and he appointed a Cabinet — and was laughed out of town.

There has been speculation about why the vice-president-elect would insist on taking her oath ahead of the president-elect, when tradition firmly dictates their doing so on the same date and in the same place, the only one departing from precedent being her own father. But this makes the explanation very simple: Her father’s is the only precedent that matters to her, and she wants to make her own history by being the first in her position to be inaugurated in Mindanao. Symbolically, she will join the inaugural of Marcos Jr. as a guest and witness to the culmination of a historic election, and less obviously as a subordinate.