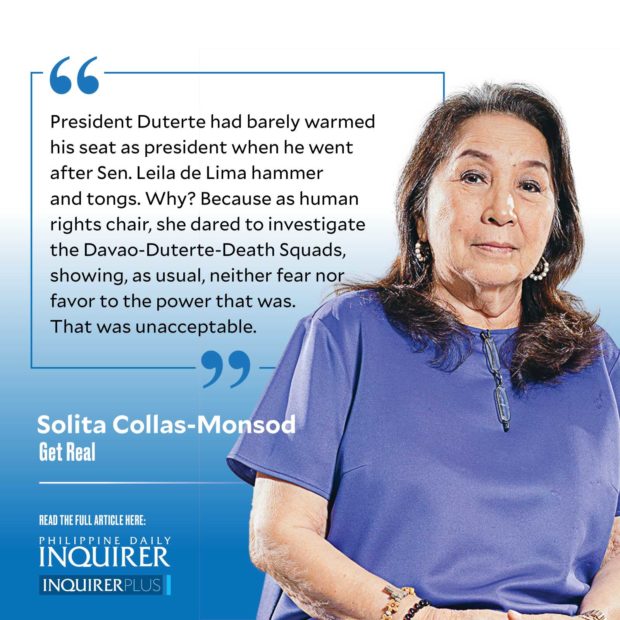 It’s that time, Reader. The time for endings, and beginnings. Time for commencement exercises, as in university graduations. Time for adjournments, as in the Senate, when departing senators (not from this world, but from the Senate) gave their final (at least until the next elections) and sadly, sometimes false, or even forgettable, addresses to their colleagues and to the nation.

And of course, it is also the time for the accompanying assessments, as in how they performed during the past six years, or the past three years, or the past four years depending on whether we are referring to presidents, senators, or congressmen and other local officials (barangay officials have stayed longer), or college graduates.

The final assessment of the Duterte administration, in terms of whether or not it achieved the targets President Duterte himself had set out at the beginning of his term, will be provided by the Philippine Statistics Authority (PSA) Statistical Indicators on Philippine Development (StatDev) sometime in the middle of July, based on reports by different agencies concerned and validated by the PSA. If memory serves me right, there were over 500 targets contained in the Philippine Development Plan.

So far, though, two problems have been identified regarding the PSA assessment. One is that those 500 targets, no matter their relative importance, are given the same weight (e.g. employment targets vs. number of voter education seminars). The other is that the targets for security, and peace and order (e.g. the antidrug war) are not published. Let’s hope the new administration addresses these problems, rather than terminate StatDev.

I refer to the case of Sen. Leila de Lima. In case you have forgotten, Reader, De Lima was an election lawyer par excellence before she was picked by Gloria Macapagal Arroyo to be chair of the Commission on Human Rights, then by Benigno Aquino III to be secretary of justice. Unlike a lot of other appointees, she was picked for what she knew, rather than who she knew. She performed excellently, showing neither fear nor favor with anyone. She was elected senator in 2016, while Mr. Duterte won the presidency.

Mr. Duterte had barely warmed his seat as president when he went after De Lima hammer and tongs. Why? Because as human rights chair, she dared to investigate the Davao-Duterte-Death Squads, showing, as usual, neither fear nor favor to the power that was. That was unacceptable.

Mr. Duterte, in his first State of the Nation Address, claimed that he was not vindictive. That claim was belied by how he relentlessly persecuted De Lima, even announcing publicly that he would make sure she was jailed. Then he embarked on a campaign of vicious character assassination, including accusing her of being the mother of all drug lords and, for good measure, of having an affair.

These two sets of accusations were particularly ironic. She was the only secretary of justice who dared break up the life of luxury being led by convicted drug lords in Muntinlupa, taking away their privileges; and she was legally separated from her husband, which Mr. Duterte did not mention. At the time he was pinning a scarlet letter on De Lima, he blithely ignored that the speaker of the House, his good friend, was having a scandalously blatant affair—even giving his mistress a role in congressional spouses’ activities. Mr. Duterte chose to ignore the latter. Mr. Duterte was bent on destroying De Lima, and used all the powers of his presidency to do so. Who in government would dare question the president?

Certainly not his justice secretary, who actually visited Muntinlupa and talked to the convicted drug lords, and gave orders that they be treated with special care. He wanted them to testify against De Lima. And they did. His successor, the current secretary of justice, does not go to the same great lengths, but does not lift a finger either, to help De Lima. His excuse? Let justice take its course, he says. What justice?