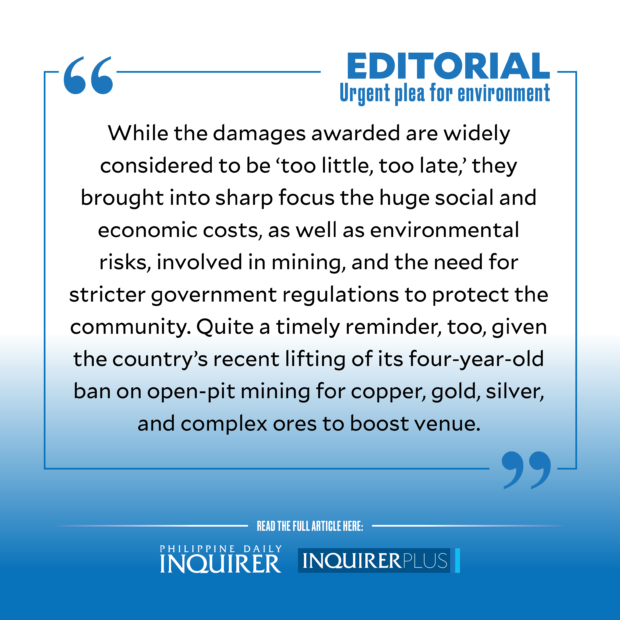 Hailed as “very welcome (but) long overdue,” the recent court ruling against Marcopper Mining Corp. was handed down almost 30 years after “one of the worst mining and environmental disasters in Philippine history.”

On May 16, the Marinduque Regional Trial Court Branch 38 ordered Marcopper to pay P200,000 in temperate damages to each of the 30 plaintiffs affected by the 1993 Marcopper mine spill in Mogpog town, and another P100,000 in moral damages. The mining company was also ordered to pay P1 million in exemplary damages.

The court blamed the mining firm’s negligence in maintaining its Maguila-guila siltation dam, which burst and flooded the Mogpog River and nearby communities with toxic residues of heavy metals.

While describing the court decision as “a major victory for the people of Marinduque,” the province’s representative and Speaker Lord Allan Velasco said the government must continue to exact accountability from the mining firm “for the consequences of its irresponsible mining practices” that led to two major mine spills in 1993 and 1996. Poisoned with mine tailings, both the Mogpog and Boac rivers are now considered biologically dead. Meanwhile, Velasco said, his province mates “continue to suffer the effects of the mining tragedy as evidenced by health problems, making it all the more imperative to come up with stringent and long-term environmental solutions.”

While the damages awarded are widely considered to be “too little, too late,” they brought into sharp focus the huge social and economic costs, as well as environmental risks, involved in mining, and the need for stricter government regulations to protect the community. Quite a timely reminder, too, given the country’s recent lifting of its four-year-old ban on open-pit mining for copper, gold, silver, and complex ores to boost venue.

In Palawan, the Department of Environment and Natural Resources (DENR) early this month canceled the environmental clearance certificate issued in 2007 and 2009 to the Coron Bay Development Project, which the DENR itself admitted was a “minor lapse” on its part.

“The progress of the project should have been closely monitored [by local environmental officials],” DENR Undersecretary Jonas Leones said of the reclamation project that had already covered 40 of its original 48-hectare proposed expanse, when the damage it had inflicted on Coron’s coastal area and ecosystem was discovered.

With government agencies busy addressing the pandemic, the proponents and the provincial government “took advantage [of the situation] to reclaim and reclaim,” the DENR official said.

While the project was halted due to “lack of funds” between 2012 and 2018, it was reinstated by Palawan Gov. Jose Alvarez, who entered into a joint venture with developers for the construction of hotels, docking stations, and other tourism-related facilities in Coron town proper.

The DENR should crack the whip and file charges for violating environmental laws against those responsible for the destructive project that was noted to have already changed the landscape of Coron. According to a study conducted by a marine biologist, 27 percent of corals in the area are now dead, while the rest are threatened by sedimentation.

Similar cases of environmental peril are in the news as well, among them the reopening on June 12 of the P389-million dolomite beach on Manila Bay, despite warnings from health experts of the harm that crystalline silica, found in dolomite, can cause to the lungs, eyes, and skin.

Just as worrying is the possible operation of the mothballed Bataan Nuclear Power Plant that, following the 1979 Three Mile Island accident in the United States, underwent a safety inquiry that revealed 4,000 defects, including its being built near a major geological fault line.

Such issues underscore the need for the incoming administration to include environmental concerns among its priorities because of their immediate and catastrophic impact. Climate change, for one, has unleashed increasingly violent storms, devastating floods, and massive landslides on vulnerable countries like ours. With the typhoon season upon us, it would be timely for authorities to review government policies that touch on these perennial disasters, and reconsider rationalized land use, the protection of natural watersheds, antilogging laws, land conversion, reforestation as part of urbanization, and so on.

Just as urgent is finding and developing cheaper and renewable sources of fuel in the face of skyrocketing gas prices because of the ongoing Ukraine-Russia crisis. Coal as an alternative would mean balding forests, while nuclear energy could have cataclysmic consequences.

Addressing all these environmental ills won’t be easy, and the temptation is to look for short-term solutions to get them out of the way. The real challenge, though, is to take a long view on how to conserve and prudently use the country’s limited resources, given that future generations depend on them as well.